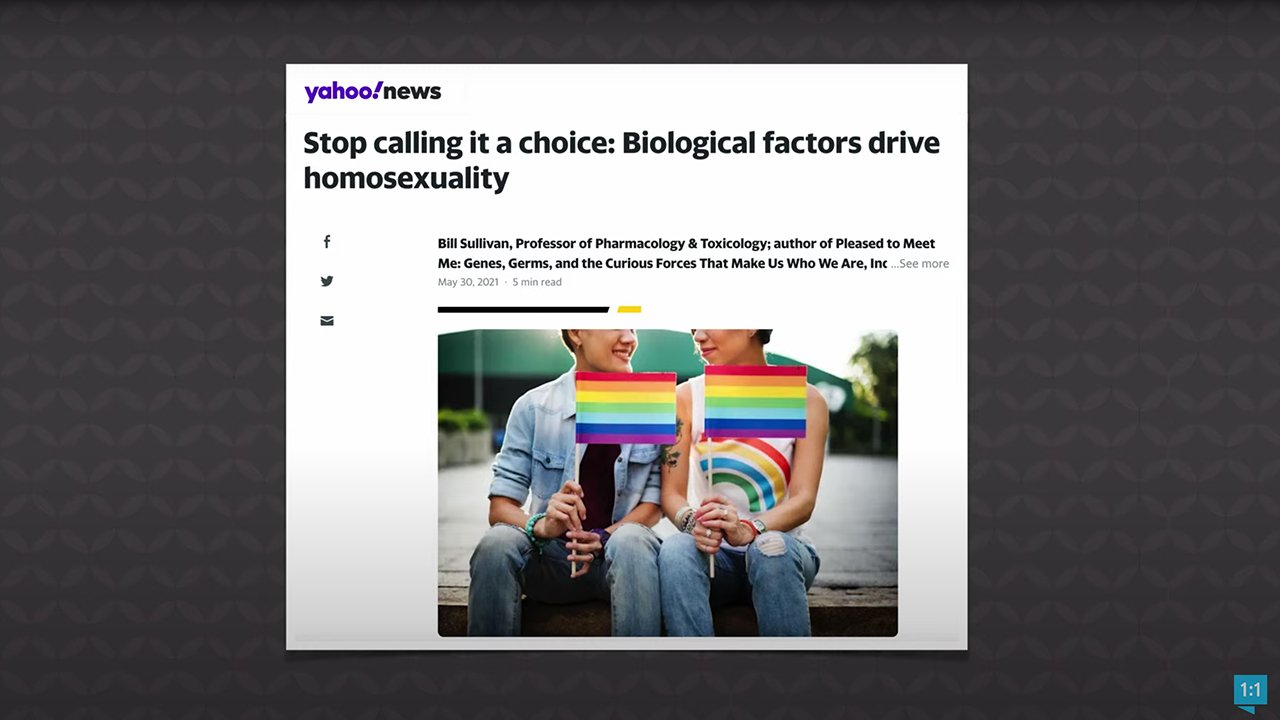 We’ve all heard the argument and seen the rainbow-colored signs—“I was born this way.” As the reasoning goes, people are just born homosexuals and therefore same-sex desires and behaviors are natural and acceptable. A recent article, reflecting on several studies that searched for the elusive “gay gene,” makes this very argument:

However, biologists have documented homosexual behavior in more than 450 species, arguing that same-sex behavior is not an unnatural choice, and may in fact play a vital role within populations . . .

Nonetheless, misconceptions persist that same-sex attraction is a choice that warrants condemnation or conversion, and leads to discrimination and persecution . . .

While there is no single “gay gene,” there is overwhelming evidence of a biological basis for sexual orientation that is programmed into the brain before birth based on a mix of genetics and prenatal conditions, none of which the fetus chooses.

While this article presents the research as clear cut, the truth is more complicated. As Dr. Georgia Purdom powerfully shows in her presentation Are People Born Gay?, the scientific jury is still out on the question of a genetic or biological basis for homosexuality. For example, many of the studies done on the question had a small sample size and only had participants from one ethnic background—and that’s a big problem for research comparing genetic differences between individuals.

Discover more scientific and biblical answers to this question in Dr. Purdom’s presentation, available for free for a limited time on Answers TV. (Our streaming platform is a tremendous apologetics resource—I urge you to try it free for seven days.)

But what if someday it’s unquestionably demonstrated that there is a genetic or biological basis for homosexuality? How should Christians respond? Well, we must understand three truths from Scripture:

Our culture says that we’re “born this way,” but Christ says, “You must be born again” (see John 3:1–17). It’s only through new birth that we’re reconciled to God, given a new identity in Christ, and given freedom over slavery to sin—including those sins that have tempted us from our youth.

So, is there a biological basis for homosexuality? At this point in research, no, there’s not. But even if it turns out that there is: Christ is enough to conquer any sin.

This item was discussed yesterday on Answers News with cohosts Dr. Georgia Purdom, Avery Foley, and Dr. Gabriela Haynes. Answers News is our twice-weekly news program filmed live before a studio audience here at the Creation Museum and broadcast on my Facebook page and the Answers in Genesis Facebook page. We also covered the following topics:

Watch the entire episode of Answers News for June 7, 2021.