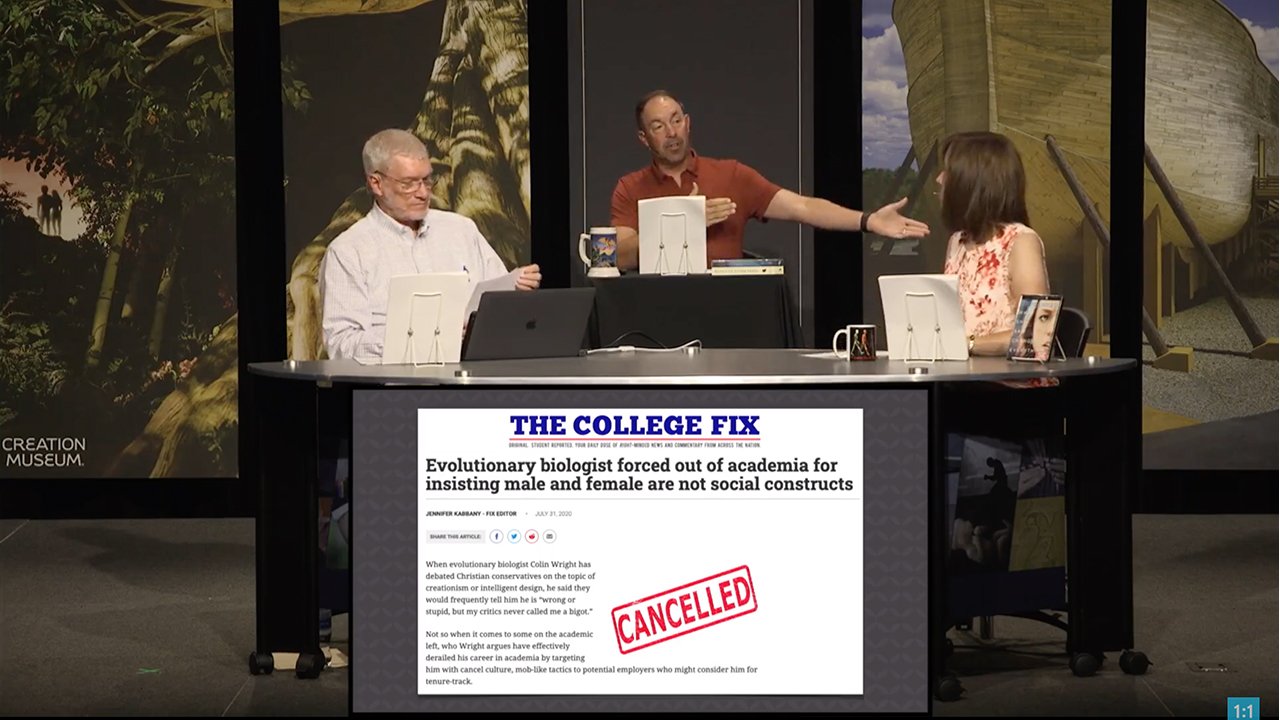 Until very recently the statement that male and female are “real biological categories” wouldn’t have raised an eyebrow. Most of society, academia, and even the political arena accepted without question that there are two sexes/genders—male and female. But now, what was formerly a benign statement about an obvious reality will end your career. At least, that’s what happened to one evolutionary biologist.

[Wright] claims he can no longer find work in academia because he’s been labeled a transphobe or as holding ideas simply too dangerous to risk guilt by association.

Colin Wright—an outspoken critic of creation and intelligent design—claims he has been “canceled” for speaking up on the biological reality of male and female. In speaking out against the transgender ideology permeating and transforming our culture, he claims he can no longer find work in academia because he’s been labeled a transphobe or as someone holding ideas simply too dangerous to risk guilt by association. (Creationists have had this same problem for decades—simply holding to what the Bible teaches, and what is confirmed by science, about the age and origin of the earth and life is enough to end careers; ironically, creationists are falsely called anti-science by people who now claim there are more than two genders of humans, which is anti-science.)

In the fall of 2019, The American Journal of Psychiatry published a study on the mental health outcomes of transgender patients, using the biggest data set to date. This landmark study claimed that while hormonal transition didn’t appear to improve mental health (reportedly this didn’t receive much attention from the media), sex re-assignment surgery did improve mental health. (Now that part received a great deal of favorable media attention!) One author says this study has since been used on social media “against anyone with a dissenting viewpoint to accuse them of being against science.”

But in a much-less publicized turnaround, “the journal retracted its findings, saying a second look at the subject found no improvement.” So, after they looked at the study again, they realized that neither hormones nor surgery actually improved the mental health of transgender individuals.

One senior research fellow explains why the original, now retracted, outcome might have been reached:

Human error is a possibility here . . . But there's also the possibility that there was a preferred outcome for the study. So that they wanted the study to say a certain thing. Obviously, we don't know in this particular instance whether this was just an honest mistake or if this was motivated research, motivated reasoning to lead to a certain conclusion.

As we’ve said before, the ideology of the transgender movement, masquerading as “science,” is nothing more than a massive medical (and I would add “malpractice”) experiment—and many children are victims of this experiment.

Genesis 1:27 teaches that God has created us male and female. There are only two biological sexes—male and female—created by God, separate and distinct, but both equally created in his image. Gender is not on a spectrum and it’s not some social construct, as so many today would have us believe.

Hormonal transition and the mutilation of perfectly healthy organs (known as sex reassignment or confirmation surgery) aren’t the answer to gender dysphoria. The truth of God’s Word and the life-changing message of the gospel are the answer. In Christ, we have a new identity not grounded in how we feel but in who Christ is and what he has done for us.

Learn more about how the gospel is the answer for gender confusion in this presentation from AiG’s Avery Foley:

Watch the entire episode of Answers News for August 10, 2020.