Photo by Ryoji Iwata on Unsplash. 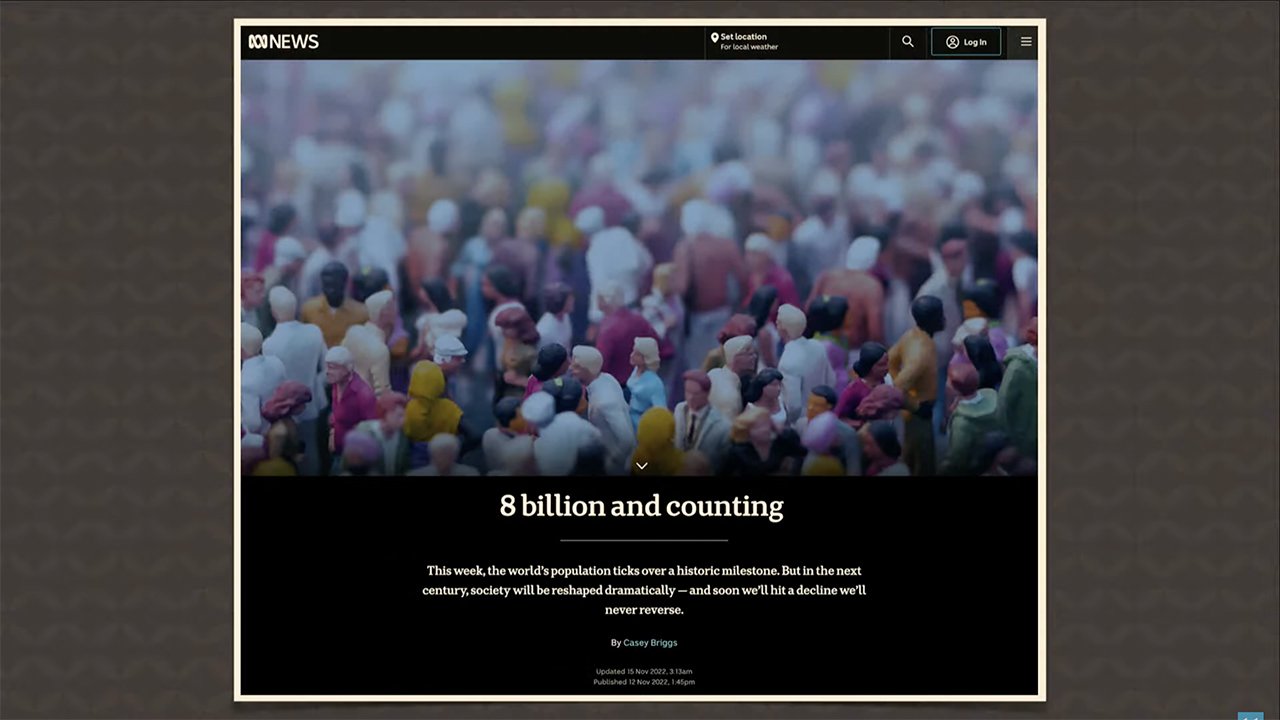 Earth just hit a significant milestone. For the first time ever (that we know of—no one knows what the pre-flood population was), there are now eight billion people on the planet. While this has been celebrated by some people, many climate alarmists, as expected, have been wringing their hands, moaning about the damage that such a large number of people are doing to “Mother Earth.” But how should Christians view this milestone?

Be Fruitful and Multiply

Well, we should view it according to God’s Word. In Genesis, God gives humanity their mandate:

And God blessed them. And God said to them, “Be fruitful and multiply and fill the earth and subdue it, and have dominion over the fish of the sea and over the birds of the heavens and over every living thing that moves on the earth.” (Genesis 1:28)

This charge to have children and fill the earth is then given again after the flood,

”And God blessed Noah and his sons and said to them, ‘Be fruitful and multiply and fill the earth.’” (Genesis 9:1)

In the biblical worldview there is no “Mother Earth.” Earth didn’t give rise to life—God created life. And he formed the earth to be inhabited (Isaiah 45:18) by that life. And the crowning jewel of his creation is mankind, Adam and Eve. Yes, all of God’s creation is beautiful (though now it groans from sin—Genesis 3; Romans 8:22) and he cares for it—but the crown, the most beautiful jewel, is mankind that bears his image (Genesis 1:27)! So, we shouldn’t bemoan what 8 billion people might do to the planet—we should celebrate that there are 8 billion image-bearers of God living on this wonderful planet he made for us!

Also, we recognize that God has given us dominion over his creation. This doesn’t mean we can abuse the earth and do whatever we want, with no thought of the future. Rather it means we carefully steward what God has entrusted to us, using creation for our good and his glory while caring for the creatures that God has made because he also cares for them.

Understanding dominion is important because it puts nature into the right perspective. Nature has intrinsic value because it was made by God and he cares for what he’s made. But it isn’t more important than people who bear God’s image and it shouldn’t rule over us. Instead, we should rule over it for God’s glory.

A Falling Population Is a Big Problem!

Many of the news items reporting on the unknown 8 billionth person’s birth, like this one, highlight that:

While the Earth’s population is growing quickly, the growth rate is starting to slow down. Eventually, it will start falling and our societies will shrink.

We’ve already hit peak child – there will never again be more children alive than there are today, with fertility rates plummeting across the globe.

We’re getting older and older, which means there are fewer people able to work to support more people who can’t.

So, while climate alarmists (whose predictions, it’s worth noting, rarely ever come to be!) are concerned that there are too many people on earth, and others are concerned because declining fertility rates mean fewer young people to work jobs and care for the elderly. A declining birth rate, like we’re seeing in western countries and many Asian countries, is really a bad thing for the future of humanity!

Sadly, this declining birth rate is largely the result of teaching generations of children things like:

I need to add that tens of millions of children have been killed (actually murdered) in the US (an estimated 1 billion worldwide) by abortion. Now that has had a significant impact on future population growth.

All of these ideas run contrary to God’s Word and his plan for the family. But we shouldn’t be surprised—Satan has always attacked marriage, the family, and children!

All of these ideas run contrary to God’s Word and his plan for the family. But we shouldn’t be surprised—Satan has always attacked marriage, the family, and children!

I would also like to point out that humanity’s population size is actually a challenge to the evolutionary worldview. Why?

Well, consider that evolutionists believe modern man has existed for over 200,000 years. And yet, as the article I linked above states, we didn’t hit even a billion people until about 200 years ago. So, for tens and tens of thousands of years, humanity’s size somehow just didn’t grow? Did it stay ridiculously small for an almost incomprehensible amount of time before suddenly exploding in our modern era? That doesn’t make any sense, even with our medical advances!

But consider the 8 billion number through the lens of Scripture. Humanity has only been around for about 6,000 years—and the population dropped to just eight about 4,350 years ago during the global flood. Even using a conservative estimate for population growth, 8 billion is a very reasonable number for us to be reaching in 2022.

Watch the entire episode of Answers News for November 21, 2022.