Is “Evolution Weekend” Needed “Now More Than Ever”?

During a recent episode of our Answers News program, we discussed the upcoming Darwin Day celebrations on university campuses. Answers News is our twice-weekly Facebook Live broadcast (on Monday and Thursday at 2:30 p.m. EST) where Dr. Georgia Purdom, Bodie Hodge, and I look at hot-button news items through the lens of a biblical worldview. I encourage you to watch that discussion above.

For the past 11 years, The Clergy Letter Project has been encouraging pastors and other religious leaders “to celebrate the interface between religion and science” (and by science they mean evolution) in their churches on Evolution Weekend. In a recent blog post, the founder of the Clergy Letter Project, Michael Zimmerman (an atheist, by the way), argues that we need Evolution Weekend now more than ever because, among other things, we live in a time “when ‘alternative facts’ are equated with reality” and “when evolutionary theory continues to be under attack in our public schools.” 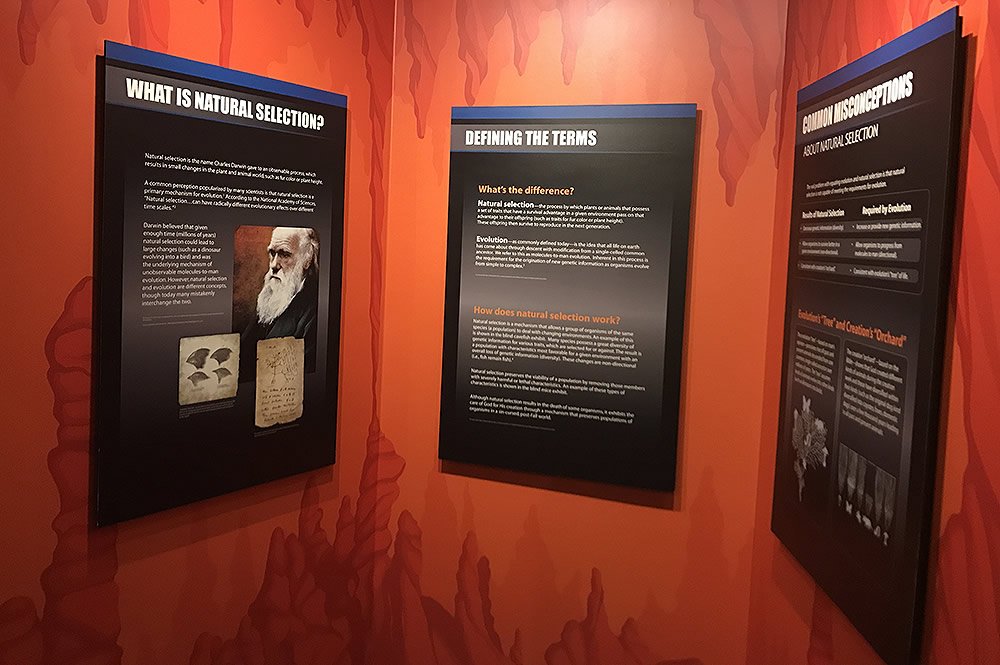 The Creation Museum’s exhibit on Darwin and natural selection.

Now, we’ve often refuted the accusation that creationists deny science—or, as Zimmerman puts it, equate “alternative facts” with reality. Creationists don’t deny science—we love science! Here at Answers in Genesis, we employ scientists who are actively involved in research (two of our staff have PhDs from Ivy League schools), and we publish the peer-reviewed Answers Research Journal to further scientific research and discussion.

What we do deny is the naturalistic, evolutionary interpretation that many scientists impose on the evidence. Zimmerman says “religion and science can strengthen one another,” which we agree with, of course—unless by science he means evolution and by religion he means a rejection of the revealed Word of the eyewitness Creator, which is clearly what he means.

Is Evolution Really Under Attack?

I find it interesting how evolutionists like Zimmerman complain that evolutionary teaching is under attack in public schools when it has been taught as fact for decades in the public education system. And attempts to permit teachers to discuss the problems with evolutionary ideas are often shot down or are sharply criticized.

Not only that, but publicly funded museums and most television documentaries, science shows on television, and science magazines or books teach evolution as fact. If evolution is such a robust and “proven” idea, why are evolutionists so concerned with the possibility of evolution’s problems being taught to students, and why are they worried that students might be exposed to creationist research?

A Biblical Response to Evolution Weekend

Instead of celebrating the idea of evolution—which goes completely against the clear teaching of Scripture—we need to encourage Christians and churches to stand on the authority of God’s Word. God has told us how and when He created, and has given us an eyewitness account of history in His Word. We need to “let God be true but every man a liar” (Romans 3:4) because “[His] Word is truth” (John 17:17).

I encourage you to equip your church with solid answers to the skeptical questions of this day by hosting an excellent Answers in Genesis speaker at your church. Your church will be challenged and equipped to believe and proclaim the authority of God’s Word and the truth of the gospel.

Also, please challenge as many people as you can to watch the new movie Is Genesis History? showing in over 700 movie theaters across the nation on February 23.