Northern Ireland—Days One and Two

Ministry began in Northern Ireland on the evening of November 25. I was speaking at Hillsborough Free Presbyterian Church. This was to be primarily a youth meeting, but the attendees were about half youth and half adults. I spoke on the topic of death and suffering, and there was an incredible response from both young and old alike. Several people spoke to me about their own personal experiences with death of friends and family members. It really did seem to strike a chord in this church.

The next morning, the pastor told me that everyone was still “buzzing” about the talk from the night before. That is always great news. The pastor, in particular, seemed pleased with the message. As it turns out, the pastor, Gary Goodes, is a native Australian. I think I understood him particularly well.

Later on that Saturday morning, I was to participate in an “open air” session in the center of Lisburn. Basically an “open air” is street evangelism. This was to be held at the Lisburn town center. As this is not really my strong suit, I was very apprehensive about the whole thing. Frankly, I can’t remember ever being that nervous. When we arrived, it was windy, cold, and raining. I remember thinking, “Oh, perfect!” I did manage to pull it off, I think without embarrassing myself too much. It is merciful that I was so scared because I really don’t remember much about it.

On the Saturday night, I spoke at the Dunamis Youth Event in Craigavon. There were about 200 in attendance. I did a two-part talk entitled “Do you Really Have Answers?” The group seemed attentive but was not terribly interactive. There was a praise band playing between my two talks, and most likely the youth were there more to hear the band than my talks. By the time we got all the resources packed and put in the van, it was past 11 PM. I did not get back to my room until after midnight.

All in all, it has been a pretty good start to our Northern Ireland ministry. Here are some photos: 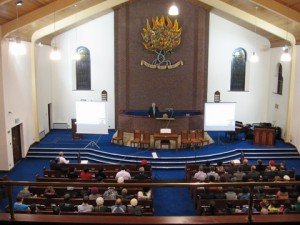 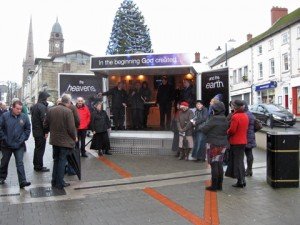 At the "open air" in Lisburn 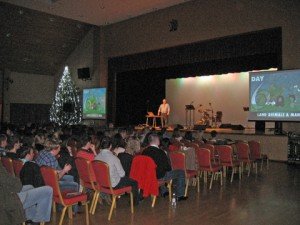