We are still having great ministry here in Northern Ireland.

On Sunday morning Lisburn Free Presbyterian Church hosted us. The pastor there is the Rev. Thomas Martin. He and I seemed to hit it off immediately. We are apparently birds of a feather. He has been an AiG supporter for years and gave his congregation a strong word of recommendation for our ministry.

After the morning service, we were taken away fed an incredible lunch that was followed a few hours later by tea, biscuits, and a birthday cake for our host’s wife.

Sunday night found us back at Hillsborough Free Presbyterian Church. On our return there we continued to hear testimonies from the congregation about how blessed they were by the session on Friday night. It was humbling to hear such nice things said about the message.

After the service, we were again taken for a great meal. In fact, we were fed so well on that Sunday that I finally uttered words that I never thought I would say. I finally had to admit, “I’m full!” (That is very difficult for me.)

Monday was the first break we had from the rain. The sun was actually out for a couple of hours before the rains came again—it was nice while it lasted. On Monday afternoon I had the privilege of speaking to the Scripture Union at Portora Royal School. Sixty or so student attended the lecture, and there was a spirited time of questions and answers afterwards. In speaking to several faculty members, I found out that this school is over 400 years old. Both Samuel Beckett and Oscar Wilde were students at this school. Pretty neat, huh?

That night, we moved on to Enniskillen Independent Methodist Church. Rev. William Park is the pastor there, and it was immediately obvious that he, too, loves AiG’s ministry. Not only is he enthusiastic about Answers in Genesis, but he also makes a great cup of tea!

On Tuesday the rains came again in earnest, but we pressed on. There were two school sessions Tuesday, both in Omagh. The second session was especially well attended, as 70 students and 12 faculty came to a lunch meeting of the school Scripture Union. There were questions and answers in both student meetings.

At the evening meeting on Tuesday, one of the faculty members from Portora Royal School was in attendance. He told me that one young man in particular had been struck by what had been presented the day before, and he had lunch with him that day. The young man had many questions answered by my presentation, and he was anxious to share these things with his teacher. We praise God that the message has been touching the hearts of the youth!

I must admit that as I am writing this blog, I am very tired. I hope to be able to get a little more sleep tonight in preparation for another very busy five days here in the UK. Please pray that not only my body, but my voice holds out as we continue a very full ministry schedule. 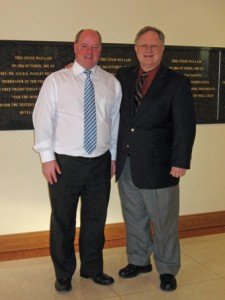 Me and Rev. Thomas Martin 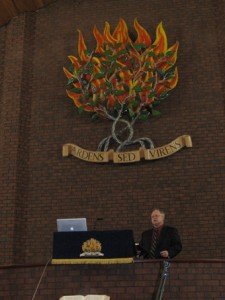 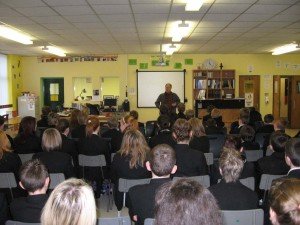 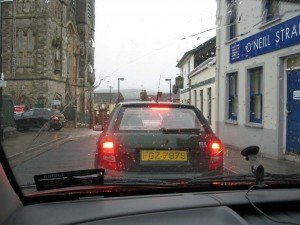