God and the Big Bang Launched in Schools

Recently at the National Association of Teachers of Religious Education, a new resource, God and the Big Bang (published by RE Today), was launched, designed to help school children (ages 11–18) in the UK to explore the relationship between science and faith. Those involved stated:

“The disciplines of science and religion have often been kept separate from each other on the curriculum,” said the God and the Big Bang project co-ordinator Steph Bryant.

“Science teachers have not necessarily felt sufficiently informed to discuss complicated issues concerning different faiths. RE teachers have felt the same about science. This resource brings them together in a creative, dynamic way.”

“God and the Big Bang is first and foremost an excellent RE resource,” said Kate Christopher, national RE adviser at RE Today. “Considering aspects of scientific thinking as well as philosophy and ethics enlarges the scope of conversations possible in RE.1 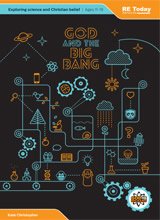 God and the Big Bang: Exploring Science and Christian Belief by Kate Christopher

When statistics show that compromising the Scriptures with evolution and the teaching of millions of years actually leads young people away from the church, it is sad to see Christians publishing and promoting a resource that ultimately tells young people that they do not have to believe Scripture. It is important to point out that the big bang is a secular interpretation of the origin (13.8 billion years ago) and subsequent evolution of the universe. Its very purpose is to explain the universe without a need for a creator. The big bang is based upon philosophical naturalism (the belief that nature is all there is and that everything, including origins, can be explained by time, chance, and the laws of nature) used to interpret observational data. In fact, observational science reveals numerous problems for the big bang, such the horizon problem, spiral galaxies, missing population III stars, and so on.

Most importantly, the big bang contradicts the biblical account of creation in several ways. First, accepting the big bang model is to ignore what the Creator has revealed concerning how He created the universe. The Bible clearly teaches that God created everything in heaven and earth supernaturally by His word within six days (Psalm 33:6–9; Exodus 20:11, 31:17). Second, in the big bang theory, many stars existed for billions of years before the earth, but the Bible teaches that the stars were made (rather than “appeared,” as the dry land did in Genesis 1:9) three days after the earth. Finally, the Bible also teaches that the earth was completely covered with water (Genesis 1:2–9; 2 Peter 3:5); whereas the evolutionary model teaches that the earth started out as molten rock and has never been completely covered with water.

Christians need to be aware that this resource could very well be used in their child’s Religious Education lesson at school. I would encourage you to get equipped and learn how to deal with the arguments against the biblical account of creation, such as the big bang. Two great resources that will help you and your children with this issue are the DVD Heavens Declare: Challenges to the Big Bang or The New Astronomy Book.