The Bishop and the Dinosaur

Last week I was speaking at an event in Carlisle. Before the talk I took the opportunity to visit the Carlisle Cathedral, which was founded in 1122 and is one of the smallest cathedrals in England. In recent years the cathedral, at least among creationists, has become somewhat of an attraction because of creatures similar to dinosaurs that have been etched on Bishop Bell’s tomb. 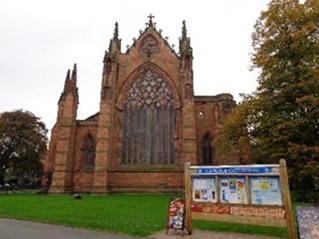 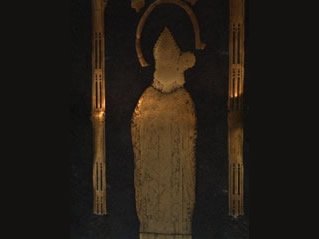 Richard Bell was a bishop at Carlisle Cathedral between 1478–1495. He died the following year in 1496, and is now buried in the floor of the cathedral. His tomb, which is inlaid with brass around the edges, shows a nearly five-foot image of Bishop Bell. Around the edge of the tomb are a number of Latin inscriptions and depictions of various animals, which are clearly identifiable: dog, rat, pig, fish, and bat. 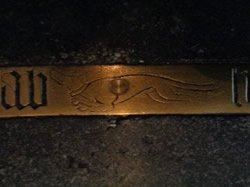 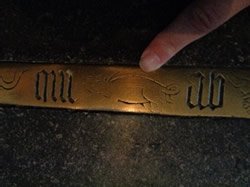 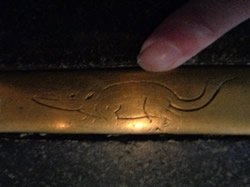 From left to right: depictions of a dog, pig and a rat (although the verger [cathedral attendant] said it was a crocodile).

Most fascinating, however, are the images that are strikingly similar to sauropod dinosaurs. The one on the left has spike-like projections at the end of his tail, resembling a shunosaurus. 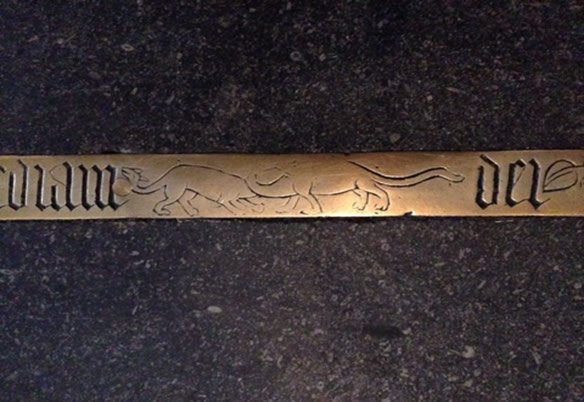 What seem to be two sauropod dinosaurs, although the heads have been worn away by foot traffic over the years.

Interestingly, there is not only a depiction of a dinosaur on the tomb but there are also the depictions of dragons, which are synonymous with what we call dinosaurs, found both inside and outside the cathedral in the wood and stone work. Sadly, because of the influence of evolution, many will not even consider these to be dinosaurs. 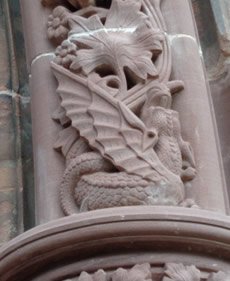 Depictions of dragons on the archway leading into the cathedral.

How could this be since the bishop’s tomb was sealed and decorated over 300 hundred years before dinosaur bones were dug up and became known as a group of animals that roamed the earth? If we accept the Bible’s account of creation and earth’s history, we know that dinosaurs were created on Day Six along with man (Genesis 1:24–31). Noah would have taken pairs of each kind onto the Ark (Genesis 6:19). The dinosaurs would then have left the Ark and lived alongside man until they finally went extinct, probably only a few hundred years ago. 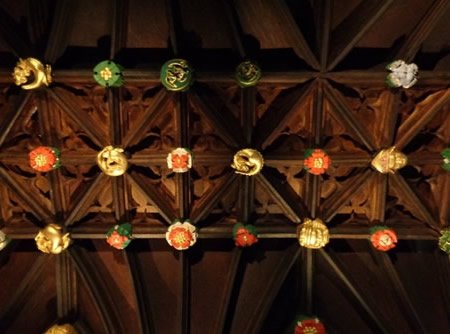 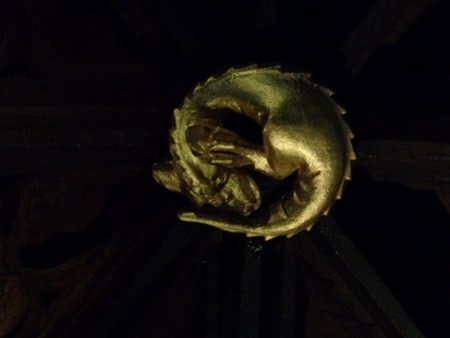 A wood-carved depiction of a dragon in the ceiling.

Some suggest that these depictions are only mythical creatures, but why would the artist depict a mythical creature alongside everyday animals? The artist knew the other creatures so it makes sense that the artist also knew the dinosaur. Also, how could the artisan have portrayed the creature’s anatomy correctly? He could not have simply found bones and assembled them into the proper shape since this happened prior to any scientific reconstruction of fossils. Therefore, the only way the artisans could have done it is if they had viewed the creatures for themselves (or had access to drawings made by other eye witnesses). It is highly unlikely that someone in the 15th century was able to represent a creature that was not discovered until the 19th century. Moreover, this is not just an isolated depiction of a dinosaur since there are many others all around the world.

Ultimately, how you view these depictions depends on your worldview. Because of their naturalistic preconceptions about earth’s history, evolutionists will go to all kinds of lengths to justify their belief that dinosaurs died out 65 million years ago. However, the data suggests the most reasonable explanation is that the people at that time saw these creatures, confirming the Bible’s history.