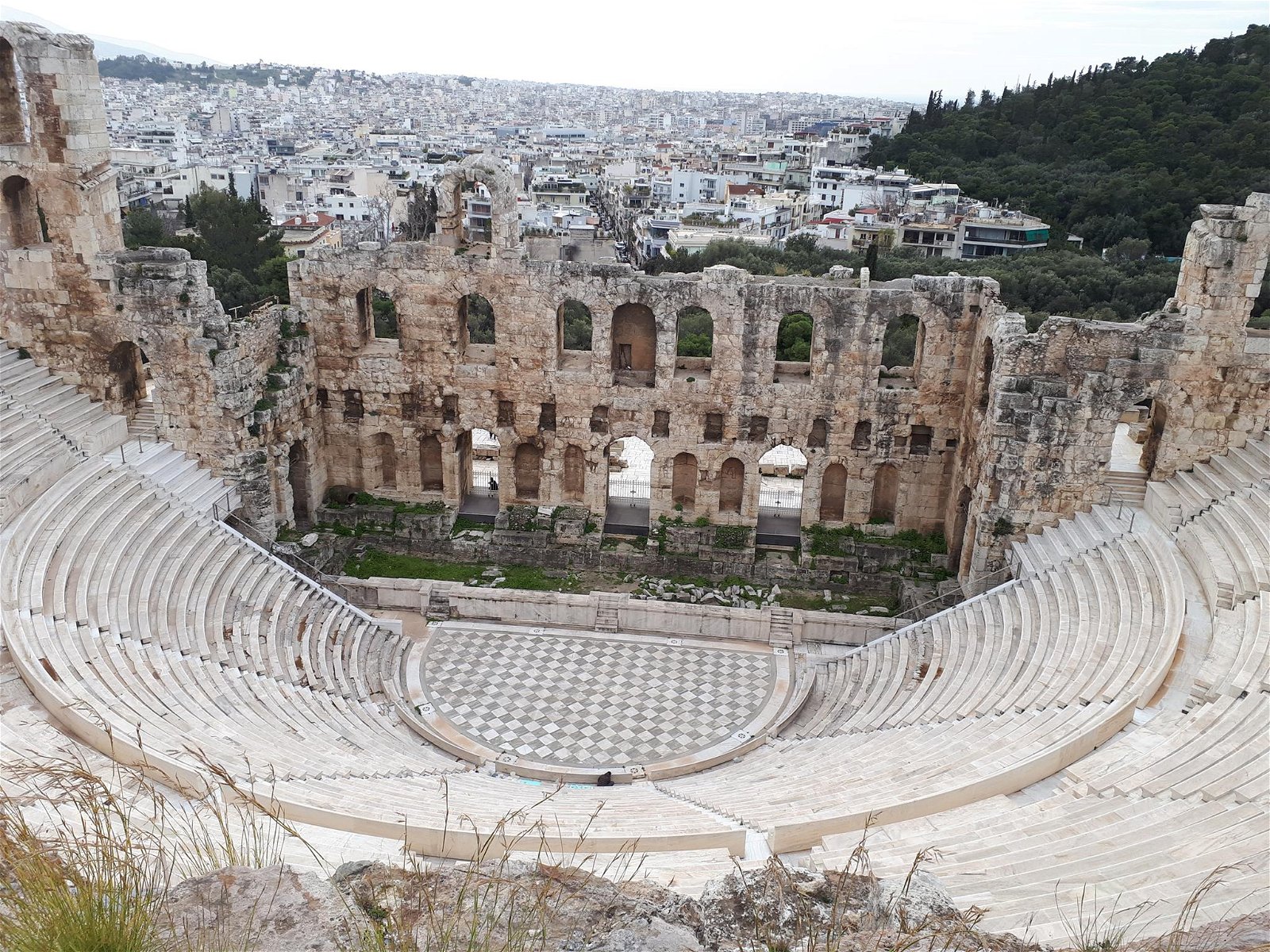 I’ve never been in a grocery aisle like this in Canada, I mused, strolling along the Athenian meat market’s wet concrete floor. Beyond a stack of sheep heads, I could see tables piled high with a scaly riot of—um—fragrant seafoods, dead and alive. As I looked closer, scanning the tangled tentacles which sprawled across a nearby squid table, I realized something important:

Not in love, but down.

This is awkward, I concluded, skidding to the floor (did I mention it was wet?) amidst a chorus of “Ohs!” from onlookers.

“I’m fine,” I announced, leaping upright. A wet swatch spiraled along my shins, mingled with white particles, which reminded me of crushed ice. I didn’t want to perform a klutzy brush-off dance right there, so I scuttled outside and continued walking. Twenty minutes later, I paused to inspect how the swatch was drying. 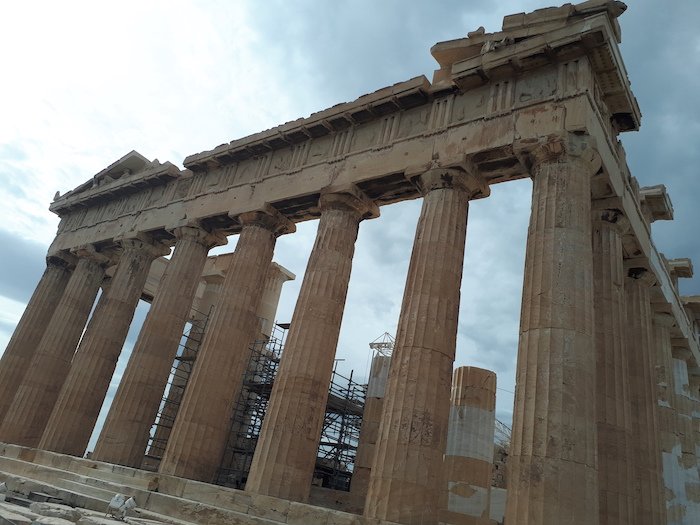 Those white bits were still there.

Bending, I picked one off my shin.

It was a fish scale.

I had been walking around Athens for 20 minutes with my shins covered in fish scales. That would happen.

So, what glorious goal had sent me sliding over slippery surfaces in (no pun intended) Greece? It was the next phase of my mission to backpack 360° around the world in 180 days documenting Christian students’ university experiences. And fortunately, my interviews with local Christians went much more smoothly than my market excursion. But you might say that they were just as meaty.

While a campus ministry leader told me that Greece is only 0.2% evangelical, 81–90% of Greece’s population identifies as Orthodox Christians.1 Still, as a local Bible School student told me, these statistics may reflect cultural tradition more than personal beliefs. Many people, for instance, socially attend church, observe sacraments, and venerate icons—often paintings of Christ, Mary, or Saints. However, the animating radiance of the gospel doesn’t always shine in common understanding or everyday life, despite Greece’s Orthodox veneer.

But wait—wasn’t Greece once a playground of pagan philosophers? How did Greece’s worldview become so Christianized?

The History of Christianity in Greece 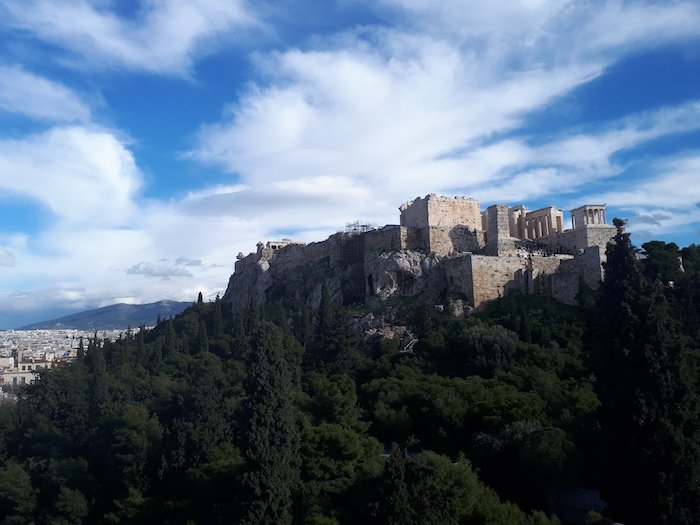 When the Apostle Paul visited Athens, strolling past altars of assorted pagan deities, he stood on Mars Hill and preached a sermon you can read in Acts 17. In those days, the Greek worldview entirely lacked many key concepts from Genesis which pave the way for the gospel, such as sin against one Creator God. So, as Ken Ham’s book Gospel Reset explains, Paul had to begin his gospel message from the foundation of biblical creation when he addressed the Athenians, unlike Peter in Acts 2, who preached to Jews whose worldview already included the Genesis foundation of the gospel—and the need for a Savior.

Despite the Athenians’ initially lackluster response to Christ, churches eventually spread throughout Greece. Originally, as a student from the Bible school put it, “theology was pretty clear and pure—it was Christ’s teaching and the apostles’ teaching. Then, after the 4th century, Christianity became political.”

At that point, she explained, Christianity started assimilating with Eastern religions and gnosticism, a worldview which claims that material reality isn’t important. Infuse this potion of beliefs with a little paganism and classical Greek philosophy, turn up the political heat, and you’ve brewed a doctrine which smells suspiciously unlike historical Christianity.

“It wasn’t about the Bible anymore,” the student summarized. “It wasn’t about Christ as the Messiah. It was about culture. So, the direction went completely wrong. Orthodox means ‘the right faith,’ and it was at first. The Orthodox Church was the first church as we know it, but it changed for these cultural and political reasons.”

Initially, she explained, the Catholic and Orthodox church were one. As the centuries ticked by, however, traditions within this original church began to separate until finally splitting when Rome itself divided into Western and Eastern empires. The Western branch became Roman Catholicism, while the other branch became Eastern Orthodoxy.

Hundreds of years later, the Western branch divided again with a blow from Martin Luther’s hammer. His 95 theses nailed to the Wittenberg church door kickstarted the Protestant Reformation in Western Europe, but no hammer blows echoed in the Orthodox church. In fact, because Greece had come under Turkish authority during the fourteenth to early nineteenth centuries, neither the Reformation nor the Renaissance reached Greece from Western Europe.

“People today think the same as they did hundreds of years ago,” concluded the student. “The culture and mindset and practices are the same, but we’ve just evolved according to social circumstances.”

“Do you think this cultural climate is the same on campuses?” I asked.

“We live in a post-modern world,” she replied. “There is this culture of relativity, with no clear beliefs about the Christian faith. So, most people would say they’re Orthodox, but in the universities, it’s a chaos of ideas and worldviews. Students believe in God and in Jesus’ existence, but they also believe in everything else that culture says.”

Because young people will shape society tomorrow and are the easiest demographic to influence en masse through media and public education today, any group that wants to win over culture must win over students.

In other words, students are the sponges which will paint the future with whatever philosophical hues they’ve soaked up from culture. Because young people will shape society tomorrow and are the easiest demographic to influence en masse through media and public education today, any group that wants to win over culture must win over students. Political groups realize that.

“Most of the universities are public,” my new friend continued, “which means students pay absolutely nothing. All the facilities and professors are provided by the government. But the state is not able to financially support the system they have created. Because of strikes, the universities sometimes don’t work for months. Degrees might take six years. And when you’re not forced to study, you need to find something else to do. This ‘something else’ is what political parties use to encourage students to follow their ideas—especially communism. So, for many Christians going to university unaware, it’s like entering a warzone with no armor.”

Graduates with Marxist leanings, she said, actively operate on campuses to recruit students for communist organizations. And often, these graduates are well-versed on Christianity. As the student explained, they “know what the Bible says, and they know how to ‘prove’ that what Christian students believe is crazy and stupid. Students are attacked by all these lies. They don’t know what they believe. Then, they become like the world.”

This problem may point to a lack of intellectual foundations—training in critical thinking and apologetics, the logical defense of Scripture—for Christian students.

Another Bible School student directly expressed this link between Greek campus climates and students’ need for apologetics, saying, “Atheistic ideas have a great influence in Greece. Most scientists who study physics and biology are atheists, and in the theoretical sciences, many are more communist or Marxist. Most students, meanwhile, are afraid to share the gospel. They haven’t prepared themselves and studied apologetics. So, they stay silent and don’t speak up within the academic communities.”

“How can churches support these students better?” I asked.

“I think the church needs more discipleship,” he responded. “Many people go to church and have youth group, but they don’t have good discipleship to know what they believe—to be stable and rooted.”

Rooted. If students lack strong foundations—if they can’t clearly express and defend their biblical worldview—how can they withstand years of “every wind of doctrine”2 blowing steadily against their beliefs at university?

“Something else that matters,” the student added, “is we need to teach students to spend time with God personally and pray often. Through prayer, we get filled with the Holy Spirit so that God gives us the wisdom, grace, and courage to speak more openly, and it reminds us of Bible verses to help us. And that’s very important. Remember, Ephesians 6 says that we aren’t struggling against flesh and blood, but against spiritual powers.3 So, students need to spend time with God, praying, worshipping, and being filled with His Spirit. In the university, they could have the perfect apologetics and win the argument, but if they aren’t showing the fruit of the Spirit—love—then it’s pointless. Without the Holy Spirit working in their hearts, there is no success.”

And that, I remembered, is one reason why students worldwide talk about the importance of having strong spiritual foundations—a close personal walk with God.

But that’s not the only thing students everywhere were emphasizing. If you’ve hung around my blog long, you can guess what students in Greece were going to highlight next: interpersonal foundations, or a strong Christian support network including family, peers, church, and mentors.

For example, I interviewed a student who had fallen away from God while studying city planning at secular university but who now attended Bible School. This was her advice for other Christian students:

I would tell other students to find really good Christian friends that can stand for them even at the most difficult times when they’re in doubt. And I’d recommend that students find a mentor in church who is older: someone more mature; someone who can give advice; someone who students can speak to openly without having taboos or feeling really bad about discussing or confessing sins. Students need to talk about the things that matter to them, without keeping those questions inside and overanalyzing them alone.”

The Moral of the Story

With its cultural identity rooted in the Orthodox Church, Greece might initially seem to pose few challenges for Christian students. But a long history of compromising Scripture with culture, combined with postmodern morality and an appetite for Marxism, has made Greece a philosophical deathtrap for unprepared Christian students. That’s why locals urge Christian young people to develop strong intellectual, spiritual, and interpersonal foundations—exactly what had been said by Christians I had met around the world.

Imagine what would happen if churches, families, and ministries intentionally discipled students to build those foundations. Think of how that kind of discipleship would guard students against slipping on culture’s slick film of lies—not just to help youth brush off the consequential “fish scales” that gather when their faith skids, but to prevent them from falling in the first place.

Would Christian students in the rest of Europe offer similar insights?