Meet the New Arrivals at the Ark Encounter Zoo

Ararat Ridge Zoo, the zoo located behind the life-size Noah’s Ark at the Ark Encounter, continues to expand here in N. Kentucky. Families love meeting the various animals in the zoo (as well as at the Eden Animal Experience at the Creation Museum), and we’re excited that families will now be able to meet some new arrivals, either on exhibit or during special daily animal programs. One of the purposes of the zoo and animal experiences is to teach families how to have a truly Christian worldview as we examine God’s creation. Today I’m going to give you a sneak peek at the animals that have recently joined our zoo collection.

Here are our new arrivals, in alphabetical order by species, along with a few quick facts our talented animal presenter, Karina, sent me:

We have a new baby at the Ararat Ridge Zoo! Noel the Aoudad sheep was born on December 22 to mother Bathsheba. When the zoo acquired Bathsheba this past August, they had no idea she was pregnant. As a vulnerable species, this is an exciting surprise! Due to health and behavioral reasons, zoo staff had to pull Noel from her mother and are now hand-raising her alongside Dinah, one of our domestic goats, who is acting as a surrogate mother for Noel. 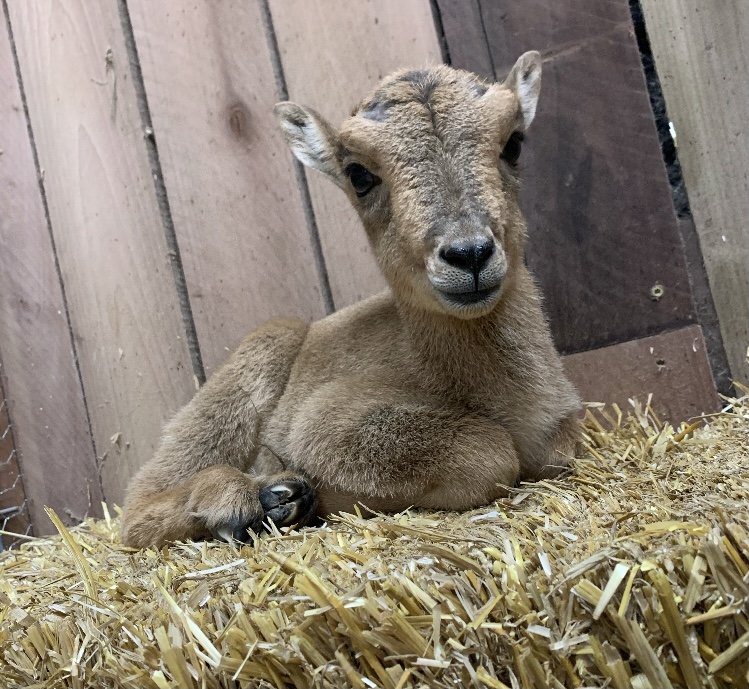 Dinah is an experienced mom and provides comfort and companionship, while our highly trained zoo staff provide regular bottle-feedings, health checks, socialization, and training. Bathsheba is doing well and remains on exhibit with our three other female Aoudads. Once Noel matures, she will rejoin the adult Aoudad herd.

Meet RJ, the Argentine black and white tegu! These large, South American lizards are amazingly active and intelligent. They can run 20 mph and love to swim. In fact, they can hold their breath for 22 minutes! That long forked tongue allows her to “smell” the air, just like snakes do! She eats both plants and meat and has a bite force of 1000 N! She will be featured in our daily animal shows. 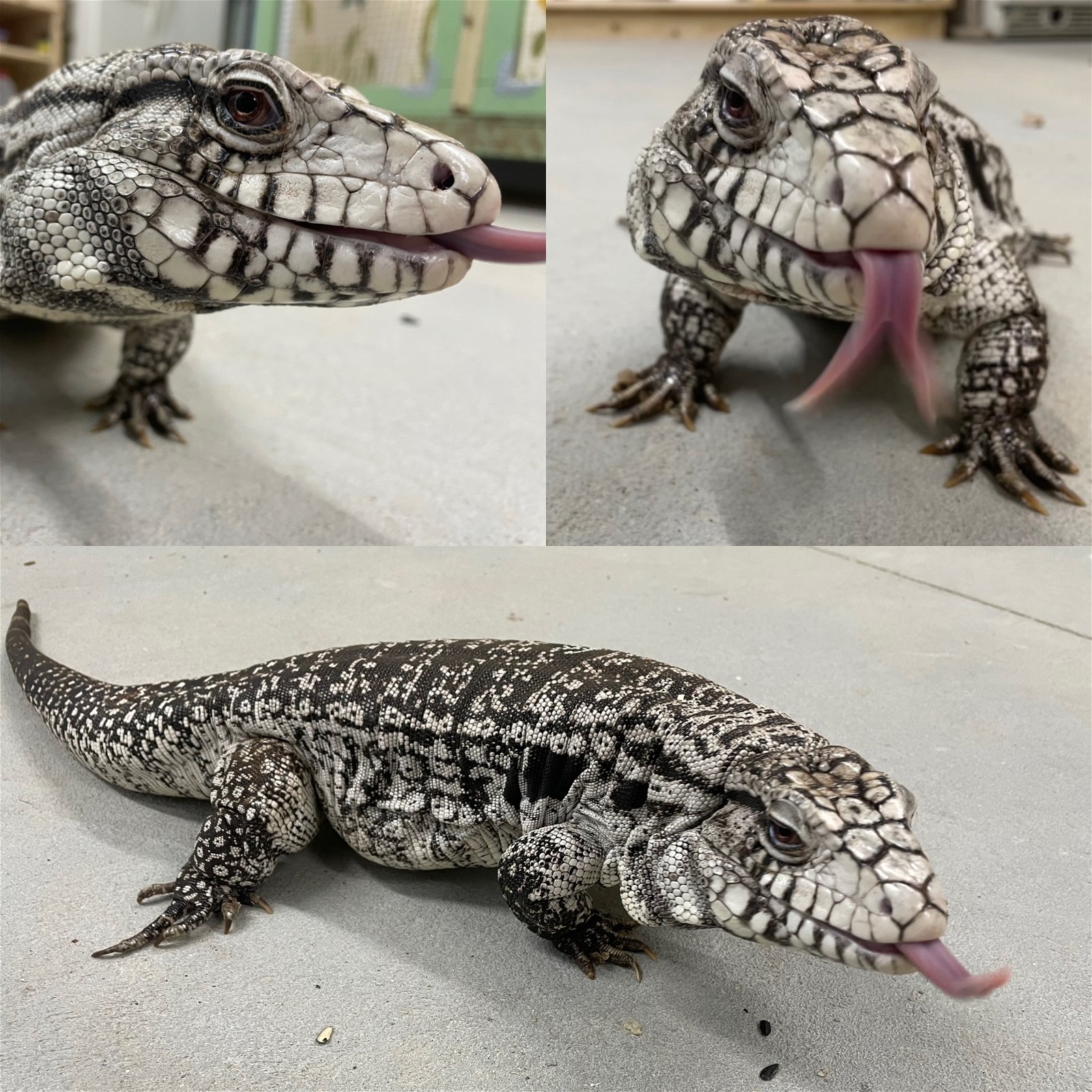 Say hello to Irwin, our new Bennett's wallaby! He will be living in the kangaroo walkabout with our red kangaroo “mob,” as they are called, and will also participate in our daily animal shows. Kangaroos and wallabies belong to the same created kind, but wallabies are much smaller. Bennett's wallabies are native to Australia and are marsupials, which means mothers carry their babies (called joeys) in pouches. When Irwin was born, he was only the size of a jellybean and was blind, deaf, and hairless! 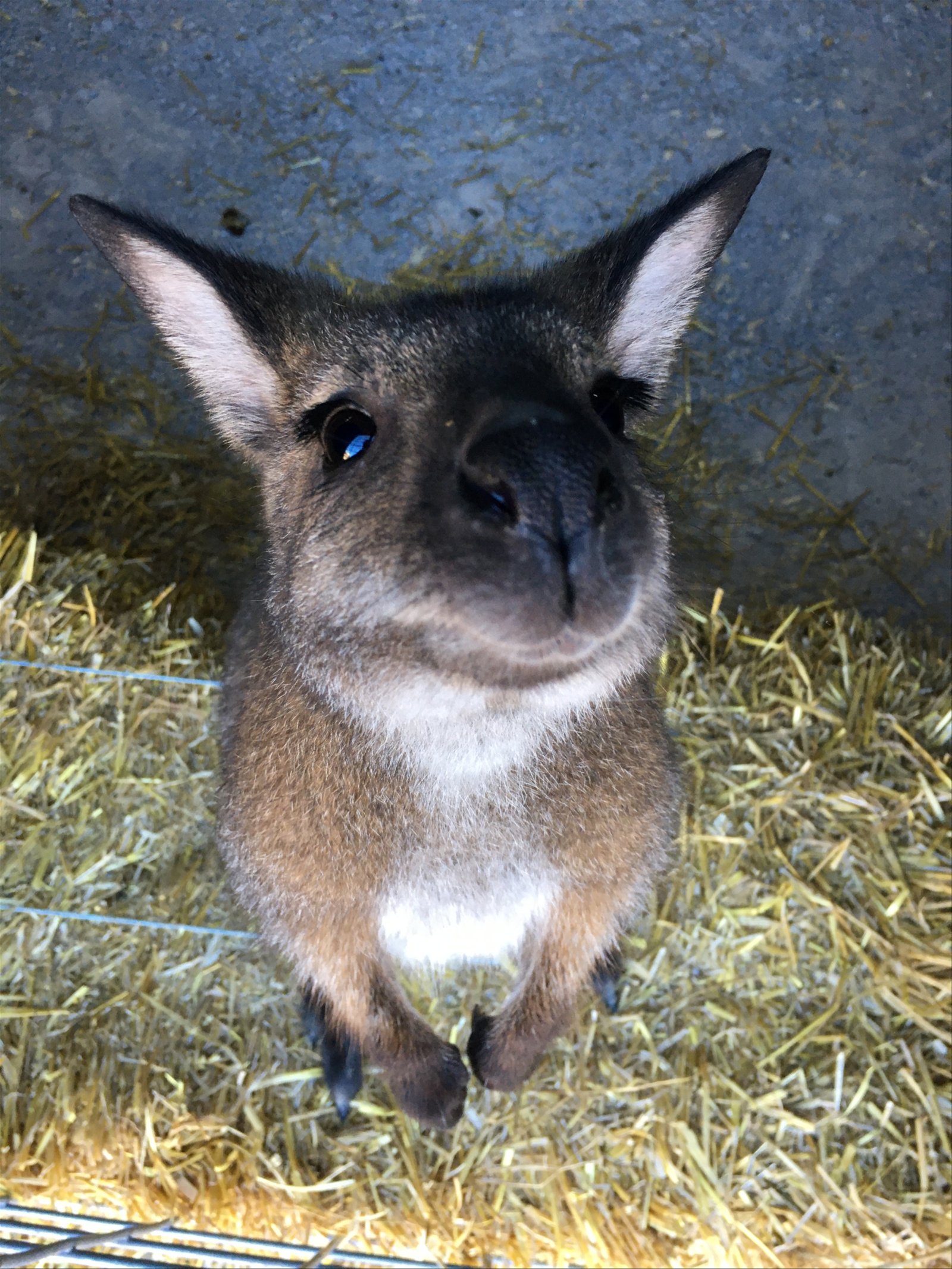 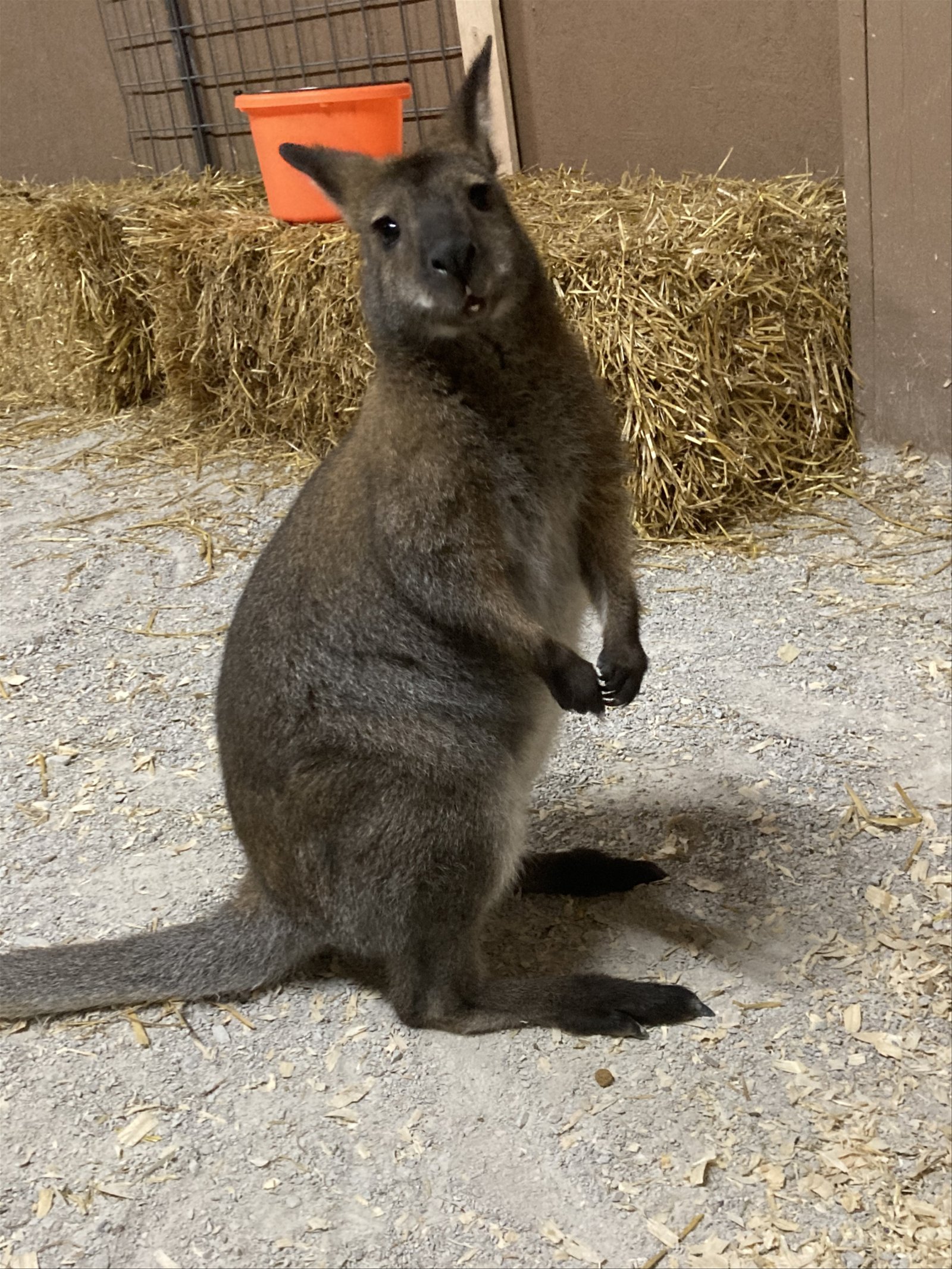 Meet Fluffy the burgundy Goliath bird-eating tarantula! She moved to the Ararat Ridge Zoo from the Creation Museum's Eden Animal Experience. Goliath bird-eaters like her are from the rainforests of South America and are the largest spiders in the world. Believe it or not, she isn't at her full size yet! She will grow to be a foot long, weigh half a pound, and have one-inch-long fangs! 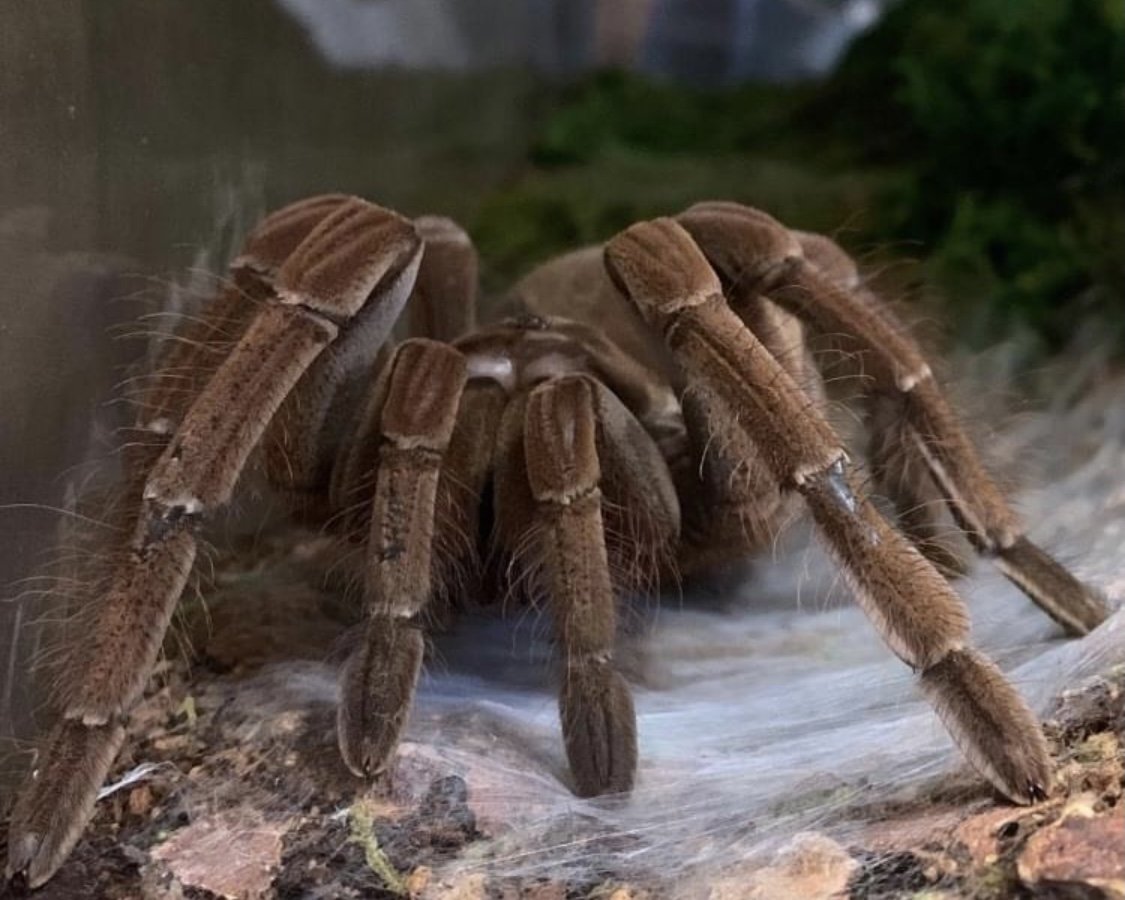 This big girl is Ruby, our new boa constrictor! At 7.5 ft long and 18.5 lbs., she is our largest snake at the Ararat Ridge Zoo! Boa constrictors are native to Central and South America. That long, forked tongue is used to collect scents in the air. They are excellent climbers and swimmers and in a fallen world are ambush hunters, often waiting for prey to approach them before striking. She can swallow something five times the size of her head! Don't worry, she's very friendly, and will be used in our daily animal shows. 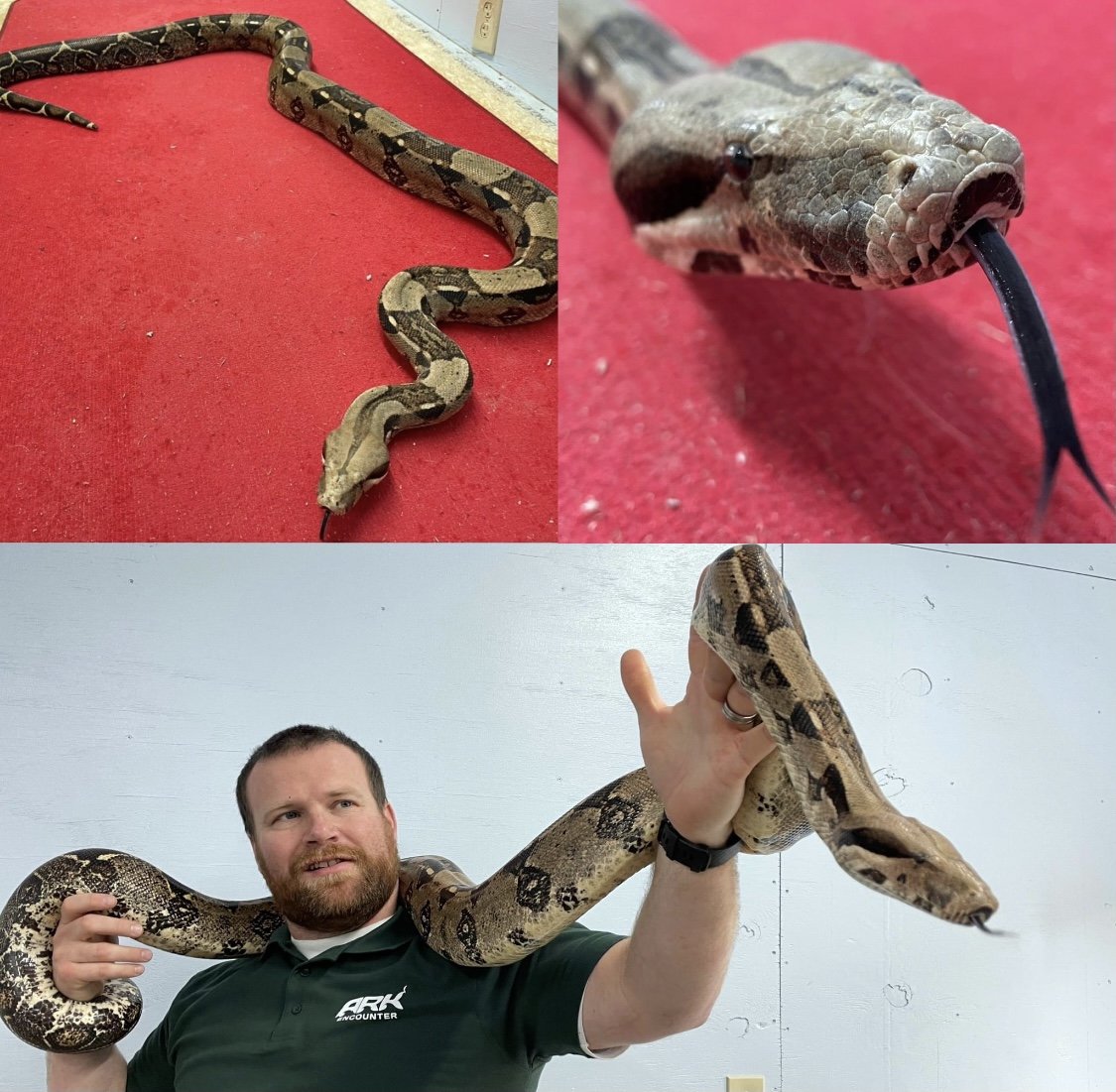 Luna is our new Eurasian eagle owl, one of the largest owl species in the world! They can be found in any habitat in the northern Eastern Hemisphere. She has a six-foot wingspan and a grip of 750 psi—check out those talons! Her wing feathers are specially designed to make her completely silent in flight, allowing her (in our now groaning world because of sin) to sneak up on prey as large as deer fawns. 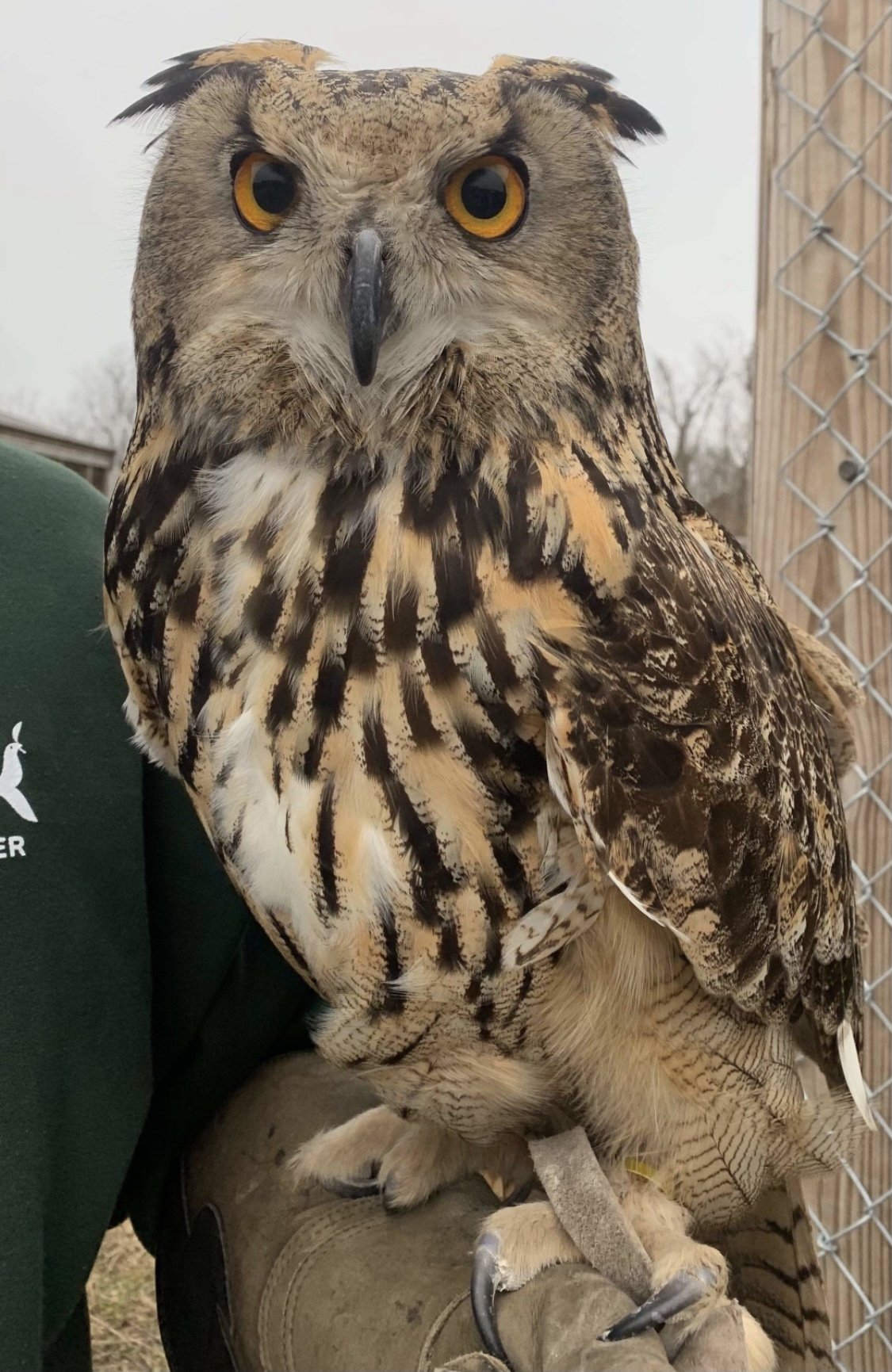 At certain frequencies, she can hear up to 10 times better than humans, and those huge eyes would allow her to clearly see the words on a newspaper across a football field. Owl eyes are fixed in their skulls, so they have specially designed necks to allow them to rotate their heads 270 degrees in either direction to see without cutting off blood flow to their brains. Luna will be featured in our daily animal shows.

Say hello to Tinker Bell, our new fennec fox! Native to the Sahara Desert and the Sinai Peninsula, fennec foxes are the smallest canines in the world, only weighing 2–4 lbs. Those extraordinarily large ears are used to regulate their body temperature and to hear prey beneath the sand. Despite their small stature, they can run 20 mph and achieve standing jumps of three feet in the air! Their paws are covered in dense fur to prevent burning and sinking in sand. Tinker Bell's exhibit is currently under development, but she will be visible to the public soon! 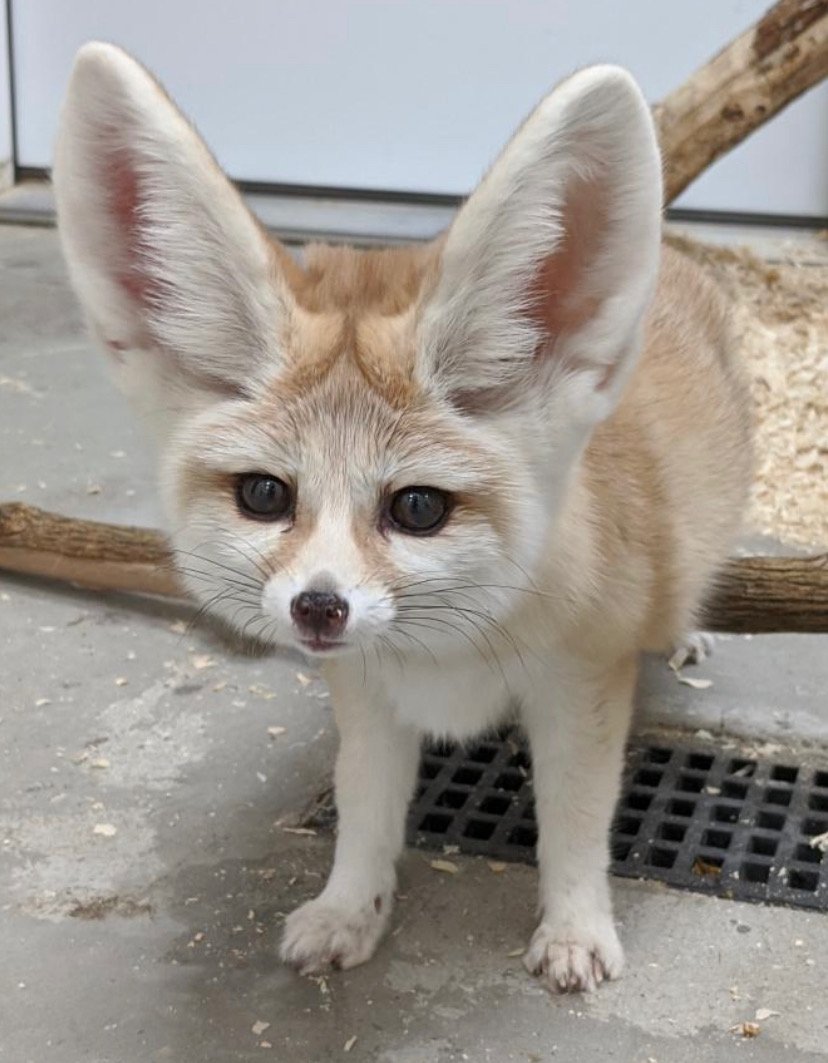 My wife, Mally, recently got to meet Tinker Bell: 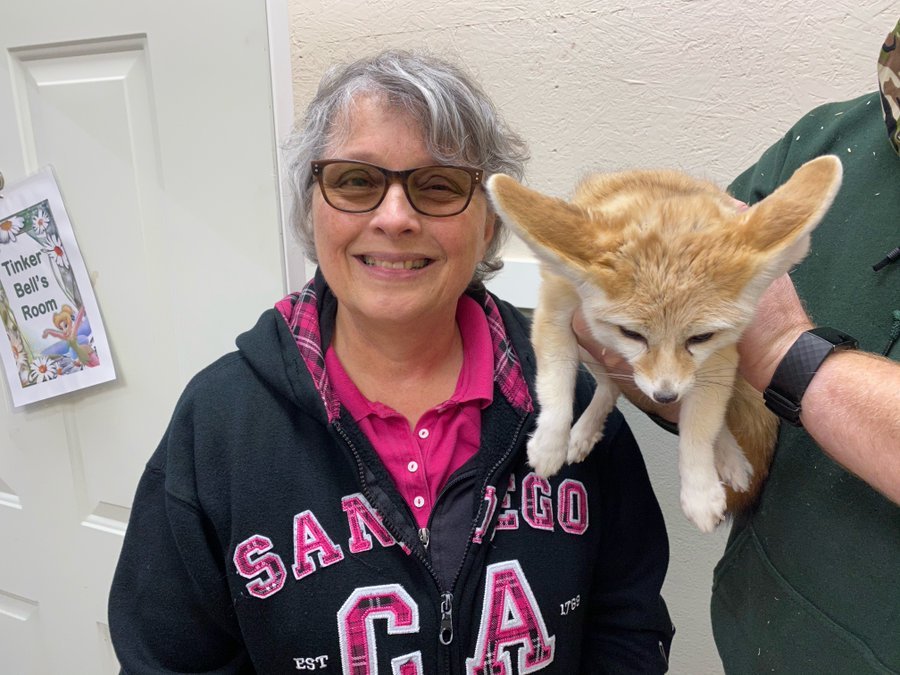 Is it a stick? Is it a scorpion? It’s neither! It's one of the Ararat Ridge Zoo’s new giant prickly stick insects! Native to the forests of northern Australia and New Guinea, these unique insects are specially designed to mimic sticks! When threatened, they will pretend to be scorpions by curling their abdomens over their heads and raising their front limbs to mimic pincers. They also have spines on their back legs to pinch anything that comes from behind and may also click or release an odor that smells like toffee! Females cannot fly but are larger and more prickly than males, which can fly. These amazing insects will be used in our daily animal programs. 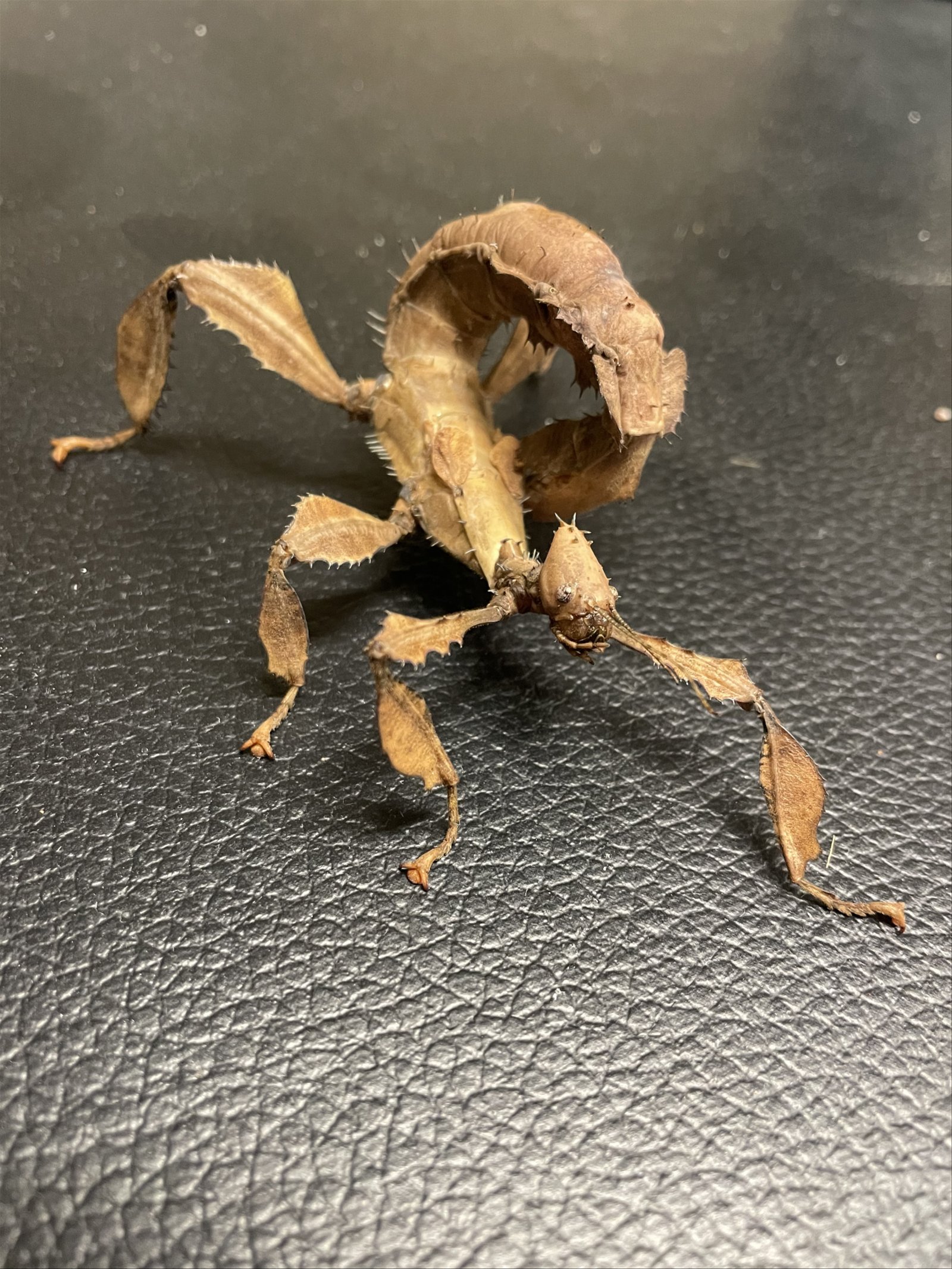 What is that adorable creature? He's a kinkajou! His name is Tiki, and he's a new ambassador animal that will be used in our daily animal shows. Kinkajous can be found in the forests of Central and South America. They are rarely seen because they are strictly nocturnal and live high in the trees. Kinkajous are sometimes called honey bears, but they are actually in the same created kind as raccoons, ringtails, and coatis. They are one of only two carnivores with fully prehensile tails (the other is the binturong, which our zoo will be acquiring later this spring). Although classified as carnivores, they eat primarily fruit and have five-inch-long tongues to slurp up nectar and honey! 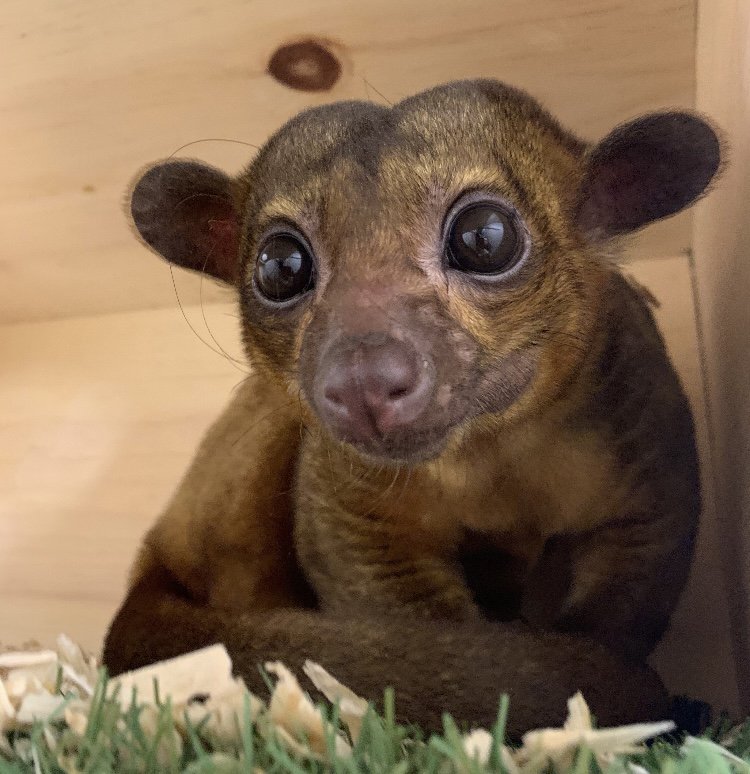 Is that a blue stick? Not quite! It's one of our new metallic stick insects! These unique creatures are native to Madagascar. Males are bright blue with red striping, while females are brown with red spines. Both males and females have tiny, bright-red wings, but they cannot fly. The wings are instead used for display and, when rubbed together, can make sounds. Stick insects have good vision even in dim light, and it gets better as they age. 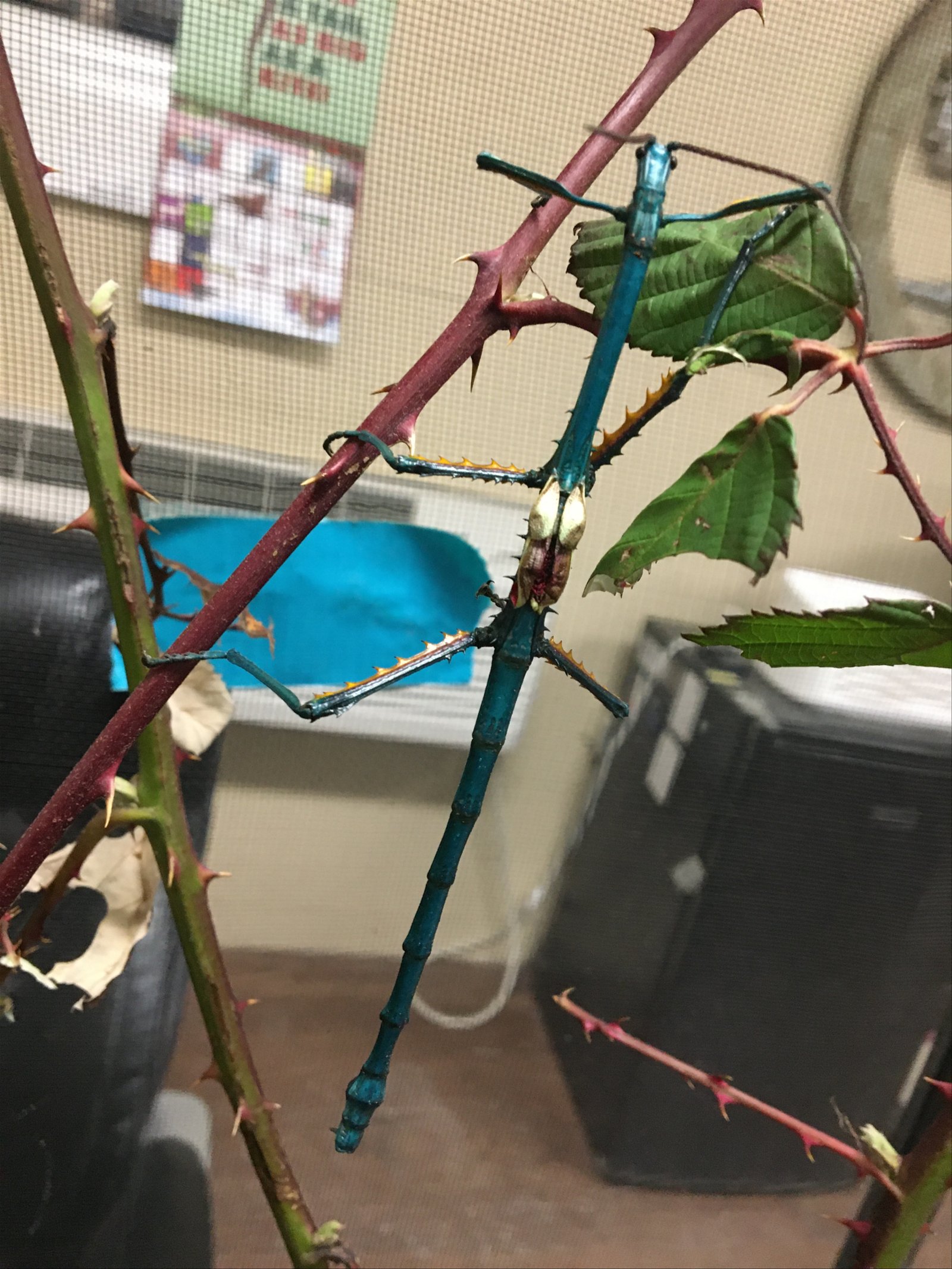 Look closely at this leaf and you'll realize it's not a leaf at all! This is one of the Ararat Ridge Zoo's new Philippine leaf insects! As you can see, they perfectly mimic leaves, even going so far as to have lobes on their legs, veins on their bodies, darkening in color as they age, and sometimes having "bite marks." When they walk, they gently sway side to side to create the illusion of leaves blowing in the wind. Remarkable! Females are larger but cannot fly, while the slender males can fly. 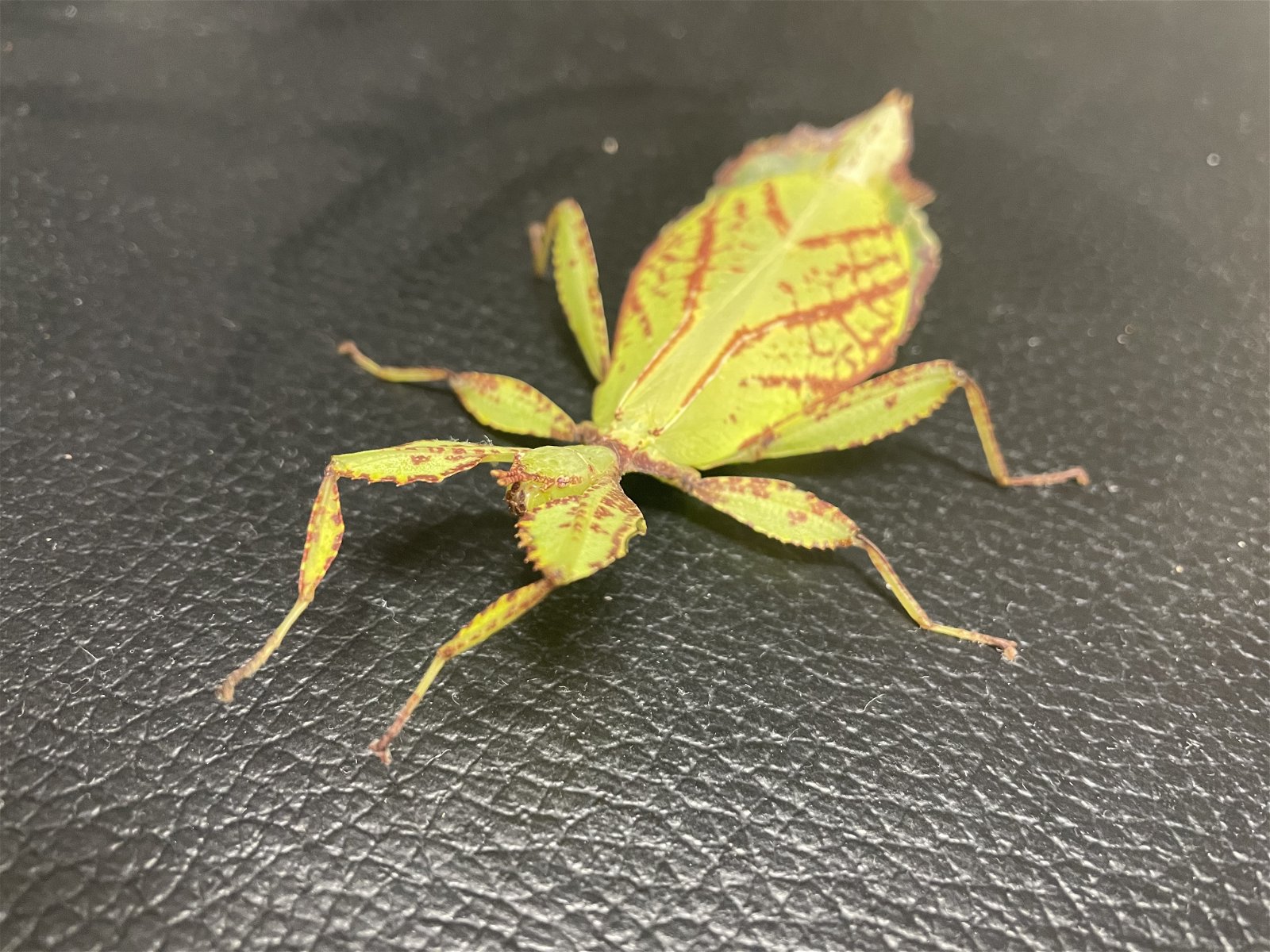 Meet Pebbles, the southern three-banded armadillo! Three-bandeds are the only armadillo species capable of completely rolling into a ball, as seen here. Armadillo means "little armored thing" and you can see why! Her armor is so strong that only jaguars are really capable of doing any damage. These little creatures are native to the Dry Chaco region of South America. 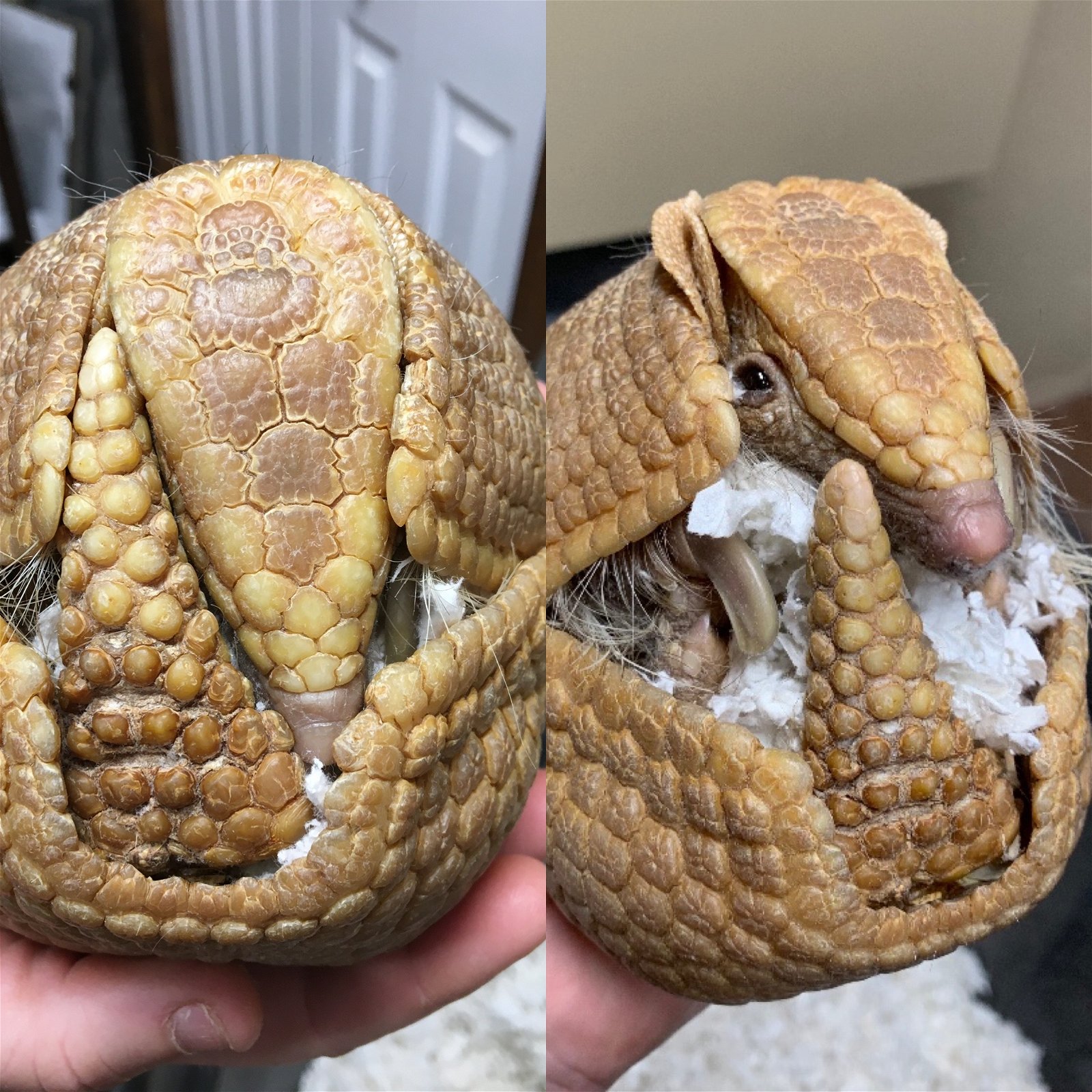 Unlike most other armadillos, her long claws are not often used for digging, as they prefer to steal burrows rather than make them. Instead, they walk on the tips of their claws and use them to tear into termite mounds and old logs to find their favorite food—insects! Her nose is so sensitive that she can smell prey eight inches underground! Pebbles will be used in our daily animal programs.

Say hello to Kuku the Von der Decken's hornbill! Found in the scrubs and savannahs of east-central Africa, these unique birds are playful, intelligent, and vocal. They've been observed dancing in the rain, sunbathing, toying with sticks, tossing leaves and other debris, bill wrestling, or jumping around each other. Males have red bills with cream tips and black edges, while females like Kuku have black bills. As is customary in hornbills, pairs often mate for life. When nesting, males seal their females and their eggs inside tree hollows and leave only a small hole for feeding. Kuku will be used in our daily animal programs. 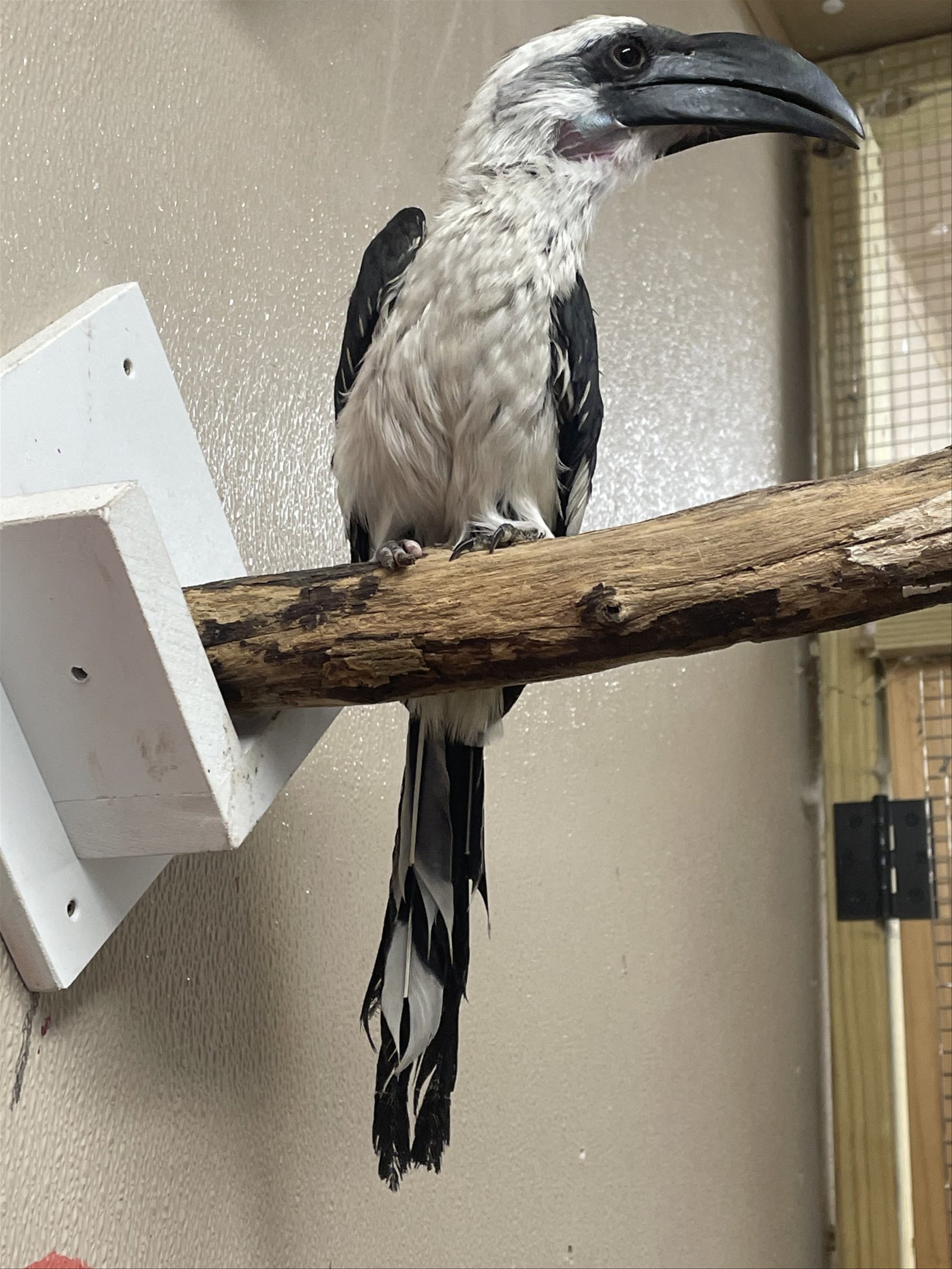 Come and meet these fascinating animals in our zoos when you plan your trip to the Ark Encounter and Creation Museum. And make sure you attend our live animal teaching programs—they are extremely popular with all ages. Remember, too: kids 10 and under enjoy free admission for all of 2021. Plan your visit at ArkEncounter.com and CreationMuseum.org.

And if you want to see more photos of our zoo animals, including behind-the-scenes photos, pictures of Noel the baby Aoudad sheep, and more, be sure to follow our Ark Encounter and Creation Museum Facebook pages. Karina writes those zoo posts, and as you can see above, she’s very knowledgeable about our animals!