Choice for No Sanctity

“I thought I had seen it all, till I read these.” (AiG staff writer)
“I feel sick; I can’t read anymore.” (Mally Ham)
“I’ve never read such vile comments.” (AiG design team staff member)

Let me give you the context for the above statements. Recently I posted an item about phase one of the new Fearfully and Wonderfully Made exhibit that will be open to the public at the Creation Museum on September 25, 2020. This was originally going to be installed in July, but because of the COVID shutdown, we have been delayed by two months. 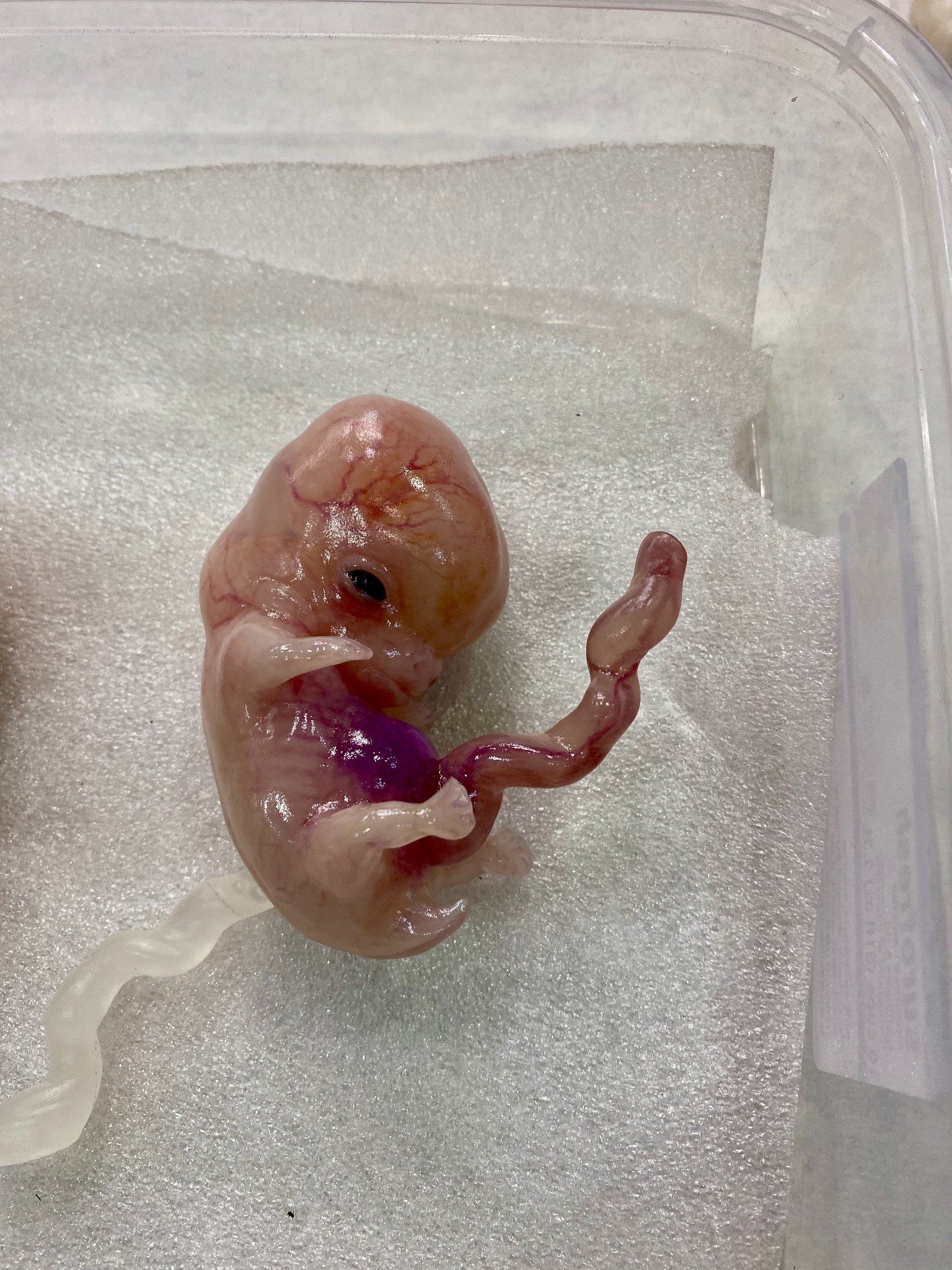 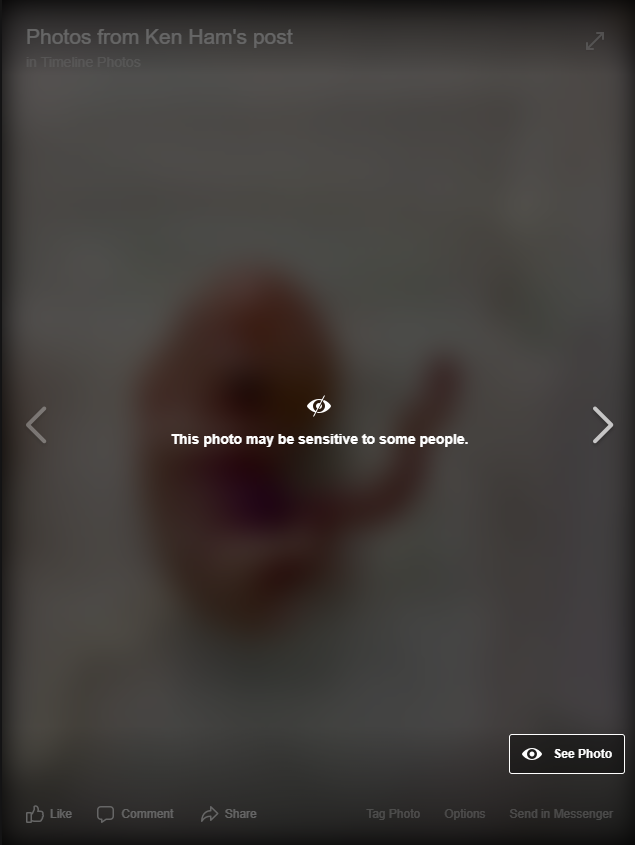 This exhibit is going to be stunning. Our design team (artists, sculptors, etc.) searched for models of the development of a child in a mother’s womb from fertilization, but couldn’t find the quality they wanted. So they spent hundreds of hours of research and produced our own models that can only be described as absolutely spectacular. Our design team even came up with a way to make a number of the models translucent so the organs can be seen inside them. As far as we know, there’s nothing like them anywhere else. This is one of the photos I included in my post. By the way, some atheists reported this translucent model photo, and as you can see, Facebook hid it!

Signs and videos will present information to go along with these models. We believe this exhibit will be one of the world’s most powerful challenges, biblically and scientifically, to those who support abortion. (And abortion is a big issue in the USA in this coming election!) This exhibit will help parents train their children (and grandchildren) to have a truly Christian worldview on this issue and know how to challenge those who support abortion. And this is just phase one.

I was excited to see how these models were being produced and the exhibit as it is being constructed. I took photos and wrote a post on my Facebook page to excite supporters with what’s happening. So many of you supported this exhibit financially, and I wanted to give an update.

After I posted the item (that now has thousands of comments), we saw hundreds of comments as people enthusiastically supported this and expressed how thrilled they were that this exhibit would be opening soon. Then suddenly, many vile, blasphemous, evil, and hateful comments started appearing. We discovered the main reason for this was that someone shared the post with an atheist Facebook discussion group. My Facebook post was flooded with comments so vile that they shocked our staff who are used to monitoring our social media sites to hide and ban those who attack like this. Another startling fact they found was that on checking the profiles of those making these vile, blasphemous, hateful comments, the majority appeared to be women in their 20s. If you’d rather not read the comments, please skip this next section.

Not for the Faint of Heart

We are actually observing the consequences of this across the nation and also in the exodus of the younger generations from the church.

Now, further on I’m going to share just a few of these comments with you. I certainly can’t share many of them because of their language and perverted nature. So why share any of them with you? Well, what really hit our staff who had to deal with these was how evil many in these younger generations are. We all know the X, Y (millennials), and Z generations are much more secularized than the older generations like Boomers, Silent, and Greatest. Researcher George Barna found generation Z (those currently 5–25 years old) are twice as likely to be atheists than any previous generation. We are actually observing the consequences of this across the nation and also in the exodus of the younger generations from the church.

But I don’t think we understand the level of depravity in the younger generations. And yet even that is probably nowhere near what Sodom and Gomorrah had become, or what it was like before the flood when we are told of the world’s population (except for Noah and his family) that “the wickedness of man was great in the earth, and that every intention of the thoughts of his heart was only evil continually” (Genesis 6:5). God doesn’t hide evil from us in his Word but records events depicting human depravity to warn us about sin and its consequences and to teach us to obey God’s Word. The responses to this post were even a wake-up call for us concerning the urgency to do all we can to proclaim the truth of God’s Word and the gospel to this nation.

Our social media monitors estimate well over 100 comments were about eating unborn children. Many claimed they wanted to get pregnant now just so they could go have an abortion, others compared the unborn children to sexual objects, some wanted to burn the exhibit down or mentioned burning the babies themselves, and still others said they’d dedicate their next abortion to me or donate their aborted child as an exhibit.

Before I share just some of the specific comments, I want you to read what one of our staff writers sent to me. Avery Foley helps me write blogs, edit posts, write scripts for my daily radio program, etc. She also gives some talks at the Creation Museum and Ark Encounter and appears regularly on our live Answers News program. She is very aware of the spiritual battle in our culture and yet was shocked at what she observed.

This is what Avery wrote to me:

As two other social media moderators and I sorted through the myriad of comments, I noticed a common theme—nearly all the nasty comments came from people my age, men and women (largely women) who appeared to be in their mid-to-late 20s. Think about that. The future teachers, educators, voters, parents (if they even chose to have children)—really our future society—thinks it’s funny to laugh and joke about not just killing but eating unborn children as if they’re candy or using them as a sex object. It’s horrifying!

They openly laugh at and celebrate the idea that they have the power and privilege to kill that unborn human life.

Not only do individuals believe such depraved things, but they are proud of it—they are willing to put it on social media for all their friends and family, as well as strangers, to see. They know abortion kills a baby, but they don’t care. They openly laugh at and celebrate the idea that they have the power and privilege to kill that unborn human life. If that doesn’t make you weep for the future, I don’t know what will.

As the vile comments began to pour in, I called the manager of my department to determine the most efficient way of curbing the spew of filthy comments. As I shared with him what I was seeing on the post, I couldn’t help breaking down into tears. These people were so callously defending and celebrating the destruction of a life made in the image of God.

While I fielded those comments, my three-year-old son, nearly two-year-old daughter, and my little four-month-old (you can see her in the new exhibit—she’s the cutest of all the babies whose ultrasound footage is featured!) played nearby. Precious little ones, made in the image of God, but so many just like them never have a chance to draw their first breath because their lives are snuffed out in the name of “choice.” And that atrocity was being reveled in by countless individuals with seared consciences right before my eyes. How desperately does our world need Christ and the truth of his Word!

I praise the Lord for our staff who, like Avery, stand on the authority of God’s Word and are at Answers in Genesis because they have a burden to do all they can to reach as many people as possible with God’s Word and the gospel. I’m so sorry our staff had to be subjected to this horrific situation. But this helps you all understand just a little of what happens behind the scenes. Here are just a few comments showing what they had to deal with (warning: graphic): 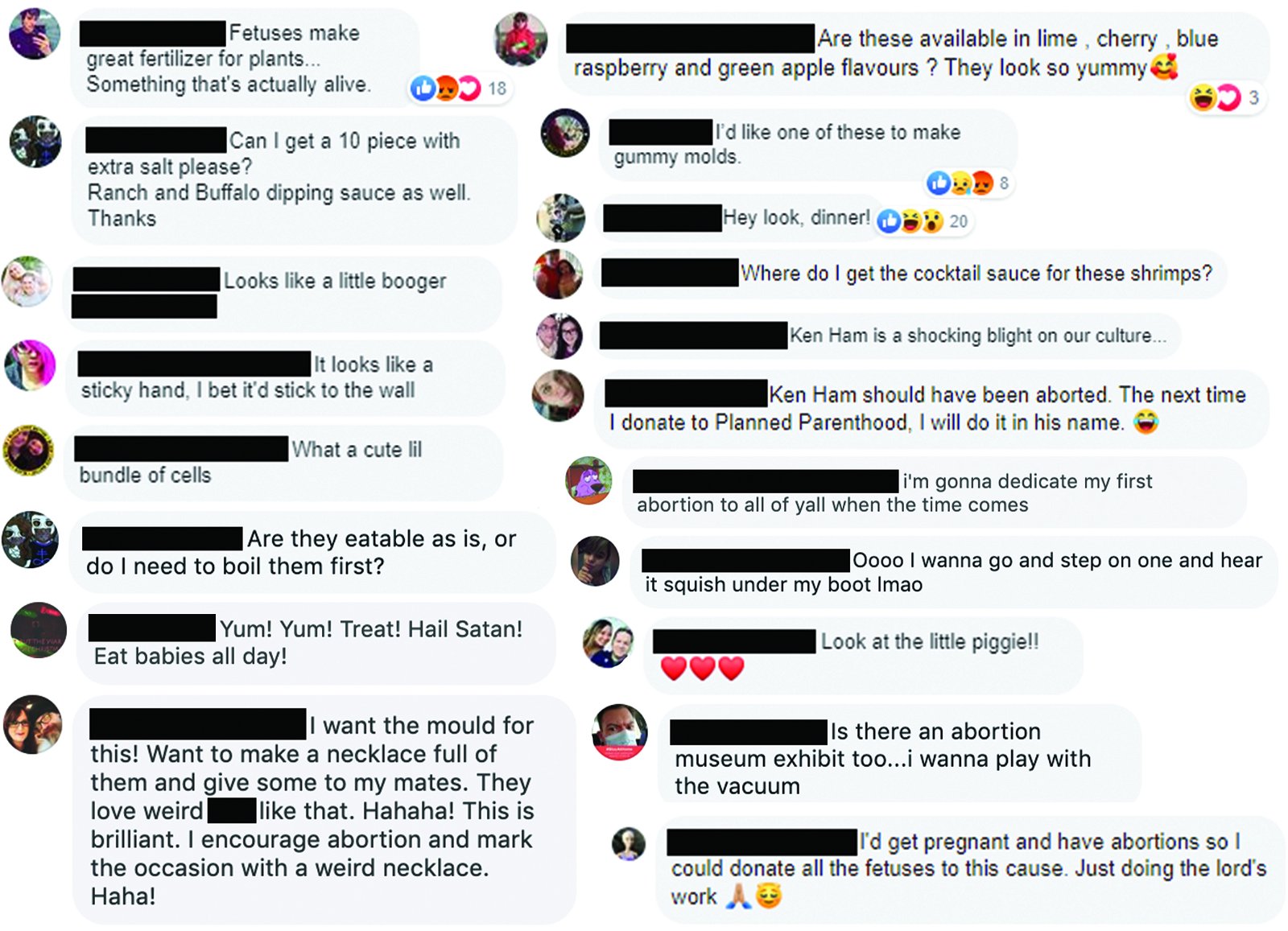 I apologize for even publishing those above. They are vile (and that’s not the worst of them!) and certainly illustrate the depths of depravity of the human heart. But, personally, I just think most people in our churches don’t really understand where many in these younger generations are heading. And can you sense the hatred against God and also the hatred against Christianity? Imagine if they become the dominant people in political positions—and that is already happening.

To me and our staff, this illustrated once again how important the ministry of Answers in Genesis, the Ark Encounter, and the Creation Museum are. And it also shows us how impactful this new Fearfully and Wonderfully Made exhibit will be. Personally, I think a lot of the above comments are generated because of guilt. God’s Word tells us, “For when Gentiles, who do not have the law, by nature do what the law requires, they are a law to themselves, even though they do not have the law. They show that the work of the law is written on their hearts, while their conscience also bears witness, and their conflicting thoughts accuse or even excuse them on that day when, according to my gospel, God judges the secrets of men by Christ Jesus“ (Romans 2:14–16).

When I observe such opposition to what we are doing, it tells me the devil is stirred and hates what we do.

When I observe such opposition to what we are doing, it tells me the devil is stirred and hates what we do. Really, if we are standing boldly for the Lord and fighting the spiritual battle as we should, we should expect such opposition. As I’ve said many times, I truly believe the AiG ministry with its many outreaches, including the two attractions, is at the cutting edge of dealing with this spiritual battle today.

My heart jumps for joy when I see so many people coming to the Ark and Creation Museum and bringing their children, young people, friends, and family (including 30% non-Christian). And I love to see so many people using our books, DVDs, curricula, streaming service, VBS, and Sunday school curriculum to impact lives for the Lord Jesus!

One such resource is my DVD Learning to Think Biblically. This is a recording of a talk that I presented at last year’s Answering Atheists Easter Conference. In the midst of such a fierce battle, Christians must be equipped to stand firmly on God’s Word. This DVD presents a strategy for sharing the gospel in an increasingly secular and hostile world.

Thank you for your prayers and financial support. You have been so faithful to keep this ministry, with its many dedicated staff (like Avery), sustained, so we can continue—and we pray increase—the outreach to fulfill the mission God has called us to.

Previous Article Are You Republican or Democrat? Next Article Día Latino at the Ark Encounter and Creation Museum, September 26 & 27