I recently learned that our 2019 film New Beginning has been nominated in two categories at the 2020 International Christian Film and Music Festival, which is currently planned to run May 13‒16, in Orlando, Florida. The first category is for Best Short Film and the second category is for Best Director (nominee Ben Wilt, the director of our video production team). Over the years, AiG’s talented and dedicated staff has produced numerous award-winning resources. 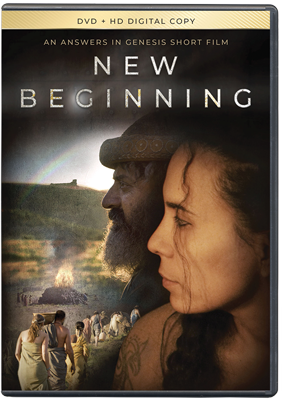 New Beginning tells the biblical account of Noah’s flood and early post-flood years from the point of view of the wife of Shem, the daughter-in-law of Noah. Noah and his family were the only human survivors of the global flood and were thrust into a completely new world once they left the Ark. The film allows you to get a glimpse of the challenges of being pioneers in a world reshaped by the flood. It’s a really emotive look into one of the greatest events in history that will enrich your understanding of Genesis chapters 6–9.

For those who haven’t yet seen the film, it’s available in our online bookstore as a DVD or digital download. And if you’re planning on visiting the Ark Encounter (south of Cincinnati), it is also shown daily in the Answers Center.

Undoubtedly, the stunning sets, breathtaking scenery, captivating performances, and seamless direction of New Beginning are why it was nominated. This short film was produced with state-of-the-art cinematography and was almost entirely filmed on location in Washington State. We guarantee you’ll be thrilled by the quality of this biblically themed drama.