Discover the “Exploding Beetle” in the Newest Issue of Answers

A tiny beetle called the bombardier beetle powerfully demonstrates the glory and creativity of our Creator. This beetle can shoot out a boiling hot chemical cocktail at anything looking for a snack. Pretty impressive for a creature less than an inch long!

This remarkable beetle is featured in the latest issue of our Answers magazine. Dr. Andy McIntosh, a researcher in the United Kingdom, has been researching the bombardier beetle for almost 20 years. You’ll be fascinated by his conclusions! Don’t miss this next issue of Answers. This beetle is also featured in one of the programs presented by our animatronic scientist Dr. Arthur Pod (get the pun?). You can find him in the Insectarium at the Creation Museum.

The first issue of 2020 will also feature an exclusive interview with Abby Johnson, whose story inspired the pro-life film Unplanned. Also, learn more about the famous Chicxulub crater that is supposedly the scar of the impact that wiped out the dinosaurs, and dive into the mysterious case of the bloodless bullet wound (and what forensics tell us about the nature of science). 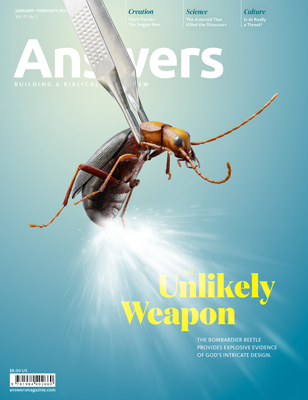 As always, this issue contains a mini-magazine just for kids. They’ll look at everything that makes them unique and be pointed to their Creator, who made them fearfully and wonderfully.

If you haven’t subscribed to Answers, I encourage you to do so today. It’s a wonderful resource for your family to build a more biblical worldview and, well, it’s just plain fascinating! Subscribe today at AnswersMagazine.com.