Pat Robertson, of the TV show The 700 Club, recently made disparaging remarks against young earth creation (this is certainly not the first time he’s done so), calling it “nonsense” and “embarrassing,” affirming he believes the universe is over 14 billion years old. It’s sad to see so many Christian leaders compromising in this area. And since we’re so often attacked, misrepresented, and even slandered by those in the media, I thought I would share with you something very positive—a refreshing article from Decision magazine of the Billy Graham Evangelistic Association. They recently interviewed me and profiled AiG and the Ark Encounter. 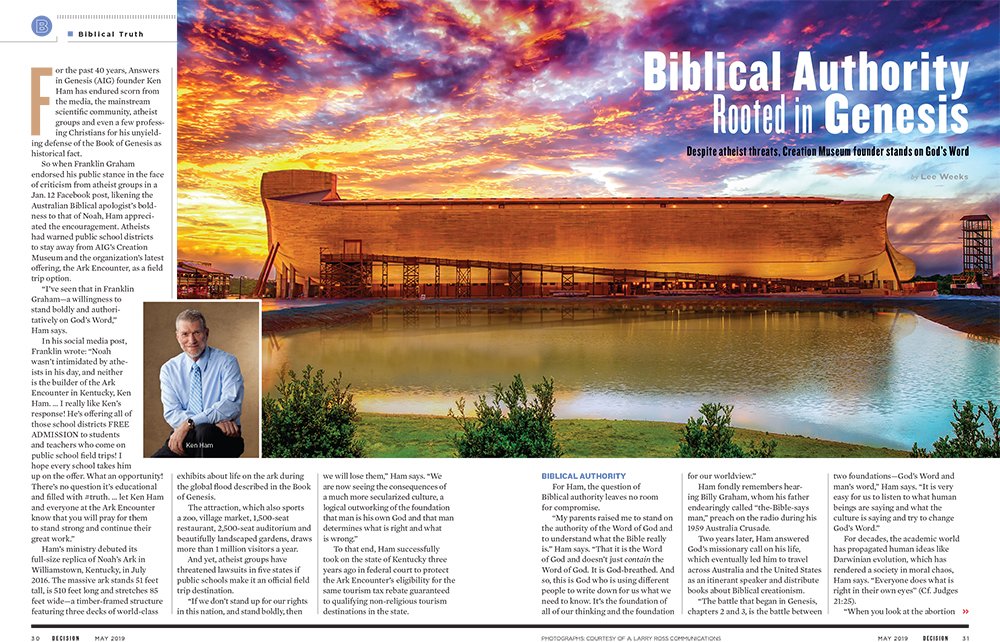 Here are some excerpts from that positive article:

For Ham, the question of Biblical authority leaves no room for compromise.

“The battle that began in Genesis, chapters 2 and 3, is the battle between two foundations—God’s Word and man’s word,” Ham says. “It is very easy for us to listen to what human beings are saying and what the culture is saying and try to change God’s Word.”

For decades, the academic world has propagated human ideas like Darwinian evolution, which has rendered a society in moral chaos, Ham says. “Everyone does what is right in their own eyes” (Cf. Judges 21:25).

“When you look at the abortion issue, or issues of racism, or gay marriage, or the gender issue, they are all really the same symptoms of an underlying problem—we now have generations who have come through an education system basically devoid of the knowledge of God and are being taught a very naturalistic view of origins,” Ham says.

That’s why in 1994, Ham launched Answers in Genesis, an apologetics ministry aimed at training and equipping Christians to articulate a Biblical worldview that debunks evolutionary ideas about creation and amplifies the Gospel of Jesus Christ.

“Our worldview needs to be judged against the absolute authority of the Word of God,” contends Ham, who has written extensively on Biblical doctrine.

I encourage you to check out the full article at DecisionMagazine.com.

Previous Article Did Moses Write the Pentateuch? Find Out in Patterns of Evidence: The Moses Controversy Next Article Free Creation College Expo at the Ark Encounter November 1–2