Did Moses Write the Pentateuch? Find Out in Patterns of Evidence: The Moses Controversy

Who wrote the first five books of the Bible? Well, the answer is found in the Bible—Moses (Exodus 17:14, Numbers 33:2, and John 5:46)! But sadly, most mainstream scholars would say Moses isn’t the author of Genesis, Exodus, Leviticus, Numbers, and Deuteronomy. Many even claim he didn’t have the ability to write. Does that mean the Bible is wrong? 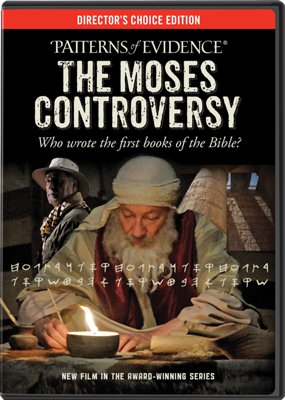 Filmmaker Tim Mahoney embarked on a journey to answer this question and produced the intriguing documentary Patterns of Evidence: the Moses Controversy. You’ll explore questions surrounding the authorship of the Pentateuch, the invention of the alphabet, the early Hebrew language, and more. I strongly encourage you to order this film—it’s fascinating, encouraging, and faith building. And people who saw this at the theater have raved about it. It’s now out on DVD and available from our online store.

Included with the DVD are special bonus features such as a panel discussion and behind-the-scenes footage.

Patterns of Evidence: The Moses Controversy is the powerful DVD companion to the previous film by Mahoney entitled Patterns of Evidence: The Exodus. If you haven’t seen that award-winning film on Exodus, I encourage you to order both Tim Mahoney films together. You can order the combo pack (and save when you do!) from our online store. Watch the trailer and find more related resources at AnswersBookstore.com.