Several months ago, I was invited by a student group to speak at the University of Central Oklahoma. However, after the LGBT group on campus complained about me coming (because I believe marriage is between one man and one woman—which is deemed as hate speech by this group), I was disinvited, despite having a signed contract to speak. This story was carried by news media across the nation, and, due to pressure put on the school, my invitation was reinstated and I, along with Dr. Georgia Purdom of AiG, had a very successful event at UCO. Well, now you can order a DVD of this unique presentation, Genesis, Science, and the Culture War. 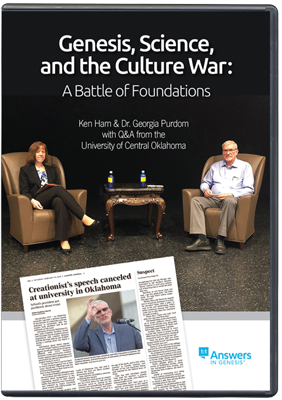 Get equipped to answer some of our culture’s tough questions with grace and truth as you watch Dr. Georgia Purdom and me present on a secular campus. Many people, especially the LGBT community, were expecting us to be mean and intolerant. But we weren’t. We were there to politely challenge their beliefs and to encourage them to consider the gospel message.

Dr. Purdom presented on scientific issues such as natural selection and mutations, and she powerfully showed how these ideas are not examples of evolution in action, as is so often claimed. Her presentation will give you answers to help you share your faith with others.

During the question time after the presentations, I was asked a very specific question by a member of the LGBT group in the audience. Many people later commented on how I answered this question, and it was even written up in a nationally syndicated news article. I believe what Georgia and I did during the Q&A is an example of how Christians should always approach answering such tough questions. As one person commented to me afterwards, “You really disarmed the situation.”

I believe you will be encouraged and equipped with this fascinating new resource. You can order this DVD and hundreds of other resources at AnswersBookstore.com.