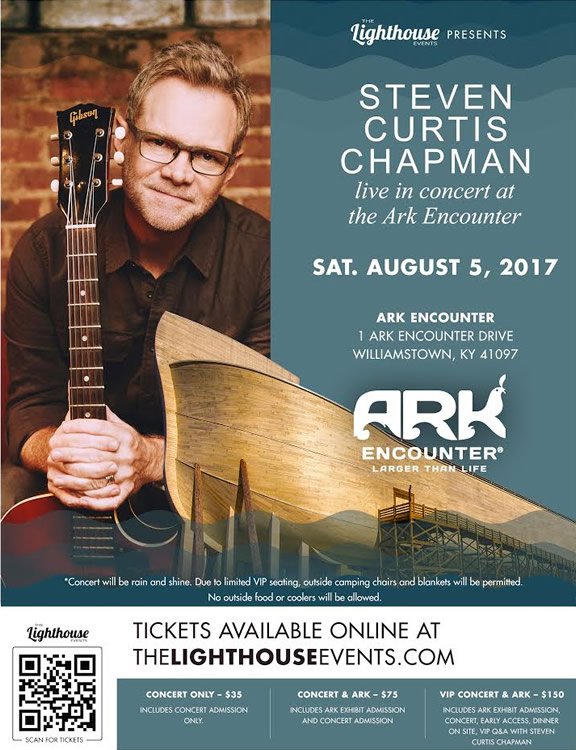 Steven Curtis Chapman, whose impressive award-winning career spans three decades, will also be joined at this concert by the JJ Weeks Band. Imagine the life-size Ark as the backdrop for this special concert—nowhere else in the world could this happen.

There are several ticket options available, including a ticket for just the concert or a combo ticket that includes admission to the Ark Encounter so you can view all three decks of spectacular exhibits inside the massive ship.

And there’s even an exciting VIP option.

And there’s even an exciting VIP option. This combo ticket includes concert admission with special VIP early access, a delicious VIP dinner, and a meet-and-greet Q&A with Steven Curtis Chapman. Also included is admission to the life-size Ark.

Don’t miss your opportunity to meet Steven Curtis Chapman and hear him perform live at perhaps his most unique venue ever—outside the full-size Noah’s Ark! By the way, since almost two-thirds of Americans live within 650 miles of the Ark, we expect people to come from many states to this one-of-a-kind concert at the spectacular Ark on August 5.

Learn more and order your tickets from The Lighthouse Events.

Previous Article What is “The Texan” at Beans Café and Bakery Near Ark Encounter? Next Article Target Sees Consequences of Accommodating Sinful Behavior?