It’s almost Halloween, and the secularists are out scaring up drama about our unique Dino-Bucks and Noah’s Ark gospel tracts. These tracts look like—as one article pointed out—“fake” one million dollar bills (of course they’re obviously fake!). On the back, they feature what the author calls “some pretty rude messages”—i.e., the gospel.

Secularists are acting as if they have just discovered a secret mission of AiG: to reach kids with the gospel during Halloween! We’ve got news for them: for decades now, we’ve been reaching children with the gospel at Halloween (and throughout the year)! It’s almost a shock to these secularists, as if Christians haven’t been sharing the good news of the gospel with the world since Christ’s death and Resurrection! Actually, I have more news for the secularists: the message of salvation was first given about 6,000 years ago as recorded in Genesis 3:15—and has been shared by believers ever since! So, yes, we’re guilty! We’ve been found out! AiG is sharing the gospel with kids of all ages! And yes, Christians have been warning people about a real place called hell for two millennia, because God’s Word does!

The secularists only want children to hear their anti-gospel message! They want kids to be told they’re just animals in an evolutionary death-and-struggle world, bound for a purposeless, meaningless existence, and then oblivion as they die and cease to exist! 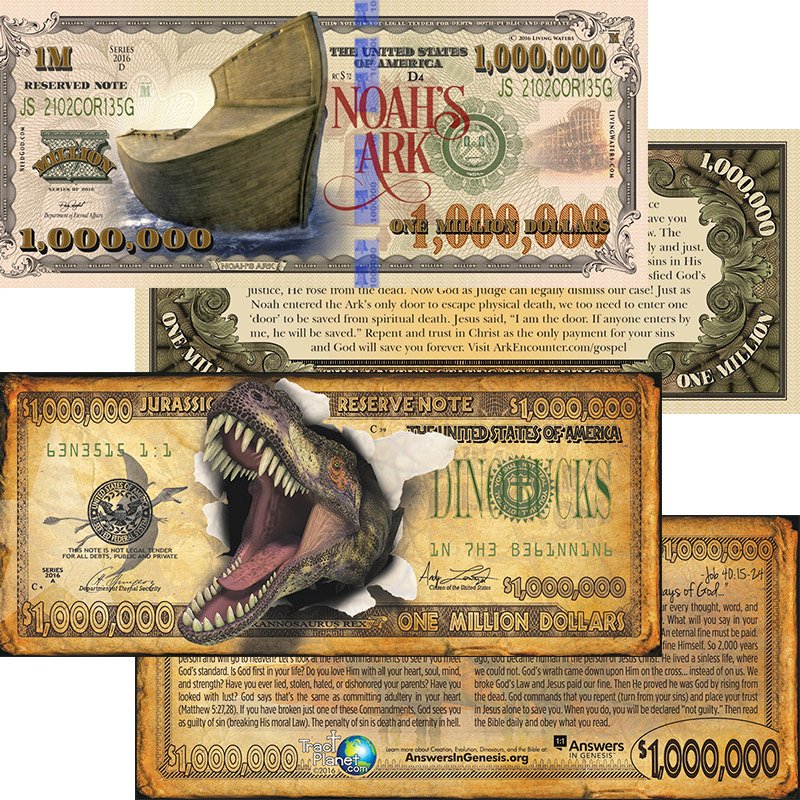 The article states, “Luring [children] with fake money and threatening them with eternal damnation and pain is evil. It’s wrong and it’s abusive.” It’s true that one of our tracts reads, “Have you lied, stolen, or used God’s name in vain? . . . The penalty for your crimes against God is death and eternal Hell.” But these tracts don’t merely tell children about hell (and certainly don’t threaten them)—these tracts ask the “million dollar question” about what happens after death, and tell people how to get to heaven through a relationship with Jesus Christ. That’s the good news. But you also have to hear the bad news in order to receive the good news. What a horrible person a physician would be if he told a dying person that he’s fine. That patient needs to know the bad news that he’s dying in order to realize he needs the cure! The purpose of these tracts is to give the “cure” of the gospel! (Sadly, these secularists only want to focus on the bad news.)

The article accuses me of thinking that “children are wretched, lying creatures” and of “damning children for celebrating a holiday that [Ken Ham] . . . assumes is pagan.” Well, though I wouldn’t put it in those terms, it’s true that all of us, even children, have sinful natures because of Adam’s Fall (Genesis 3). But neither I nor anyone else can send a person to hell—only a person’s sin of unbelief can condemn him to an eternity without God. The point is that God wants to save us from hell!

What’s So Evil About the Gospel?

So what do these secularists find so “evil” about the message on these tracts? Really it all goes back to a worldview. The gospel offends their humanistic belief that man is basically good, and contradicts their belief that this life is all there is. But Scripture is clear that no one is good and that everyone will stand before God in judgment (Hebrews 9:27).

So what do these secularists find so “evil” about the message on these tracts?

By the way, doesn’t it seem rather hypocritical for a culture that is obsessed with demonic Halloween costumes and decorations, enamored with curse words referring to hell, and fascinated by horror movies and haunted houses to criticize the AiG tracts for their “terrifying image of an angry dinosaur” and references to “eternal damnation and pain”?

Of course, no discussion of Halloween would be complete without secularists calling us hypocrites for rejecting Halloween as a pagan holiday but observing Christmas, a holiday that they insist is borrowed from a pagan celebration. (For more information debunking this faulty claim, read Bodie Hodge’s article, “Is Christmas a Pagan Holiday?,” and his book War on Christmas.)

This article and its many accusations remind me of Isaiah 5:20: “Woe to those who call evil good, and good evil; who put darkness for light, and light for darkness.” This Halloween, pray that those who embrace the celebration of fear and death will find peace and life in Christ and His work on the Cross.

At our online store, you can order a pack of Dino Bucks and Noah’s Ark gospel tracts or purchase a Halloween Learn and Share Kit, which contains both sets of tracts, a DVD of Bodie Hodge’s “Halloween, Paganism, and the Bible” presentation, and a pack of A Biblical and Historical Look at Halloween booklets.

These are excellent resources to read and pass out in the days leading up to Halloween or on Halloween night itself. After all, even if you don’t participate in Halloween, children may show up at your door! And if you do open the door to give out tracts, I suggest you not be stingy with the candy (my favorite is Hershey’s Kisses with almonds!).