Abortion rates are dropping across the nation—even in states that are historically pro-choice (really pro-murder of the unborn). New research shows that abortion rates are at their lowest since 1973, when the Supreme Court legalized abortion across the United States in the tragic Roe v. Wade decision.* I praise God that more people are seeing these children for who they are in God’s eyes—human beings!

According to Christianity Today, there are several reasons for the drop in abortion rates. One reason is growing ultrasound technology. The idea of “clumps of tissue” just doesn’t match with an ultrasound picture that clearly shows a baby! Pro-life clinics report that ultrasound machines save the lives of thousands of babies each year. Seventy to ninety percent of women who see their unborn children in an ultrasound choose life for their babies. 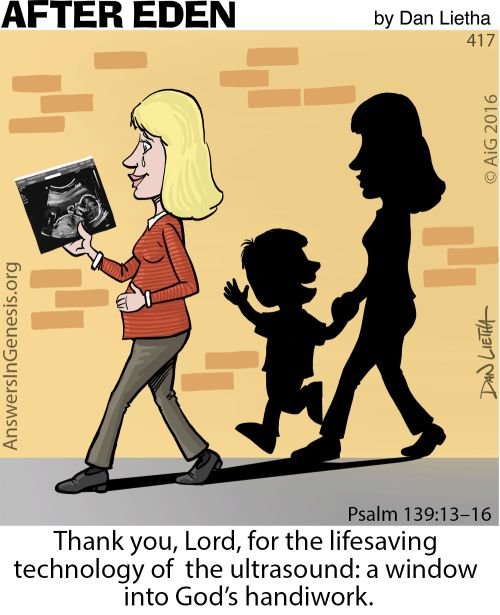 Pro-life groups and legislators have also been working to pass laws that help women to stop and take time to think about their decision before allowing a doctor to murder their child. These laws have helped women to reconsider and choose life instead of death.

And, of course, Christians have been rallying and praying for the lives of the unborn. This has certainly made a difference, and low abortion rates are certainly a reason to thank God!

There’s still so much to be done to save the lives of babies in this nation and in other countries. Ultimately, more laws can be passed and ultrasound pictures can be shown to every woman and man in the nation, but frankly it won’t make abortion go away. The only solution to the problem—like every other sin problem—is the gospel of Jesus Christ. That’s the only hope for this nation and the world. We need to see people build their thinking on God’s Word.

I encourage you to be bold and loving in sharing the good news of the gospel of Jesus Christ with a broken world that desperately needs to hear of His love, grace, and salvation. You can learn more about this good news.

* Like with any research, there are multiple factors that can lead to the decline of or increase of something, and the documentation on such early pregnancies is even reported as incomplete. We are also aware that there has been a reported increase in the use of the “Plan B" pill, which is likely not included in these results. However, we do think the figures given in this study are encouraging and indicative of a decline in the number of babies who are not given the opportunity to be born.