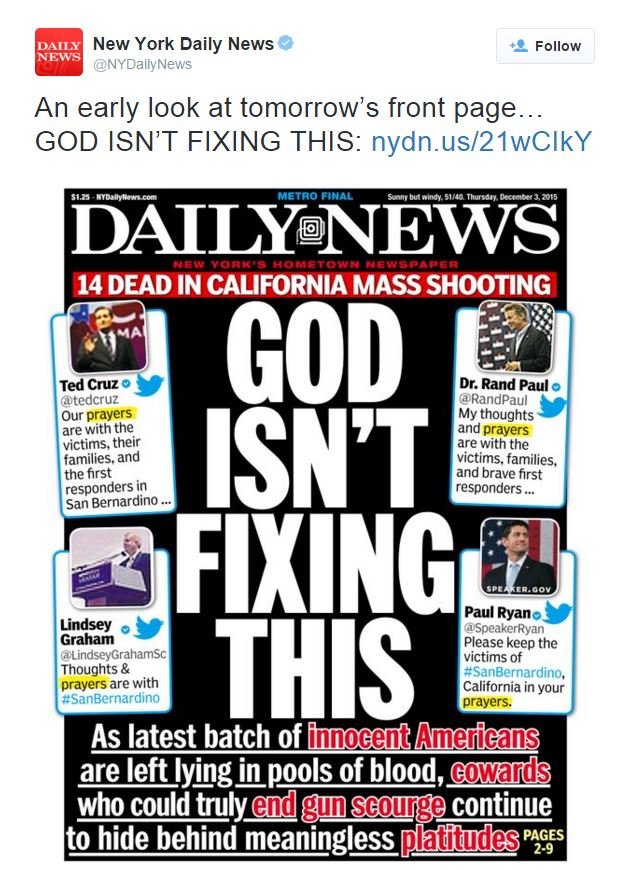 This morning’s cover of the New York Daily News references the tragic shooting in San Bernardino, California, that left at least 14 dead and several wounded. It shows tweets from politicians referencing prayers for the victims but then boldly declares “God isn’t fixing this.”

This front page of a major newspaper is a blast against approaching God in prayer—it’s mocking God and mocking Christianity. It clearly shows where our culture is at today as America becomes more secular. It’s an utter rejection of God and an ignorance of His Word.

The paper’s editors say that “God can’t fix this”—but which God are they talking about? Our culture and government have by and large thrown the teaching of the true God out of public schools, tossed out nativity scenes, crosses, and the Ten Commandments from public places. They’ve largely taken Christ out of Christmas, made it legal to kill millions of children in mothers’ wombs, and our culture shakes its fist at God in regard to His teaching on marriage. Our culture has largely rejected God and has the audacity to say God can’t fix problems.

Our culture refuses to acknowledge we are living in a fallen world (Genesis 3)—although God is not responsible for the tragedies we see all around. God created a perfect world that was ruined by mankind’s sin—it’s our fault in Adam. Our culture by and large refuses to acknowledge God is the absolute authority. Instead we’ve raised up generations of students who believe they are nothing more than animals and that there is no God who makes the rules. Our culture has worked hard to throw the biblical and true teaching of God out of America, and then expects God to protect America!

America needs to repent and turn to God! The only thing that will save this nation is the gospel of Jesus Christ. Hearts and minds need to be changed with the gospel for now and eternity.

Blessed is the nation whose God is the Lord, the people He has chosen as His own inheritance. (Psalm 33:12)

We need to pray for this nation and share the gospel with our family, friends, and neighbors, and raise our children to love the Lord and think biblically. And yes, please pray for the families of those who have been affected by the California massacre.

Previous Article Why Is Evolution Gaining Traction with Young People? Next Article Guess Who Is Coming to Christmas Town?