Lately we’ve highlighted many examples of Christian symbols being removed from the culture in favor of a religion of humanism/atheism. Well, this has happened yet again. According to Fox News, after complaints from the Freedom from Religion Foundation, a Nativity scene that has been displayed each Christmas for forty years outside of a Dallas, North Carolina, courthouse was recently removed. And in Jay, Florida, again after complaints from FFRF, a Nativity scene was taken down from City Hall property where it too has been displayed for nearly 40 years.

A statement from the Co-President of FFRF says it all: “We’d like to thank the 'wise men' and women of the town council for doing the right thing, and ensuring that everyone in Jay can visit city hall without feeling like an outsider in December.” But the reality is, the FFRF is completely intolerant of Christianity and is trying to wipe out any symbol of Christianity from everywhere they can. They want their atheism imposed on the culture. How do those who have enjoyed the festive display for 40 years now feel? Do they now feel like outsiders? Why is it that an atheistic group that receives tax benefits from the government (as they are a 501(c)(3) organization) can force its religious ideas on the culture to the exclusion of other beliefs (such as Christianity)?

In removing the Nativity scenes, the towns have not established a neutral position—there is no neutrality! You are either for Christ, or against Him (Matthew 12:30). What the cities of Dallas and Jay have really done is replaced a Christian symbol with atheism. Sadly, we are seeing more and more of this as groups like the Freedom from Religion Foundation fight to have any mention of Christianity—a very important influence in the foundation of America—removed from the culture and replaced with their own humanistic/atheistic religion..

It’s ironic that FFRF’s Co-President refers to the town council as “‘wise men’ and women” for removing a Christian symbol. Romans 1 tells us that those who refuse to acknowledge God are actually foolish: “Professing to be wise, they became fools” (Romans 1:22). Sadly, our culture is increasingly refusing to acknowledge God and His Word.

Interestingly, in my homeland of Australia, which does not have a Christian heritage and has a much smaller percentage of Christians than the US, there are Nativity scenes and Christmas carols being played in many of the malls and other large shopping centers. But in America—a country largely founded on Christian principles—these things are increasingly disappearing from public places. Here is a photo of one of these Nativities that I took during a recent trip to Australia. 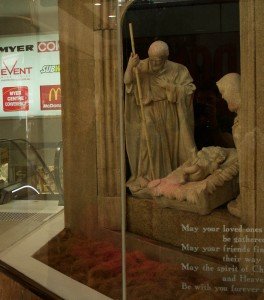 It seems there is more tolerance of different beliefs at Christmastime in Australia  than in the US. Sadly in America, a small minority (made up mainly of aggressive atheists) has been allowed to impose its naturalistic worldview on the culture.

As secularists increasingly attack Christianity, I encourage you to be bold in standing up for the faith and proclaiming the truth of God’s Word and the gospel. During the Christmas season many people are more open to hearing about Christ and what He did for us, so I encourage you to use this time to tell others about the message of salvation, beginning in Genesis (chapter 3).