The life-size Noah’s Ark project under construction in Williamstown, Kentucky, will no doubt be a major economic boost for Grant County and the rest of Northern Kentucky—as well as the entire state of Kentucky.

The new research Answers in Genesis commissioned earlier this year raised estimates of Ark attendance up to a potential 2.2 million visitors a year. This research was only conducted among the US population—there will, of course, be thousands of visitors from other countries (as we have already seen at our Creation Museum).

Based on the number of people surveyed who said they would purchase combination tickets to the Ark and Creation Museum, the researchers also estimated that attendance at the Creation Museum would more than double from the current 300,000 a year to a possible 700,000 a year.

Some secularists have claimed (offering their opinions based on no data) that the Ark Encounter’s attendance will suffer because it is being built and is owned by a Christian organization. But our research shows that people, including non-Christians, want to bring their children to family-friendly facilities, like the Ark Encounter. So we expect that both Christian and non-Christian families will visit in large numbers.

Most people who visit the Creation Museum travel more than 250 miles to get here and stay at least one night (many stay two or more) in an area hotel. You can see evidence of this in the video below.

This phenomenon will certainly be true of the Ark Encounter, and perhaps even more so. In addition, the Ark Encounter will generate numerous jobs—most in the local community outside the Ark facility—and experts calculate the rise in job numbers from such an attraction will eventually be in the thousands.

Along with the economic impact, I truly believe this Ark theme park will have an incredible spiritual impact. Just like at the Creation Museum, people will be challenged concerning the truth of God’s Word and the gospel. Even many non-Christians over the years have expressed their thanks to Answers in Genesis for the tasteful way God’s Word and the gospel are presented at the Creation Museum. Many museum guests have even thanked Answers in Genesis for being so upfront about the message we are sharing. We certainly do not hide the fact that AiG is an evangelistic organization, presenting the message that the history recorded in the Bible is true, and that the gospel based in that history is true.

The Ark is going to have a very different feel from the Creation Museum. First of all, the building in and of itself will be a huge tourist attraction. This massive wooden structure will be the biggest timber frame building in America, and we understand the Ark will be the biggest timber frame building in the world. Then as guests walk through the Ark, they will be astounded by the exhibits, which will give visitors a feel for what it was like on the Ark—as well as what it may have been like for people living in Noah’s day. In so many ways, the Ark will be a very different experience from that of walking through the Creation Museum—yet with the same level of professionalism with its first-class exhibits. This is why we also believe many people will visit both facilities.

The life-size Ark is just phase one of a massive complex that has been planned for the Ark Encounter. Once the actual Ark is opened, we will begin construction on the next phase—and other phases for many years to come.

Here are some photographs taken this past Saturday to show you the progress being made on this massive undertaking, to open sometime in 2016 (date will be announced later this year once construction schedules are more firm). You can also read an explanation of the nature of this building project (e.g., the purpose of the concrete towers, the building codes that must be followed, and so on).

A view of the construction site showing the three towers that will house restrooms, stairs, and elevators, and that will anchor the Ark structure—elements expected of a major tourist facility. The construction of the piers for the bow and stern sections will begin this week.

I have included a photograph taken a few weeks ago showing the outline of the Ark imposed on the structure, so you get more of an understanding of its size and what it will look like. 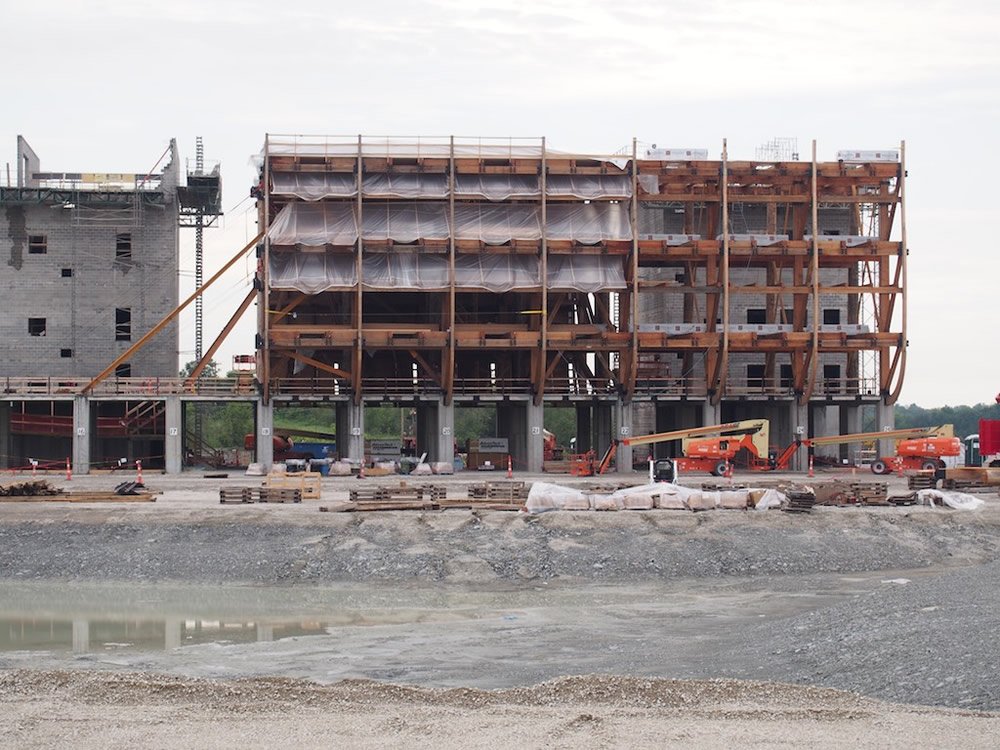 A close-up of the timber frame structure that has already been put together—the roof will add more height to this structure. It will be completed in sections, so work on the fire sprinklers, electrical aspects, and exhibits can also begin while other sections are under construction. I’m sure Noah didn’t need to install fire sprinklers! 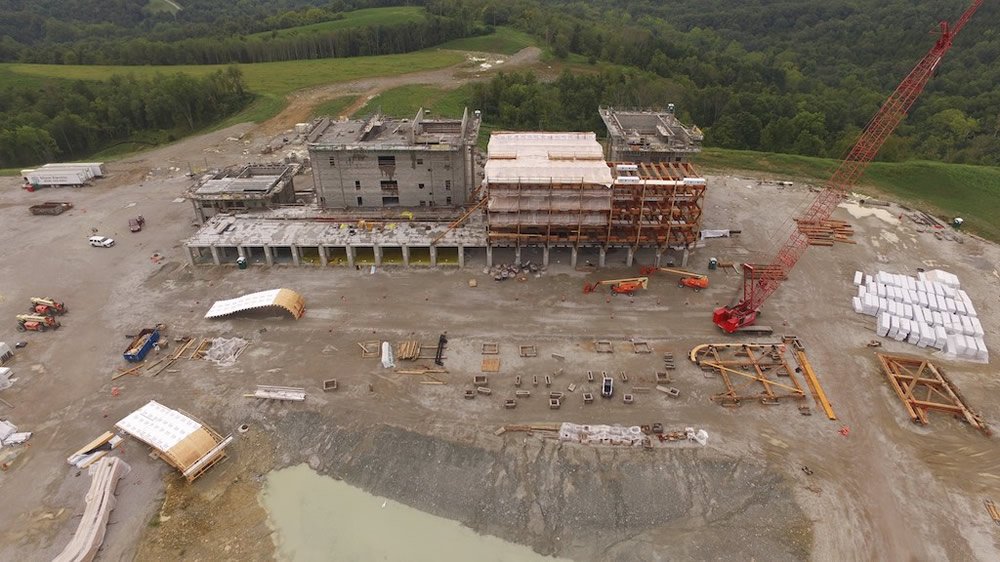 A photograph of the construction taken using a drone. The bow will extend to approximately where the white vehicle can be seen on the left, and the stern will extend to about where the timber is stored on the ground on the right. 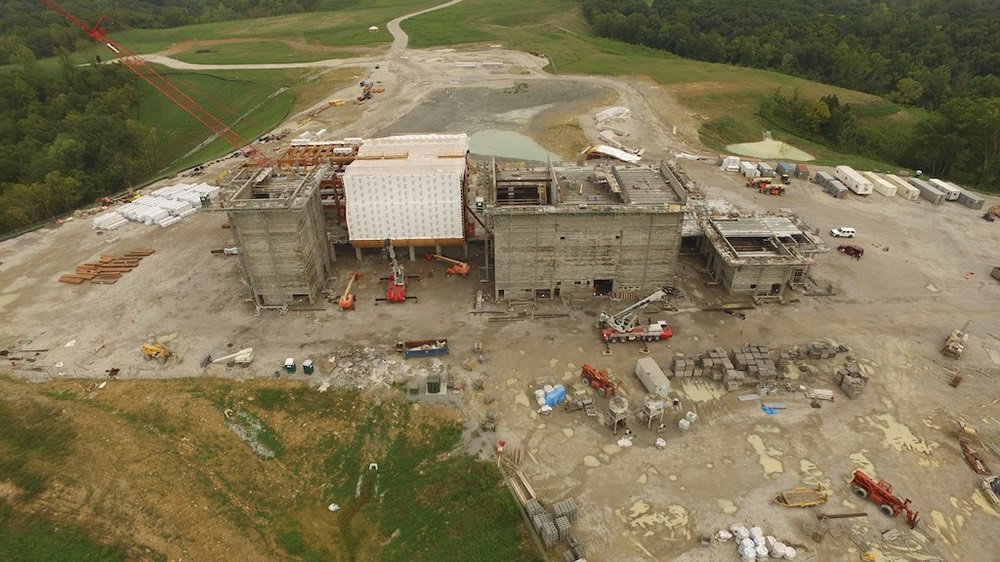 A picture taken from the back using the drone—you can see some of the siding that has been placed on the outside of the wooden structure. There will be a ramp constructed in the space between the tower on the left and the middle tower, which will take people into the Ark onto the first deck. 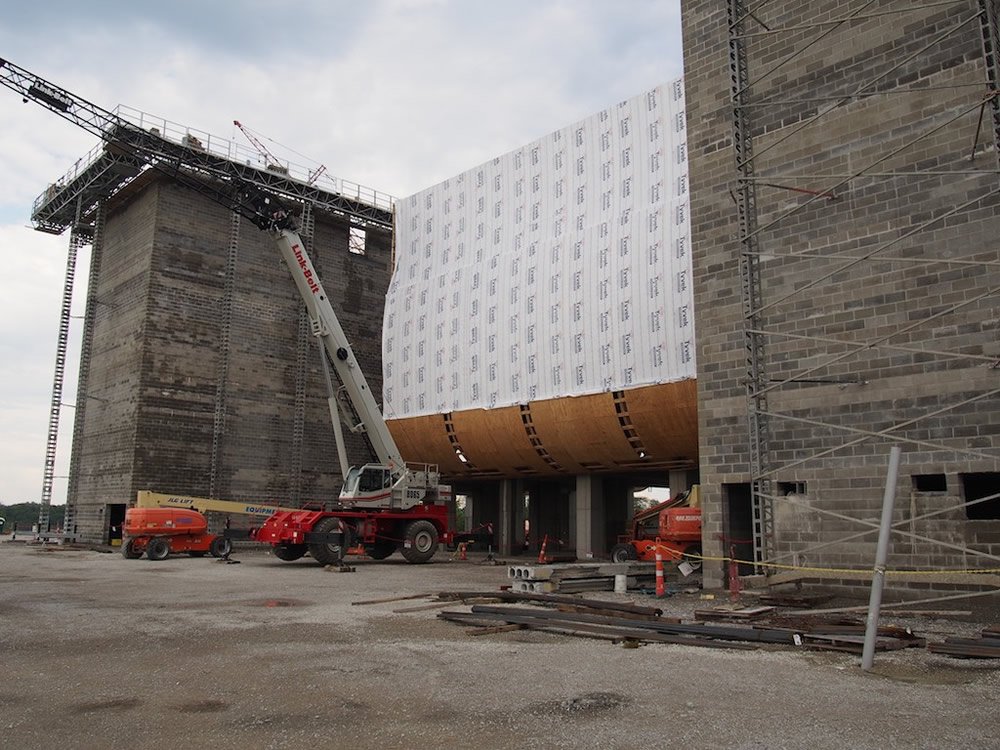 A close-up photograph from the back side showing the space where the ramp will be constructed. 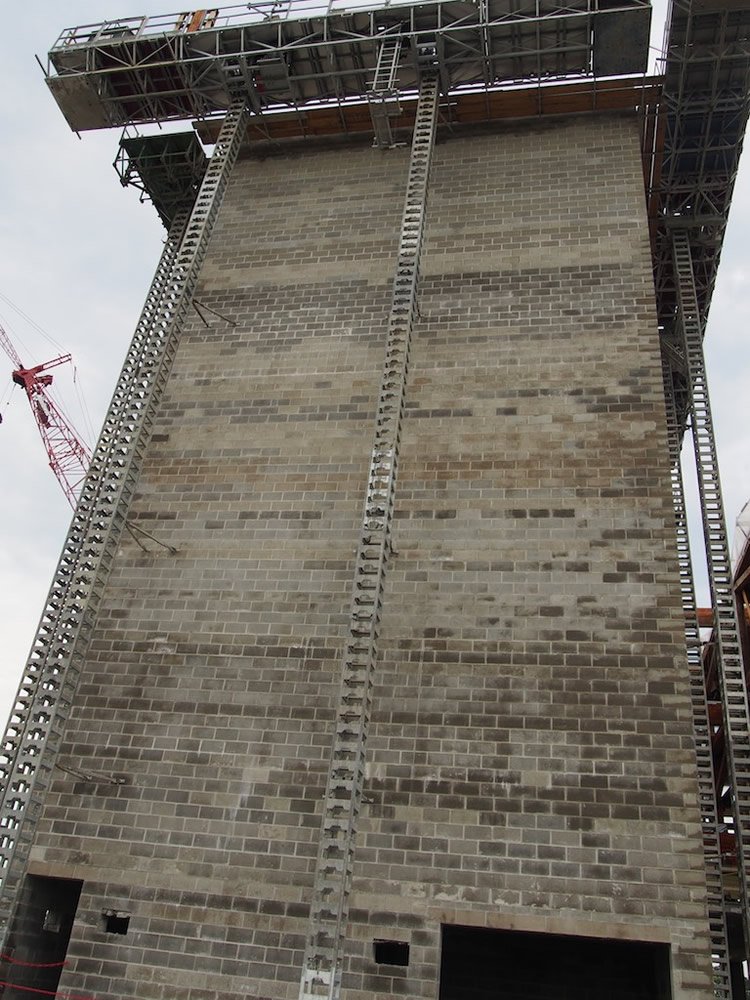 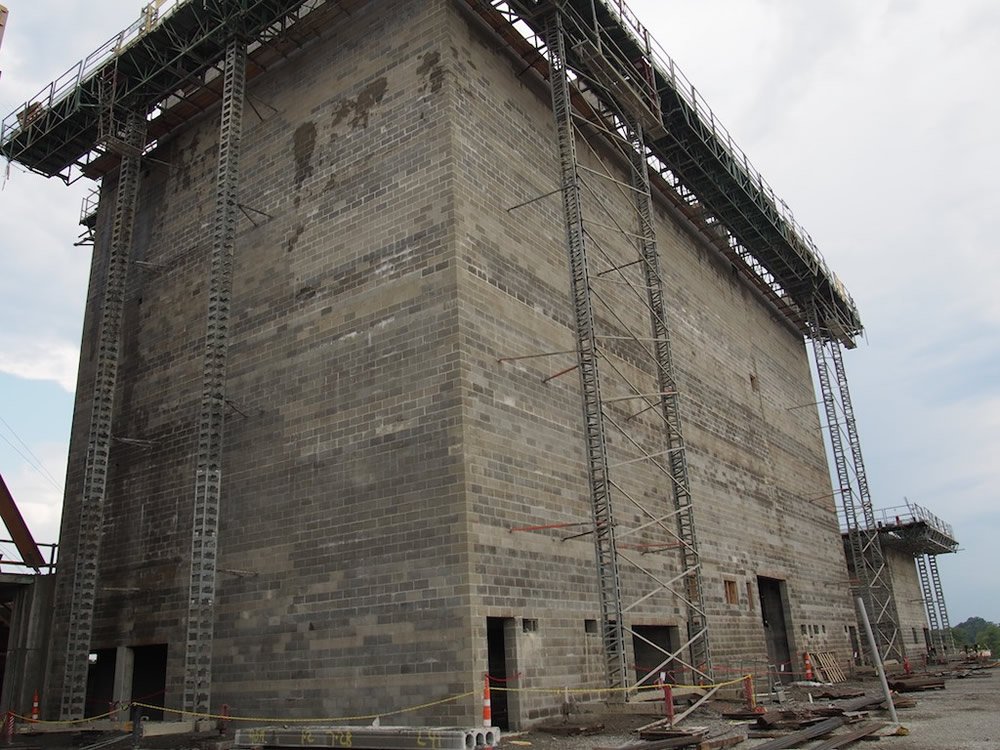 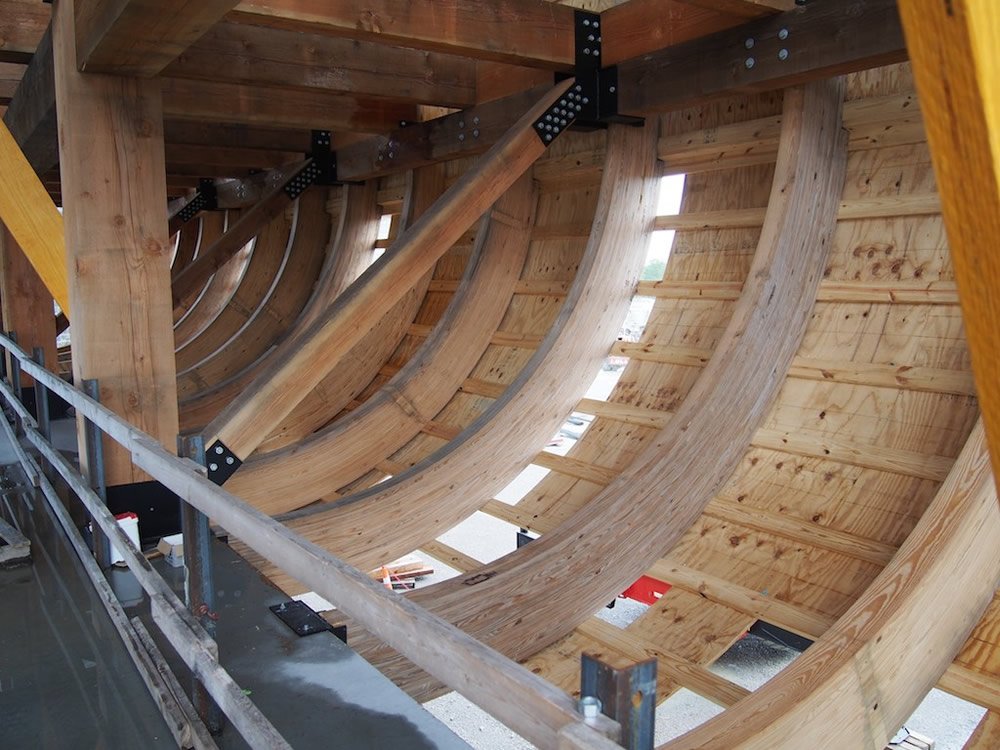 A photograph to give you just a little feel of the inside of the Ark (much more has yet to be done, of course). 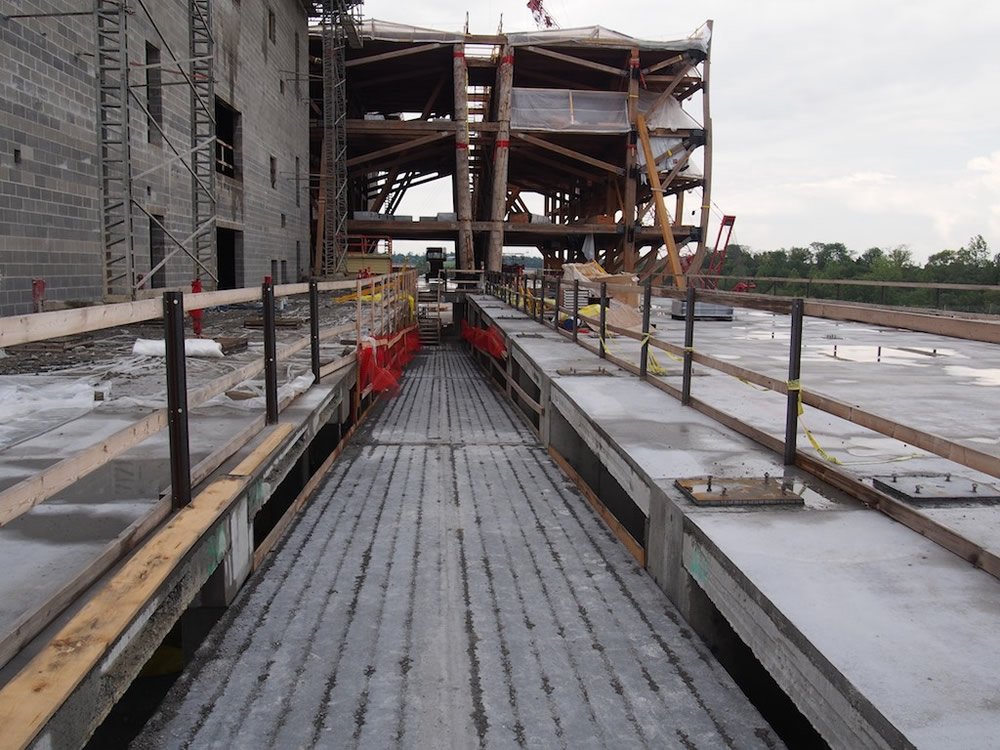 The exit ramp of the first deck that leads underneath the Ark to the gift store. 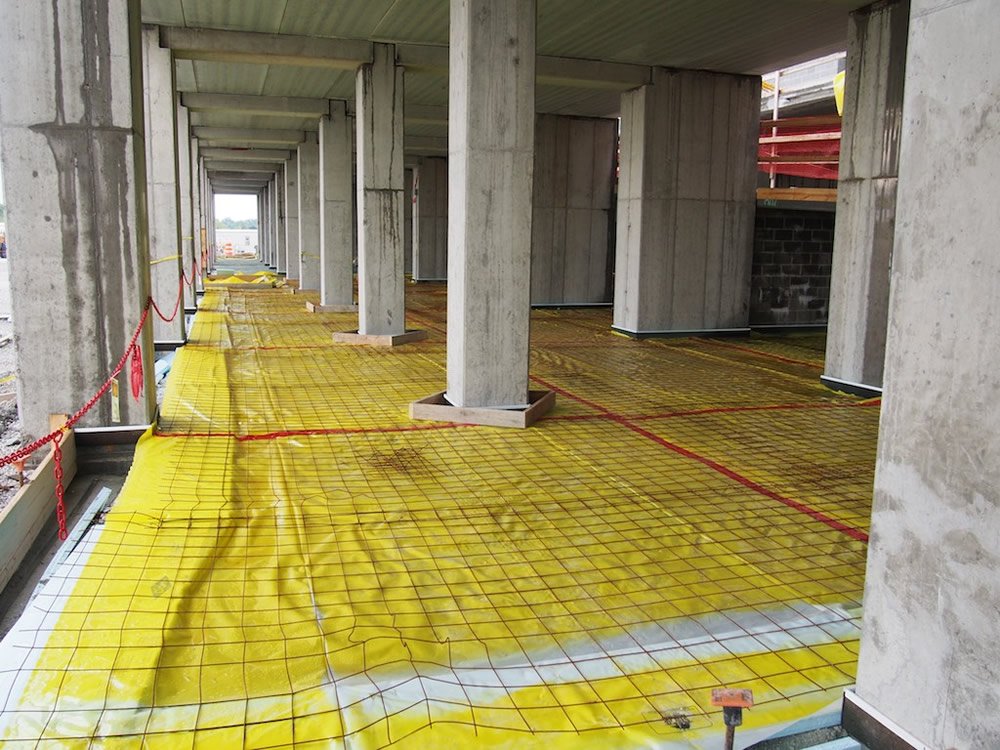 Workers are preparing to pour the floor for what will be the gift/bookstore as people are about to exit the Ark. 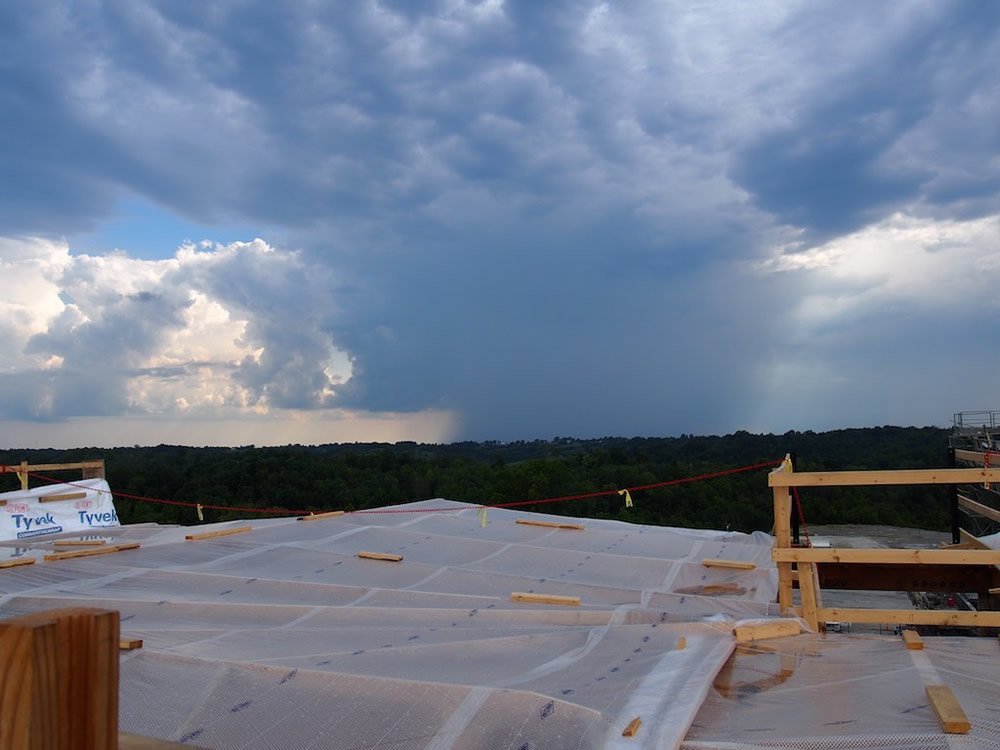 I took this picture of a storm from the roof deck. The roof deck will house a restaurant that will have an incredible view of the countryside. 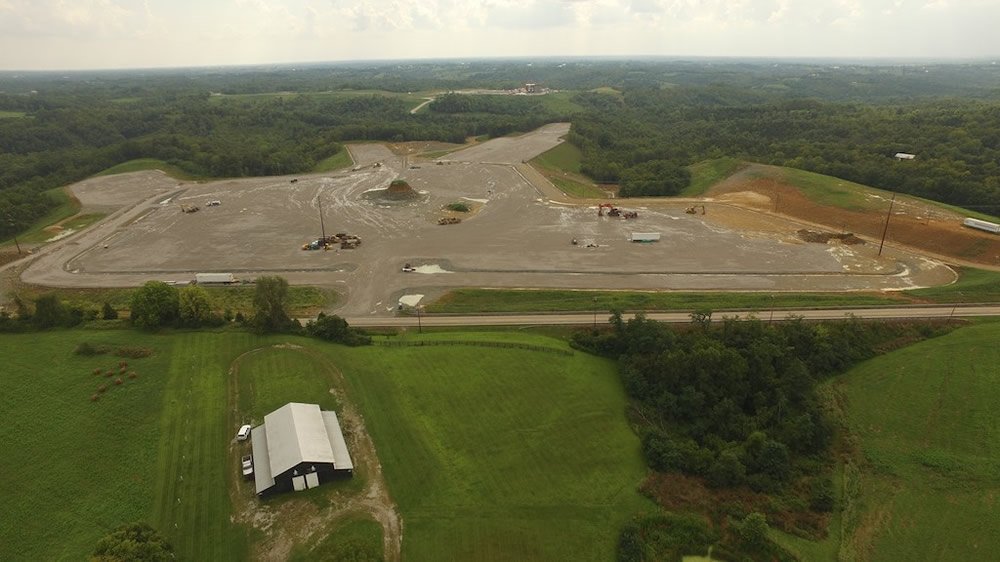 You can see the 4,000-space parking area is well advanced. 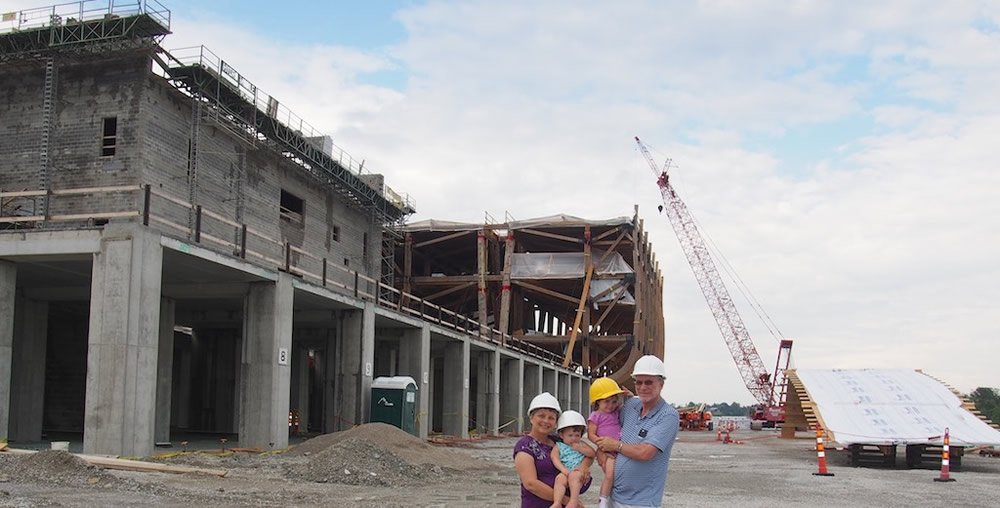 My wife and I are holding two of our granddaughters in front of the Ark construction site.

Thanks for praying for what we believe will be one of the greatest Christian outreaches of our day—and it will be a family friendly facility the state of Kentucky can be proud of.

Thanks for stopping by and thanks for praying,
Ken Ham

Previous Article What Is the Greatest Investment You Can Make? Next Article Partnering with a Creationist University