Are you equipped to answer skeptical questions about the biblical Exodus, especially now with the recent Christian Bale film on Moses and the Exodus being on many people's minds? Most scholars and archaeologists today will tell you that there is no evidence for the Exodus of Moses and the Israelites from Egypt, but is this really so? What if they’ve simply been looking in the wrong place and time? An engaging new documentary, Patterns of Evidence: Exodus, seeks to wrestle with and answer these questions. This gripping film, shot on location in places like Egypt and Israel, is filled with useful apologetics information.

This documentary—which was 12 years in the making!—is being released at the perfect time, just a few weeks after the theatrical release of Bale's Exodus: Gods and Kings (you can read our review of that movie here). Instead of treating the biblical account of the Exodus as a literary piece of fiction, this new documentary explores Egyptian archaeology to discover evidence for the event. You will see how archaeology even confirms the biblical account of Joseph, the multiplication and enslavement of the Israelite people, the plagues on Egypt, the Exodus out of Egypt, and the conquest of Canaan. Despite the claims of skeptical scholars, the evidence is out there if you look in the right place and time! You can watch the official trailer below.

We had AiG staff review the documentary, and they like the film because it clearly highlights how your starting assumptions determine how you will view and interpret the scientific evidence—something we point out constantly on our website! Some of the scholars and archaeologists in the film who rejected both biblical history and a biblical timeline could not see the overwhelming evidence for the biblical account of the Exodus even when it was right in front of them because they started from the wrong starting point. Your starting point determines how you interpret the evidence!

Toward the end of the film, the ideas of presuppositions and your interpretation of the evidence are summed up in a discussion of revised Egyptian chronology:

There is mounting evidence that the current reconstruction of Egyptian history has major problems that have nothing to do with the Bible. What might Egypt’s history look like if the dark periods were adjusted in a way that some scholars believe the evidence demands?

What’s not changing is the Bible timeline because that’s not affected by [Egyptian chronology]. If you’re changing the Egyptian timeline you’re moving it against the Bible timeline. So all of a sudden things that were not in the right time period between the two are suddenly lining up in a different way. And that’s the exciting bit! [Because] that’s where we suddenly see evidence of the biblical story.

It’s startling to think how significant this could be because chronology, the dates assigned to these events, is the thing being used to convince the world that the Bible is just a fairy tale. But look at the pattern! Evidence matching Joseph and the early Israelites’ arrival in Egypt, their tremendous multiplication, their descent into slavery, the judgment and collapse of Egypt, the deliverance and Exodus of the Semitic population, and, finally, in Canaan, evidence matching the conquest of the Promised Land. I know there’s a lot of disagreement over the dating but what strikes me is that if you put all the dates to the side for a moment what emerges from the archaeology is this pattern that matches the Bible every step of the way and doesn’t that deserve to be taken seriously? But for now, those who hold to established conventions will not allow these connections to be made. 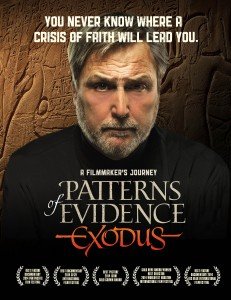 I really encourage you to go see this superb film in theaters as it releases on Monday, January 19. It is a one-day-only event, so be sure to mark your calendars. In addition to the documentary, the theatrical showing of this film includes a 30-minute exclusive pre-show as well as a panel discussion following the showing. This post-film discussion includes two secular and two Christian commentators shedding light on the Exodus debate.

We will be releasing a full-length review of the movie on Saturday, so be sure to keep your eyes open for that on AnswersInGenesis.org.

Patterns of Evidence: Exodus is premiering in 650 theatres across the United States on Monday, January 19. To find the showing nearest you, simply click the "buy tickets" button and enter your zip code here. You can learn more about this film, view a trailer, and purchase tickets by visiting PatternsOfEvidence.com. I encourage you to take your skeptical and believing friends, youth group, or homeschool group to go see this excellent, thought-provoking film. You will be encouraged to stand firm in the faith and will be equipped to answer skeptical questions about the Israelite Exodus.

Update: The filmmakers will present an additional movie screening of the documentary on January 29, 2015.