I expect that an anti-biblical American TV series will soon be used in public schools across the country, and I want parents to be prepared to counter the series' evolutionary arguments from a biblical standpoint.

Early this year, the 13-episode TV miniseries Cosmos: A SpaceTime Odyssey, hosted by astrophysicist Neil deGrasse Tyson, aired in the United States. This series was marketed as an effort to encourage scientific literacy, but most of its time was spent presenting an atheistic, anti-biblical belief system. As this series will no doubt be used in many science classes, the evolutionary indoctrination will be felt for decades. As each episode aired, AiG wrote a review and a companion discussion/study guide to encourage people to think biblically, discern real observational science from secular evolutionary interpretation interwoven with it, and to debunk the aggressive evolutionary content.

Our newest resource, Questioning Cosmos: A Guide to Great Discussions, is a collection of these study guides into one volume. The AiG graphics department and publications team did a great job designing Questioning Cosmos. Its full-color glossy pages are packed with illustrations, questions for discussion, and detailed answers and explanations to help parents, teachers, and youth group leaders teach young people (and adults!) how to discern what observational science is presented in the Cosmos series and what material is best described as an evolutionary infomercial.  As you can see in the attached photograph, its author Dr. Elizabeth Mitchell, was very pleased when her husband, Answers in Genesis speaker Dr. Tommy Mitchell, surprised her by presenting her with the first copy of her new book. 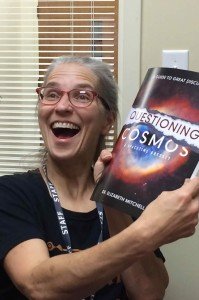 We live in a day and age where many doubt the authority and accuracy of the Bible, and secularists are becoming increasingly vocal and aggressive in pushing evolutionary agendas. The words of Romans 1 are quickly coming to life, “For since the creation of the world His invisible attributes are clearly seen, being understood by the things that are made, even His eternal power and Godhead, so that they are without excuse, because, although they knew God, they did not glorify Him as God, nor were thankful, but became futile in their thoughts, and their foolish hearts were darkened. Professing to be wise, they became fools, and changed the glory of the incorruptible God into an image made like corruptible man—and birds and four-footed animals and creeping things . . . who exchanged the truth of God for the lie, and worshiped and served the creature rather than the Creator, who is blessed forever. Amen.”

People like Tyson have exchanged the worship of the true God for the worship of what He has made. During the Cosmos program Tyson made this comment, “Our ancestors worshipped the Sun. They were far from foolish. It makes good sense to revere the Sun and stars, because we are their children.” And famed atheist Lawrence Krauss has also made similar statements, such as: “You are all stardust. You couldn’t be here if stars hadn’t exploded . . . So, forget Jesus. The stars died so that you could be here today.” 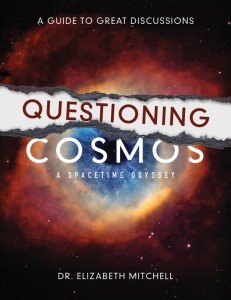 Atheists like Tyson and Krauss are aggressively trying to teach our children that they are just accidents, that there is no God, and that the creation is worthy of our reverence and worship. As this anti-God TV series makes its way into public schools, kids are being indoctrinated into a religion of pantheism—worshipping nature. It is now more important than ever that the church stands and unashamedly declares the truth of God’s Word to a dying culture. And we need to get this truth into the hands of our young people! Many youth will be exposed to this anti-God series, but we can equip them with answers to counter these claims. You will find this guide a huge help in distinguishing the wonders of observational science from the evolutionary propaganda that show host Neil deGrasse Tyson so slickly presents.

Five of the Cosmos discussion guides are available to download here or you can order a beautifully bound, printed copy of this valuable resource at our webstore or pick one up when you visit the Dragon Hall Bookstore at the Creation Museum.