Creation Museum member Bob Worstell shared something interesting with us recently. About 55 years ago, he subscribed to the magazine Popular Science but soon stopped. A few weeks ago, Bob thought he would subscribe again to Popular Science, and he received a trial issue. The first copy he got in the mail, 55 years later, was one with Bill Nye “the Science Guy” on the cover. In a long—and sometimes combative—article (note the cover’s depiction), Nye discussed his debate with me last February. The debate became something of a national event, with a conservatively estimated 15 million people having watched it (live or recorded).

Bob indicated that he did not recall a lot of secular, evolutionary humanistic content in the magazine back in 1960 (though there was some, he acknowledged). Based on his reading of the current issue of Popular Science, Bob’s belief is that the editors are much more intentional today about promoting evolution and “popular”izing it. Here is a photo of Bob holding up his recently received magazine, with Bill Nye “the Fighter Guy” on the cover: 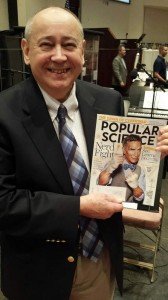 Watch the Nye debate and read a detailed rebuttal of the many points Bill Nye brought up during the debate.

You can also read the first of a series of articles detailing how Popular Science is siding with Mr. Nye and his materialistic religion.