Now, I mean “groupies” in the nicest way!

I’m thrilled to be seeing so many groups visiting the Creation Museum over the past several weeks—including families with many children and teens. Now, while most visitors who come to the museum are here with their families, there are many groups that visit from churches, organizations, clubs, and sometimes through unique means.

I have written before about Ellen Bauer, who lives in Iowa, who has brought nine groups from her region to the Creation Museum. Last year, she hosted three different groups on buses–about a 10-hour drive away. Last week, Ellen was here again—along with her husband Roger—and brought 62 people to the museum (mostly from her home state, but also some visitors from nearby Minnesota).

For volunteers Ellen and Roger, promoting their tours and getting them organized has been a big ministry for them. It will typically take them five or six months to put a trip together. They have such a passion to introduce people to the biblical messages at the museum (including the gospel), and it has become a “labor of love” for them.

Here is a photo of Ellen and me taken outside our auditorium (called Legacy Hall) just after I spoke to several hundred people. 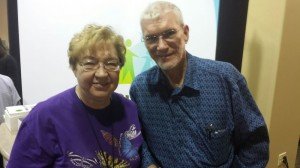 Even though traditional bus tours of tourist attractions in the Midwest have tailed off (I hear that it is mostly due to the high price of gasoline, and thus renting buses can get expensive),  people like Ellen are making sure the trips they organize will be offered at the lowest cost possible. Because of this, she has brought about 350 people to the Creation Museum from Iowa and its neighboring states.

Thank you, Ellen and Roger!

To learn more about how to organize a group tour and the discounts you can receive, go to groups page on the Creation Museum website.