Last night, Answers in Genesis, in a live web streaming event from the Creation Museum, announced that funding was in place to begin construction of the full-scale Noah’s Ark in what is called the “Ark Encounter” historical theme park in northern Kentucky.

I encourage you to watch the video of last night’s exciting announcement—which also reveals how certain reporters and atheists have misrepresented, distorted, and told outright untruths in their attempts to hurt the Ark project. You may be shocked at the lengths certain people have gone to in their efforts to stop this project because we are a Christian organization. I will provide the link to the video below. 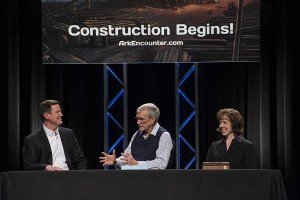 Here I am talking to Joe Boone, our VP of Advancement, as Dr. Georgia Purdom looks on. The three of us announced the successful closing of the Ark bond.

Some bloggers are trying to claim that my recent debate with Bill Nye “the Science Guy” is what brought in the necessary bond amounts. Actually, that’s not true at all. The registration for bonds had already closed for people wanting to purchase them before the Nye debate. No new bond registrations could have occurred after the debate.

An Associated Press reporter, in an article distributed after the live streaming event that I described as an “online press conference,” stated the following:

And here is a quote from another report, this one by ABC:

Nye said he was “heartbroken and sickened for the Commonwealth of Kentucky” after learning that the project would move forward. He said the ark would eventually draw more attention to the beliefs of Ham’s ministry, which preaches that the Bible’s creation story is a true account, and as a result, “voters and taxpayers in Kentucky will eventually see that this is not in their best interest.”

So, Bill Nye apparently does not care whether the economy of Kentucky is helped by millions and millions of tourism dollars flowing into the state—plus seeing the creation of thousands of new jobs at the Ark Encounter and in the region (in hotels, restaurants, and other businesses in the area.) It is sad that Mr. Nye would rather have thousands of people go without jobs and see economic growth halted in the region (and the state as a whole) because as one who rejects God and His Word, he is intolerant of Christians! He wants us to “go out of business.” Yes, very sad.

In the video, you will watch leaders of the community where the Ark Encounter project will be built (Grant County, south of Cincinnati) who are thankful for the economic boost this project will bring to the area.

I have a message for Bill Nye: “You can’t stop something God is doing!”

As I read Bill Nye’s reaction to the announcement that construction is beginning on the Ark Encounter project, I thought of this verse of Scripture: “And now I say to you, keep away from these men and let them alone; for if this plan or this work is of men, it will come to nothing; but if it is of God, you cannot overthrow it—lest you even be found to fight against God” (Acts 5:38–39).

So, as I said at the end of the live streaming event, “Let’s build the Ark!”

Lisa, who watched the live streaming event, wrote to Joe Boone of our staff just a few minutes after the online press conference and had these wonderful words of encouragement:

Wow – that was top notch! Loved so much about the live-stream, but I think it was especially poignant how you all addressed how the media has been misconstruing and outright telling mistruths about the project. Your “NO” responses were classic and were quite the perfect response for each question. (Less is sometimes so much more …)

I don’t think I can properly express how happy I am for you, AiG, our nation, and the world for that matter!  Honestly, I feel like the Ark is a new beacon of hope to our ailing society and I am so excited to see that the funding hurdle has been overcome and the Ark is moving forward.  I can only imagine the joy and enthusiasm that is being experienced by you all!

Congratulations!  God bless you and thank you for your efforts! You are amazing and incredible!

—Lisa I wonder if Bill Nye would take a phone call from our friend Lisa!

Watch the video of our online press conference at ArkEncounter.com. You can also read our press release about the announcement that we will begin construction of the Ark Encounter.

And here are some photos of Thursday evening’s thrilling announcement: 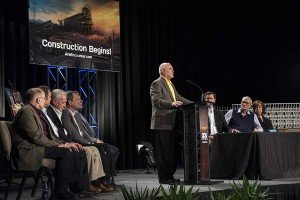 Mike Zovath, who will lead the day-to-day effort to build the Ark Encounter, spoke at the online press conference. 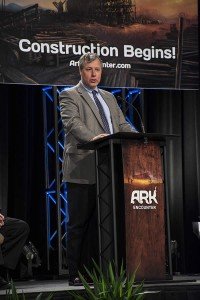 Darrell Link, the Judge Executive of Grant Country where the Ark will be built, shared his excitement last night about how the project will help his county. 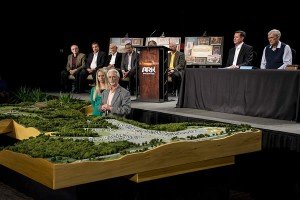 Patrick Marsh, lead designer for the Ark Encounter, and designer Kristen Andersen showed the scale model of the Ark property. 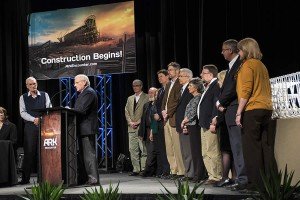 Don Landis, chairman of the AiG board, spoke as the rest of the board listened behind him. 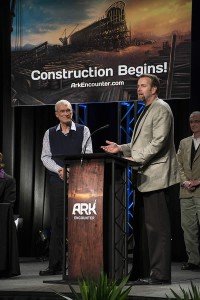 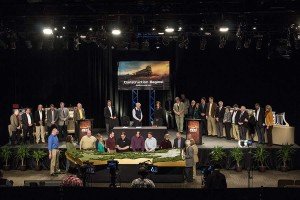 The online press conference concluded with many AiG staff, board members, and guests gathering on the stage or near the Ark model inside the Creation Museum’s Legacy Hall.

Previous Article Where Was Waldo the Coati? Next Article “Answers for Women” Conference—Early-Bird Discount Ends Monday!