During my recent debate with Bill Nye “the Science Guy” at the Creation Museum, Mr. Nye made a few errors and misrepresentations. The day after the debate, Dr. Georgia Purdom and I shared some of them on a live web stream (archived at debatelive.org/answers/) and AiG posted a rebuttal of virtually every one of Nye’s claims.

Mr. Nye made a false claim about our state of Kentucky and its medical technology. It caught the eye of a diagnostic radiologist, who wrote a letter to Bill Nye to correct him. The doctor has given us permission to publish it.  Here is the letter in full—without comment—as the radiologist counters Nye’s false charge that the state of Kentucky does not have a nuclear medicine program within its borders. Apparently it was Nye’s attempt to show that the Creation Museum’s home state is backward technologically, and that the museum has supposedly been contributing to scientific illiteracy in Kentucky.

Subject: Incorrect information regarding Nuclear Medicine in your debate with Ham

I thank you for your time and effort in participating in the debate with Ken Ham. I am a Bible-believing Christian and a physician--- a diagnostic radiologist, in fact.  I graduated from MIT with a degree of biology, and went on to New York University for my medical school.  I was not a believer of Christ then, but I am a believer now.  I also firmly believe that good science can be done by theists and especially Christians and Jews who hold to Biblical beliefs.  In fact, a lot of the foundations of modern science was laid by believers, who believed in the Almighty God who created the universe that has knowable laws and principles which can be discovered by experimentation and observation.

As a radiologist, who use nuclear medicine technology and science in general on a daily basis, one little factoid that you mentioned in your debate caught my attention.  In the YouTube video, around 1:25:00 time mark:

you discuss the application of Rubidium in myocardial perfusion imaging.  You describe the "bad old days" when doctors "right away cut you open". You then say, "now we use a drug based on Rubidium to look inside your heart without cutting you open."

Now, I am relatively young in my career, so I cannot speak intelligently of those "bad old days" that you're talking about, but I would think that cardiac surgeons probably used some sort of diagnostic imaging (such as coronary angiography) to get information before putting the patient up for surgery with cardiac bypass.  In fact, the parallel development of catheter coronary angiography (which only requires a femoral artery arterial puncture, far from cutting anybody open) and open heart surgery during the 1950's and onward is a natural progression of two interrelated disciplines in medicine.

I do want to address your "NOW [emphasis mine] we use a drug based on Rubidium" comment.  Myocardial perfusion imaging (which is what you're referring to) in nuclear medicine has a fairly long history.  In fact, using radioisotopes for medical application existed since the 1950's (the Society of Nuclear Medicine was established in 1954), and radiopharmaceuticals for myocardial perfusion imaging existed and widely used since the 1980's.  So characterizing this technology as "now" would be somewhat misleading and demonstrates your ignorance of the field.

I also wanted to address your comments regarding nuclear medicine technology schools in Kentucky.  You state: "Right now, there is no place in the Commonwealth of Kentucky to get a degree in this kind of nuclear medicine". And you have on your slide a screen capture from a website that reads: "Colleges Offering a Major in Nuclear Medical Technology/Technologist" with the words in red: "Unfortunately, we were unable to find any undergraduate programs in Kentucky for this major."

Unfortunately, you may have used the wrong website or a website that has incomplete or incorrect information.  You could have used the website of the Nuclear Medicine Technology Certification Board, the governing body for certifying individuals to be a nuclear medicine technologist. In their list of accredited schools for nuclear medicine technologists, Kentucky has two: one in Louisville at Jefferson Community College, and the other in Lexington at Bluegrass Community & Technical College.

I include the link to the NMTCB website for your reference:

If you go further down the list for the State of Washington (where Nye Labs LLC is located, as per your Contact Bill Nye webpage), there is only one, at Bellevue College in Bellevue, WA.  So, by your argument (of using the number of nuclear medicine technology schools as a reflection of that state's scientific sophistication), in light of this data, perhaps you should be worried that your state of Washington is a bit behind Kentucky in technological and scientific sophistication, and I hope that you find that "troubling" and hope you're "concerned" about that.  By your argument, Kentucky is twice as scientifically literate as Washington.  And I am proud to announce that my home State of Iowa, having THREE (at Des Moines, Waterloo, and Iowa City) accredited schools in the state, equals in terms of scientific literacy and sophistication to Kentucky and Washington, combined.

Perhaps you owe an apology to the citizens of Kentucky in the live and Internet audience regarding your comment about their state.

I don't know if you'll debate another Creationist again, but if you do, please check this information yourself and correct your slides and your presentation to represent facts.

Dr. P.  MD* Also, I wanted to draw your attention to today’s lead article on the web, written by Dr. David DeWitt, to refute another charge by Mr. Nye: that the creation model does not lead to the making of some specific predictions.  It’s fascinating article from a scientist who is a creationist, and it does a lot to rebut what Mr. Nye stated in Tuesday’s debate. By the way, here is a slide I showed during the debate about the predictive nature of the creationist model. 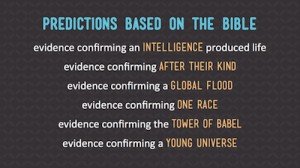 In the Dominican Republic—and Live Streamed

Tomorrow (Sunday, February 9) my message at a morning worship service in the Caribbean nation of the Dominican Republic will be streamed live at 9 AM eastern time (10 AM in the D.R.) via ibcrd.org. A live stream from another D.R. location on Monday and Tuesday can also be seen at the same link. Find out more at facebook.com/ibcrd. My talks will be translated into Spanish with the translation being in real time. Let your Spanish-speaking friends know about this outreach and encourage them to watch as many Bible-upholding sessions as they can.

*Editor’s note: The medical doctor who wrote this blog post has informed us that “the names of the two Kentucky schools mentioned above were taken from the Nuclear Medicine Technology Certification Board. The group has not updated their website, and it appears that Jefferson Community College in Louisville now has an inactive program.”

Previous Article Time Magazine—Retract Your False Statement Next Article AiG in Your Church, Group, or School—Get Answers to Children, Teens, and Adults