A Long Way from Jordan to Kentucky and the Creation Museum

Our first guest speaker of the year for an AiG chapel service was a dear friend of the AiG ministry, and someone I have also gotten to know as a personal friend. Pastor Faris Sahawneh, originally from Jordan (the country right next to Israel) wears many hats, including pastoring a church in Mayfield, Kentucky, and he is also an instructor in computer science at Mid-Continent University.

Faris was one of the people instrumental in blessing me with a special recognition two years ago, as Mid-Continent University conferred an honorary doctorate degree on me. It was a total shock when that happened, because President Imhoff didn’t inform me of the honorary doctorate until a few minutes before I was to get up in front of the students, faculty, and administrators to speak. Behind the scenes, Faris and some of the college staff made sure that the ceremony would be kept secret from me—even my wife was in on it and ensured that the robe I would wear during the ceremony would be the right fit.

A few days ago, Faris encouraged our AiG staff to make 2014 the year, not only to get into the Bible more on an individual basis (although, of course, AiG’s main goal is to proclaim the authority of the Bible from its very first verse), but also to be more disciplined about Bible memorization. It was a good reminder from Faris for all of us to dig deeper into God’s Word.

Faris also shared a little about the refugee crisis in his homeland of Jordan (he left twenty years ago). Hundreds of thousands of Syrians have escaped their nation’s civil war and have poured into neighboring countries—like Jordan to the south. Faris grew up just a few miles from where some of these refugee camps are located. He said that with this major humanitarian crisis, Christians have had an opportunity to present the gospel as well as needed supplies and food to these needy people—most of whom are Muslims.

To find out more about Mid-Continent University in western Kentucky, go to midcontinent.edu.

Here’s a photo of Faris speaking to our staff. 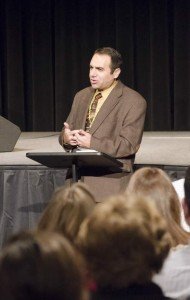 He also toured the museum once again, to see what was new—accompanied by his wife Mitzi and their three children. 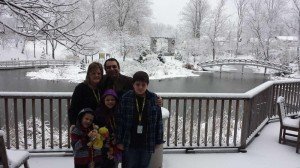 I am always encouraged to see my good friend Faris and know that this man has such a heart for God’s Word and the gospel.