On Monday, AiG President Ken Ham received his fourth honorary doctorate, this one conferred by Mid-Continent University of Mayfield, Kentucky. A doctorate in humane letters was awarded to a surprised Ken Ham at a special convocation organized by this Southern Baptist school located in western Kentucky. MCU faculty and students, plus students from a local Christian middle and high school, watched the ceremony and heard Ham give a 45-minute talk on how Christians can reach a secularized world with the gospel, followed by a Q&A session. 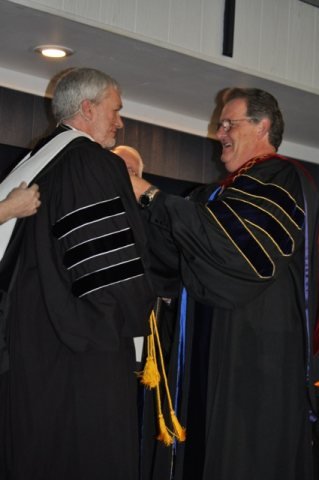 The honorary doctorate was conferred by MCU President, Robert Imhoff. 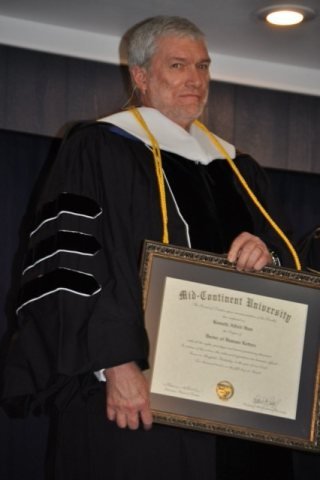 Ham arrived on campus Monday morning believing he was simply a chapel speaker for the university while in the area to conduct a seminar at HeartLand Worship Center in Paducah. Good-sized crowds came to hear Ken speak on Sunday and Monday at the HeartLand church.

Just before he received the honorary doctorate at MCU, Ken’s bio was read out-loud.

This morning’s honoree, Ken Ham, is a long way from home—and we don’t just mean 300 miles from his house near the Creation Museum in northern Kentucky. Ken moved from his homeland of Australia in 1987 to become a “missionary to America,” and in 25 years he has had a profound influence on American Christianity in getting many churches to accept the full authority and accuracy of the Bible from its very first verse.

Those who know Ken will all agree: his passion is to proclaim the accuracy and authority of the Bible and its saving gospel message.

Ken is the CEO/president and co-founder of Answers in Genesis–U.S., the highly acclaimed Creation Museum (with over 1.5 million visitors in four years), and visionary behind the future construction of a full-size Noah’s Ark. He has become one of America’s most in-demand Christian conference speakers and talk show guests. In just one year alone, he appeared on Fox’s The O’Reilly Factor and Fox and Friends in the Morning, CNN’s The Situation Room with Wolf Blitzer, ABC’s Good Morning America, BBC TV, etc.

A biblical apologist, Ken gives numerous faith-building talks each year to tens of thousands of children and adults on such topics as: the reliability of the Bible, how compromise over biblical authority has undermined society and even the church (which is seeing a massive exodus of young people), witnessing more effectively, dinosaurs, “races,” etc. 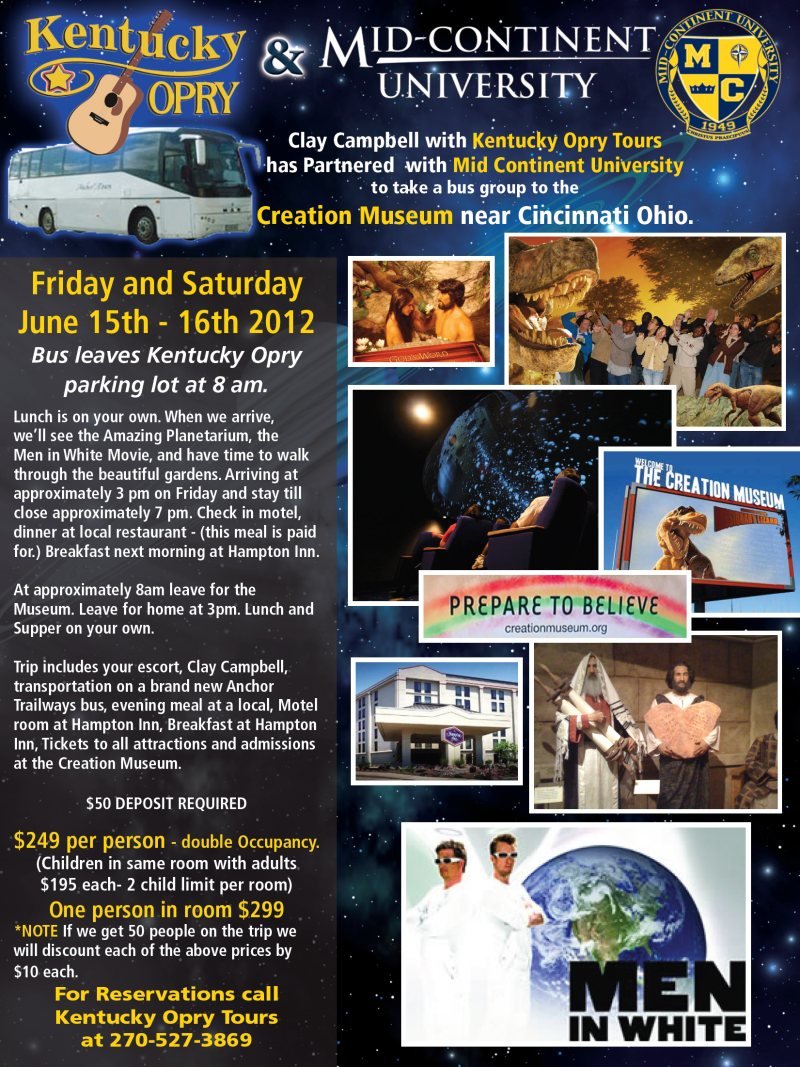 If you live in western Kentucky or neighboring states (Missouri, Arkansas, Illinois, and Tennessee), plan on joining MCU on its June tour of the Creation Museum, organized by the Kentucky Opry.

Ken Ham is the author of many books on biblical apologetics, including the eye-opening book Already Gone, co-authored by renowned researcher Britt Beemer, on why so many young people are leaving the church; the best-selling The Lie: Evolution; and a number of children’s books (Dinosaurs of Eden, D is for Dinosaur, A is for Adam, etc.). Other recent co-authored books include One Race, One Blood and How Could a Loving God …? In 2011, Ken co-authored the provocative book Already Compromised about Christian colleges and how they treat the authority of the Bible.

Ken is heard daily on the radio feature Answers … with Ken Ham (broadcast on more than 500 stations). He is the founder and contributing writer for AiG’s award-winning Answers magazine, the winner of the 2011 award for best Christian magazine (as picked by the Evangelical Press Association). He also writes articles for AiG’s popular website, www.AnswersInGenesis.org, which was picked as “Best Ministry Website” for 2012 by the 1,200-member National Religious Broadcasters.

Ken’s Australian accent, keen sense of humor, captivating anecdotes, and exceptional KeyNote/PowerPoint illustrations have made him one of North America’s most effective Christian communicators.

Ken’s bachelor’s degree in applied science (with an emphasis on environmental biology) was awarded by the Queensland Institute of Technology in Australia. He also holds a diploma of education from the University of Queensland (a graduate qualification necessary for Ken to begin his initial career as a science teacher in the public schools in Australia). Ken Ham readily acknowledges that he stands on the shoulders of apologetics giants Drs. Henry Morris and Duane Gish, whose groundbreaking research on the book of Genesis touched off the modern creationist movement around the world.

Ken and his wife, Mally, have five children and seven grandchildren, who all live nearby.

All told, in recognition of the contribution Ken has made to the church in the USA and internationally, he has now been awarded four honorary doctorates. In addition to this week’s doctorate, he has a Doctor of Divinity (1997) from Temple Baptist College in Cincinnati, Ohio, a Doctor of Literature (2004) from Liberty University in Lynchburg, Virginia, and a Doctor of Letters (2010) from Tennessee Temple University.

AiG extends its sincere thanks to Mid-Continent University for this special distinction. As Ken gratefully accepted the surprise degree, he quickly acknowledged to the audience that it was really an honor for the whole AiG ministry and its talented staff.

AiG particularly thanks university president Robert Imhoff and faculty member Faris Sahawneh for their wonderful hospitality. Find out more about their university (with locations sprinkled throughout the region, plus an online component) at www.midcontinent.edu. Our thanks also go to Pastor Nathan Joyce for hosting Ken and Dr. Terry Mortenson for a two-day conference at HeartLand Worship Center, a meeting sponsored by Mid-Continent University.