AiG Reaches Out to Bible Scholars

Just this week, my research assistant Steve Golden and AiG speaker/researcher Dr. Terry Mortenson attended the meeting of the Evangelical Theological Society (ETS). Now, this is a yearly gathering of hundreds of prominent Bible scholars and church leaders—and most of them have compromised on Genesis with views like theistic evolution, the gap theory, the day-age view, the cosmic temple view, and so on. Answers in Genesis had a booth at the conference held in Baltimore, so I asked Steve (with Dr. Mortenson) to write a report on their time at the conference. I’ve included it below.

This year at the annual meeting of the Evangelical Theological Society, Answers in Genesis once again had a booth in the exhibitor hall. Hundreds of Bible scholars, students, and other church leaders were given free AiG materials—including the pocket guides on ape-men and the best evidences for a young earth.  We pray that those who hold to old-earth and evolutionary positions on Genesis will be challenged by these materials to reconsider their views on the authority of God’s Word in Genesis.

Resources at the Answers in Genesis booth were very popular. We sold out of many resources over the three days of the conference, with many scholars purchasing copies of Coming to Grips with Genesis and Dr. Andrew Snelling’s two-volume work Earth’s Catastrophic Past. These technical works address many of the theological and scientific questions scholars have about origins and the age of the earth. It was encouraging to hear that some of these scholars are solid biblical creationists and that they are teaching from a young-earth creation perspective in their college and seminary courses. 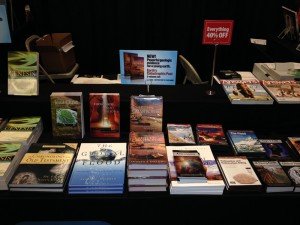 Because of the prominence of old-earth creation ministries at ETS, it was incredibly important that AiG have a presence as well. I was able to engage a number of scholars and church leaders about their views on creation. Some were old-earthers who wanted to know how biblical creationists reach their conclusions, while others were very supportive young-earth creationists who needed strengthening in their view. Overall, it was encouraging to hear just how much Answers in Genesis has impacted the faith of many Christians who have had to cope with millions of years or evolutionary ideas in the church.

Each year during the ETS meeting, Dr. Mortenson organizes a lunchtime meeting of young-earth creationist members of ETS, which he calls the ETS Creation Fellowship.  He has about 175 men on his email list, though they don’t all come to ETS, and the ones who attend this meeting are not the same each year. This time, about 25 attended the ETSCF (more than usual) to share what they are doing in their spheres of influence to teach and defend the truth of Genesis. Many of the men expressed their appreciation for Terry’s efforts to organize this meeting each year. Over the past 15 years, it has also helped to encourage these men to present papers at ETS defending the young-earth view.

Dr. Mortenson is also the co-chairman of the Creation Study Group at ETS. This is a section of four consecutive 40-minute sessions at the conference where invited papers are presented on some theme related to Genesis. It is a scholarly “debate”/discussion format with three papers representing different views (both young-earth and old-earth) on a particular theme. This year, Dr. Mortenson moderated the sessions on the topic of the role of ancient Near Eastern pagan literature in the interpretation of Genesis. Dr. Todd Beall, Old Testament professor at Capital Bible Seminary, gave a strong young-earth creationist response to the three papers presented.

Besides this, there were several other particularly good papers by young-earth creationists on subjects related to Genesis. Dr. Bill Barrick, OT professor at The Master’s Seminary, gave an excellent paper defending the existence of a literal Adam and literal Fall in response to three other papers that to a greater or lesser degree denied or doubted those truths of Genesis. Dr. Beall also gave a very insightful paper exposing the significant drift of evangelical Old Testament scholars toward liberal views of Scripture even though they still claim to believe in inerrancy. One area of drift that he discussed was on the interpretation of Genesis 1-11.

We thank the Lord for these and other gifted scholars who are standing strong for the truth of Genesis, even though most of their ETS colleagues do not. I’m always encouraged to find out about the Bible scholars who are standing firmly on the authority of God’s Word in Genesis. And we at Answers in Genesis and the Creation Museum sincerely pray that those scholars and leaders at ETS who don’t stand on the authority of Scripture (the majority of attendees) would be challenged to reconsider their views and to take God at His Word from the very first verse.