Answers in Genesis began a new web banner campaign recently to encourage people to view Comet ISON as its orbit brings it closer to earth. The campaign banner reads, “Comet ISON—Evidence of a Young Universe.”

If everything goes as most astronomers predict, the scene in the sky will be breathtaking! The comet may even be visible to the naked eye during the day. But there’s more to it than just a beautiful view. Comets like ISON are problems for evolutionists because when properly understood, they’re actually evidence that the universe is young.

How is Comet ISON evidence of a young universe? Well, we actually have an excellent answer to that question in our banner article. I’ve included a few paragraphs below:

As a sun-grazer, Comet ISON will lose a massive amount of material as it passes close to the sun. This will cause the comet to brighten tremendously, but it comes at a cost: after enough orbits Comet ISON eventually will lose so much matter that it won’t brighten anymore.

In addition to gradually wearing out, two more catastrophic loss mechanisms can ravage comets. First, as comets pass close to the major planets (especially the gas giant Jupiter), the gravity of those planets can alter comet orbits. When this happens, half the time the comet orbit decreases in size and orbital period, which causes the comet to wear out even faster. But the other half of the time comets have their orbits increased. Sometimes the increase can lead to ejection from the solar system, never to return. Astronomers have observed comet ejection a number of times. Second, comets occasionally collide with planets, thus abruptly ending their existence. We observed this for the first time in 1994 when Comet Shoemaker-Levi IX slammed into Jupiter. I encourage you to read the full article on our website so that you too will be equipped to share with your friends and family how Comet ISON is evidence that the universe is young and that ultimately the universe was created by the God of the Bible.

Our staff astronomer Dr. Danny Faulkner wrote to me yesterday saying: “After unsuccessfully trying to see Comet ISON with binoculars from my house on several mornings, I was delighted to see it this morning. It was bright enough that I thought that I ought to have seen it on previous mornings, so I thought that it must have undergone an eruption. Turns out, it did overnight, and I must have been one of the first to notice it. See this article for more information.”

A College Expo to Explore, Today and Tomorrow

Also at the museum, and as I am away speaking in Bolivia, our annual College Expo is going on through Saturday. Over 20 Christian colleges—all of which have signed our statement of faith*—have set up displays and have representatives on hand to talk to prospective college students and their parents. Over 420 students have preregistered, and we expect others to sign up at the door. Here is a photo of our exhibitors inside Legacy Hall this morning: 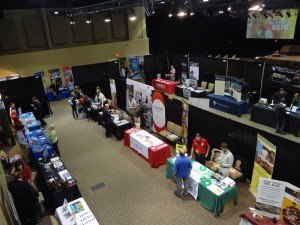 Also at the College Expo, special talks are being given by Christian educators to students and their parents. Think about attending this event—registration is free for students, and students also receive free general admission to the museum. They can hear excellent speakers like Dr. Georgia Purdom, Bryan Osborne, and the president of Appalachian Bible College, Dr. Dan Anderson. Find more information on our website.

Yesterday in Bolivia we held a news conference in an effort to promote our speaking engagements in the city of Santa Cruz. Dr. Terry Mortenson and I answered questions from media representatives from three secular TV stations and one Christian radio station in Santa Cruz. What I thought would be a short press conference lasted an hour! The reporters appeared to be very interested in the topics we will present at our creation vs. evolution conference that started later that evening. I sense a great openness here to what we have to say, so please be in prayer for the next two days of meetings. Here is a photo of the press conference—notice the conference banner behind us: 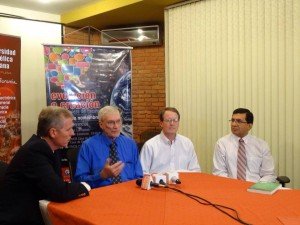 *That is not to say that every professor on each campus accepts a literal, straightforward reading of Genesis. Some investigation and discernment will be needed as parents and students seek out a school.