Yesterday I wrote about a very positive review of the Creation Museum, and also about people (Christian and non-Christian) who deliberately misrepresent the Creation Museum in their attempts to undermine its Bible-upholding teachings.

Misrepresentations of our ministry are not just limited to the Creation Museum. Here’s an incredible charge related to the “Answers” radio program I host. Someone listened to one of my programs and claimed that I had admitted that science proves evolution! But what did I really say on the program? Did I admit that science has proved evolution? Well, here is my script—judge for yourself:

Many of us would love to have the final proof that evolution is a lie—the right scientific evidence that will silence those opposed to biblical creation forever, right? Well, no.

You see, Romans chapter 1 tells us that God has revealed Himself to man in nature, so there’s no excuse for denying the witness of creation. In fact, we have solid proof in our hands that evolution is a lie: the Bible.

We can’t depend solely on our reasoning ability to convince skeptics. We present the evidence—and do the best we can—to convince people of the truth of God by always pointing them to the Bible. After all, “faith comes by hearing and hearing by the Word of God.”

Are you trusting in Jesus Christ for your faith? You see, we can’t depend “solely” on our reasoning ability to convince skeptics. Did you notice the word “solely”? Yet, based on the script above, this critic claims that I have “admitted” there is no scientific evidence to support creation! Actually, as I say time and time again, science confirms the Bible. And the creation itself is—as the verse I quoted in the script (Romans 1:20) declares—a witness or evidence of creation. Observational science is a friend of the creationists, as our staff would agree, several of whom hold earned academic doctorates.

Nobody can say that we don’t present scientific evidence. Most of all, though, we point people to the Bible. And we do believe in using reason, as one of our museum exhibits explains: 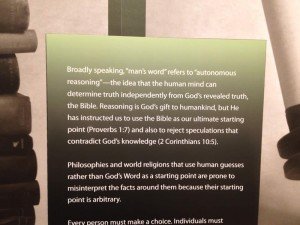 Interestingly, even one of our most vocal opponents—who is an atheist—pointed out the misrepresentations made about this radio program. Dr. PZ Myers of Minnesota, who does not like me at all and hates God, has recognized that many of his fellow secularists have misquoted me and have taken my comments out of context. He wrote on his blog a few days ago that secular bloggers have completely misread my radio statements: “What he [i.e., me] actually said is familiar creationist dogma, and comes nowhere near their interpretation. . . . It doesn’t say what they think it says. Notice the ‘solely’; creationists will claim that they are using their reason, even when they aren’t.” Later in his blog, Myers takes a shot at me, but in this rare instance, PZ’s blog has come to my defense! (I am reluctant to link to PZ’s blog because of some vile content and profanity, but some people will want to check out the “defense” for themselves at freethoughtblogs.com/pharyngula.)

If you care to, you can read some of our critic’s misrepresentations—including the one where I supposedly believe that “science proves evolution”—and then compare them to the radio script above.

I have also read a different blog post in which the teachings of another of our radio programs has been taken out of context. But think about it: if you have no absolute authority in your life and you believe that we live in in a purposeless and meaningless world, I guess you can believe it’s OK to make up things.

Well, I am thankful that skeptics are listening to the radio program. And I hope they are all going to our website and are discovering more about the Bible’s reliability—more than they can learn from just listening to a short radio spot.

Previous Article What a Contrast! Next Article “The Ecology Book”—Another Great Resource for Families!