Mourning the Loss of a Dear Friend and Colleague

Our hearts go out to the family of a great servant of the Lord, Graham Scott, who passed away on Monday. Graham was the former head of our sister ministry in the United Kingdom, AiG–UK/Europe. Frankly, there would be no AiG in the UK if it were not for his tremendous sacrifice and dedication for the creation-gospel message. Within hours of Graham’s death, I wrote to his widow, Anthea, and among other things recalled, “I will never forget the many times spent with you and Graham over many years.” 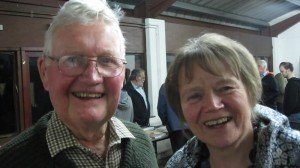 In the 1980s, I was visiting the UK at least once a year on speaking tours, along with my friend and mentor, the late Prof. John Rendle-Short. “Prof” was born in the UK but had been living in Australia. He was honored by Queen Elizabeth for his research into a form of autism. Prof and I shared a burden to reach the UK, and we realized that there needed to be a permanent presence there rather than someone travelling to the UK and holding occasional speaking tours. Prof met Graham Scott, who eventually helped us start what has now become AiG–UK/Europe. At great sacrifice, Graham and his family opened the UK office in their small rented home in Woodcroft. It was very much the “pioneering days” of AiG–UK, and it had humble beginnings.

It was an important office to establish, for many of UK’s church leaders had accepted the idea of millions of years into the Bible. This unlocked a door of compromise to question the Bible’s authority in other matters. It started in the early 1800s, and Darwin’s later ideas opened this compromise door further. The combination of millions of years and evolution contributed to the collapse of Christianity across the UK. Now there are relatively few Bible-believing churches left in a land that was once full of good churches and great Christian leaders.

Mike Zovath, one of the founders of Answers in Genesis–U.S. and a former board member of AiG–UK, recalled his dealings with Graham, who retired from full-time ministry at AiG in 1999 (and he continued to assist AiG–UK in the two years that followed):

During our first trip to the UK, Graham was fond of telling us stories about his time aboard ships working as second officer, and his time with Operation Mobilization ships in particular.

He was also an amazing historian with a penchant for British history. Through Graham’s “lessons,” Ken and I were kept well informed about the history of a particular street corner or parking lot where we’d find ourselves virtually anywhere in the UK. I know where almost every head was lopped off by an executioner throughout London thanks to his stories. And sadly, he knew where every bomb blew up in Northern Ireland during the so-called Troubles. He also knew just about every street and back alley in every town in the country. His ability to get us to the right block and the right door for our next speaking meeting was incredible. Like Ken has already said, the UK ministry would not exist without Graham’s willingness to operate on the smell of an oily rag, his tireless, sacrificial work, and his passion for the gospel of our Lord Jesus. AiG–US remains committed to assisting our sister ministry in Darwin’s homeland. In fact, our next U.S. newsletter, Answers Update (which is being printed right now) features the following article:

We have been so pleased to see how the UK ministry of Answers in Genesis has been growing. Based in Leicester (central England), AiG–UK is seeing increased speaking engagements from UK and European churches that are seeking solid biblical answers about Genesis. The attendees leave with Bible-upholding books, Answers magazines, and DVDs; and we see God’s continued blessings through their distribution.

Over the next twelve months, AiG–U.S. will be flying a number of speakers “across the pond” to hold some conferences in the UK. Steve Ham, Ken Ham, and Bodie Hodge will be touring various areas of the UK.

Later this year, we will be announcing information about a major UK Creation Conference for 2014.

In a country where there is an increasing antagonism against biblical truth, the UK needs the apologetics teaching of ministries like Answers in Genesis more than ever to give support to churches in “Darwin’s homeland.”

Please pray for the board, staff, and speakers of AiG–UK—for their strength to continue being forthright in preaching biblical authority and the gospel in the midst of heavy public criticism.

Meanwhile, AiG–U.S. is praising God for the Bible-believing Christians in the UK who are bold for the sake of Christ and His Word. My brother Steve, AiG’s outreach director who is also responsible for organizational outreach in other countries, returned Monday from a speaking tour in the UK, and also met with the staff of AiG–UK. Graham passed away just as Steve was flying back. Steve and I will continue to build on Graham’s wonderful legacy.

Pray for his widow, Anthea, and their daughter Philippa—and for the growth of Answers in Genesis–UK/Europe, which Graham dearly wanted.

Previous Article The Passing of a Wonderful Servant of God Next Article What a Contrast!