Earlier this month, I wrote a blog post about a Christian family—originally from Germany—that had been attempting to home educate their children in their homeland. The family had asked for asylum in America because of the persecution they were facing in Germany (which included fines and possible imprisonment). A judge in Tennessee granted them asylum, but the Obama Administration has challenged the asylum ruling. In Romeike v. Holder, oral arguments were heard in a U.S. Court of Appeals in Cincinnati on Tuesday about the Romeike family’s asylum request. While in the area, the Romeikes, including their six children, toured the Creation Museum on Tuesday and Wednesday.

Not only is the Obama Administration threatening to send the family back to Germany, where they may even face the loss of custody of their children, but what should also concern Americans is the possible precedent their case might set in the USA. For instance, lawyers with the U.S. Attorney General’s office implied during the oral arguments on Tuesday that the government can deny the liberty of parents to direct the educational upbringing of their children. While U.S. courts have generally been favorable to parents in regard to how they want to educate their children, including in their religious training, this current administration apparently wants to chip away at the rights that Americans currently have in home education. I blogged about this threat in a recent post.

One of the Romeike attorneys, Michael Donnelly, who is also the Director of International Relations for the Home School Legal Defense Association (HSLDA) and who has visited our museum three times himself, spoke to our AiG staff on Tuesday morning about the case, and he introduced the staff to the Romeike family. Here is a series of photos taken during the staff meeting, plus some other photos taken on site. After the oral arguments were made on Tuesday, the Romeike family returned to the Creation Museum on Wednesday to spend the entire day here and met with me and other AiG staff. 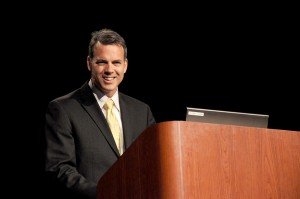 Mike Donnelly of the HSLDA spoke to our staff this Tuesday. 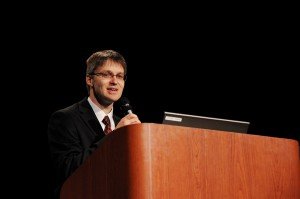 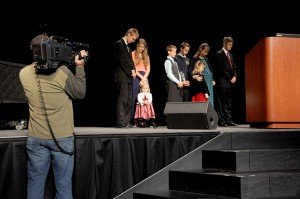 A film crew with the Truth in Action ministry filmed a part of our staff meeting. 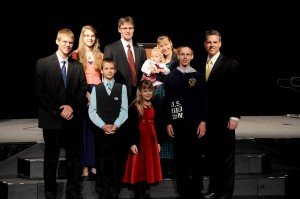 The entire Romeike family, with attorney Michel Donnelly at the far right 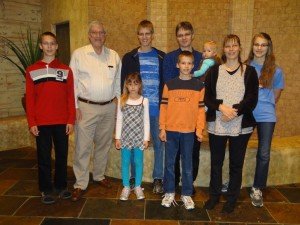 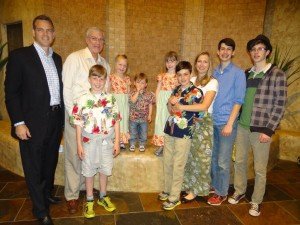 The Michael Donnelly family and me 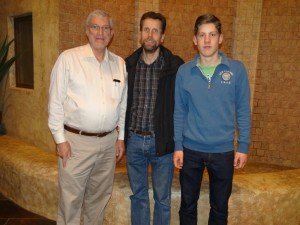 Here I am with two of the members of the Dudek family, taken inside the museum. This is another German family who has also been persecuted by German authorities for homeschooling.

Here is the compelling video that was shown to the staff on Tuesday morning by Mr. Donnelly—it will make you better informed about the importance of this case:

During a briefing for us at AiG on Wednesday about the previous day’s oral arguments in the Cincinnati courthouse, Mr. Donnelly shared with me and some of the staff that he found it “very troubling what the Obama Administration was arguing in court” regarding homeschooling. He told us that the U.S. Attorney General supported the German government’s assertion that homeschooling is not a parental right. In other words, the Obama Administration was supporting a belief that children really belong to the government, not to the parents. Therefore, governments supposedly have a right to educate children in the way they want to. This means that the current U.S. administration is seeking to undercut the parents’ ability to homeschool their children and undermine the biblical teaching that children belong to the parents and that parents are responsible for the education of their kids. In Germany, the Romeikes were forced to pay fines, and their children were removed from their home by authorities and were taken to a government-run school.

Romeike v. Holder should be a warning to all Americans that the same arguments being heard about homeschooling could be used down the road to outlaw homeschooling in the USA. At the same time, we also note that the U.S. government is increasingly pushing for new national standards in math, reading, science, etc. to be adopted in an effort to totally control the education of our children. In this curriculum move, the 50 states will not get federal financial support if they do not agree to adopt these new standards. Of course, we are seeing this new generation of national science standards insist that science should be taught as naturalism (which is atheism) and evolution presented as fact.

To keep up-to-date on this important Romeike v. Holder case, which directly affects religious liberty and education, go to the Romeike page of the HSLDA website.

Additionally, this related news story shows what it looks like when parents have no fundamental right to homeschool—at least for one family in Sweden, whose child was “removed” in 2009. The justification given by the state: homeschooling.

On Monday, our main article on the AiG website will discuss the Romeike case and its importance to education and religious freedom, not only in Germany but also in America—and the possible ramifications for home education here. Sadly, the Romeike v. Holder case just shows how anti-Christian the culture has become in America, as the secularists attempt to remove any vestige of Christianity from society. If you homeschool your children, you need to watch this case very carefully—and even if you don’t homeschool, you need to monitor this effort to undermine Christian education and freedom in America.

Thanks for stopping by and thank for praying,

Previous Article Inconsistency and Hypocrisy Abound Next Article Should Christians Not Judge Others?