Skeptics Not Telling the Truth

A recent article in the Skeptical Inquirer made a claim about the Creation Museum that is simply not true. A group of skeptics—two journalists and a university professor—had contacted our Creation Museum’s publicist to inquire about getting complimentary tickets.

The article (see it below) proclaimed the following in bold print:

The visit by Richard Wiseman, Jon Ronson, and Rebecca Watson to the Creation Museum in Kentucky didn’t happen. Recounted Watson: “They said yes, you can film. But you can’t make fun of us. We ended up skipping it.” 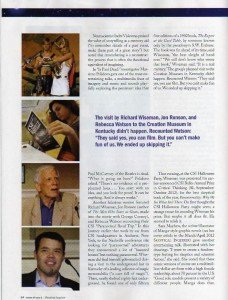 Now, this quote implies that we and our publicist discouraged or prevented them from coming to the museum, based on how they wanted to portray us mockingly. But really, our publicist simply asked them to conduct themselves in a professional manner since they would be touring the museum and interviewing people—as our publicist normally does. So their decision not to tour the Creation Museum had nothing to do with our preventing them. Apparently, they just did not want to pay the admission!

Of course, skeptics are certainly welcome to visit the museum, as long as they won’t disrupt the experience of the other guests. And any paying guests can certainly write about us later in whatever way they wish. We can’t control what they write—we just ask that they be courteous and professional while here.

It frustrates us to hear claims that we supposedly won’t allow skeptics to tour the museum or to restrict them in some way if they won’t promise to write about us in a non-mocking way. It’s not true at all. Our ministry is to share the gospel of Jesus Christ with unbelievers—why would we deny entrance to the Creation Museum to those who don’t believe?

It’s unfortunate that these skeptics chose not to be honest about this situation. But without an absolute authority to help determine right and wrong, would we expect them to be honest in their reporting according to their meaningless and purposeless worldview? I hope that this group will not only reconsider how they’re falsely portraying the Creation Museum but that these individuals will visit like any other paying guest.

By the way, this past Saturday we had a group called the Secular Alliance visit the museum from Indiana, and they conducted themselves in a professional manner, as I was told, as most such groups do. And on Saturday, students from Duke University will visit with their professor. We welcome them.

Previous Article “Ape-men” Coming to the Answers Mega Conference! Next Article Enns Continues to Promote Heresy—Sponsored by a Baptist Church