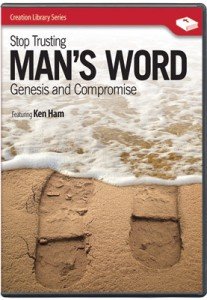 Recently, a news item reported on a presentation I made at an AiG-sponsored dessert during the National Religious Broadcasters convention in Tennessee last week. The article on this presentation was taken up by many other Christian news sites, and it was even reported on some secular blogs.

A number of people have asked if the actual presentation I gave was recorded on video. It was not, but a similar talk I gave late last year was recorded and now is available through AiG. This DVD deals with the many positions of compromise on Genesis and includes many video clips and quotes from book and magazine by Christian leaders, both living and deceased. It’s very eye opening—and in many ways shocking.

You can obtain this video from the AiG online store.

This past weekend Dr. Tommy Mitchell and I spoke at a homeschool conference in Salt Lake City, and then held a two-day AiG conference at Canyons Church.

The homeschool conference had about twice the number of registrants they normally get, and the AiG conference Sunday night at Canyons Church had an overflow crowd—they ran out of chairs. Here is a photo taken Sunday evening:

We do praise the Lord for the phenomenal responses at both conferences—and we also ran out of some of the AiG books.

Previous Article Should Every Christian be a Young-Earth Creationist? Next Article Intolerant Academic