We had a couple of special guests from Australia at the Creation Museum yesterday.

In 1977, two Australian school teachers—John Mackay and I—ran the first major creation seminar in Australia (in Brisbane). At that time, John and I began the creation ministry that started in our home and has had a great impact in that country.

John continues with his creation apologetics ministry through Creation Research (CreationResearch.net) in speaking across Australia and other parts of the world. John is in the USA (he has an office in Tennessee) for the production of a video dealing with creation geology topics. He was accompanied by a mining engineer, Bill Hitchcock. Bill remembers hearing me speak when he was about eight years old!

John also briefly spoke to the AiG staff and gave them an overview of a special project of his, building a unique outdoor creation apologetics center in Australia. He also told of the struggles they had with the devastating floods in Australia last year and how the Lord has used his ministry to reach people with the gospel.

I believe you would all be fascinated to hear John speak and give details of the fascinating ministry he is involved in Down Under (and you will love his strong Australian accent). You can hear this ten-minute overview of Creation Research Down Under here.

Creation Research Down Under 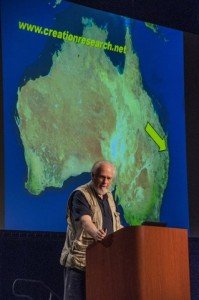 John as he spoke to the AiG staff. 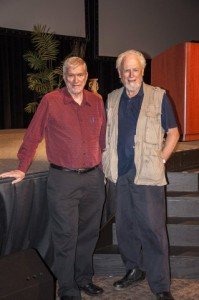 John and me in Legacy Hall. 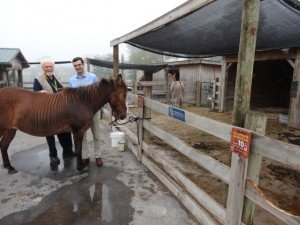 John and mining engineer Bill Hitchcock with the zorse at the Creation Museum Petting Zoo. 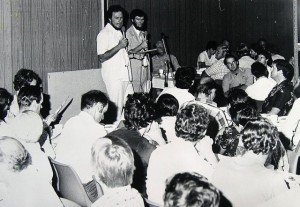 John and me speaking in those early days of the Creation ministry in Australia. 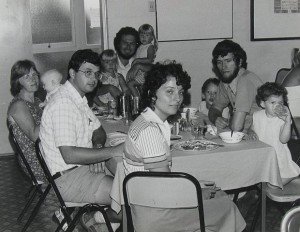 The Mackay family and the Ham family with a very young Dr. Andrew Snelling (AiG’s geologist today—on the left in the photo) in the early days of the ministry.

You can find out more about John’s creation ministry in Australia at CreationResearch.net

John is an excellent communicator, and I do appreciate the fact that like AiG, his creation apologetics presentations have an evangelistic emphasis. I encourage churches in Australia to invite John to speak in their church and run a creation apologetics seminar, etc. It is thrilling to see the way the Lord has used people like John to bring the vital creation apologetics messages to the world today, to nations like my home country of Australia.