An Eight Year Old Read What?

When I first heard about eight-year-old Johann from AiG’s director of research, Dr. Andrew Snelling, I asked Andrew to contact his parents with a view to telling Johann’s story on my blog.  You see, Andrew told me about this young boy who read his massive two-volume work on geology titled Earth’s Catastrophic Past. (These two volumes are the most comprehensive, up-to-date work on creation geology available.)  At first I found this hard to believe, but this really is the case!

I believe this blog post will greatly encourage you, and it’s just another example of how God is raising up a generation of young people who love His Word and want to be equipped to defend the Christian faith against the false ideas of evolution and millions of years.  I think Johann is going to be a formidable opponent to those who mock God’s Word and reject the Genesis account of history!

First of all, here is Johann’s part of the story (he resides in Queens, New York City):

Later, I learned from the “7 C’s” in the exhibits of the Creation Museum, and books written by Mr. Ken Ham knowing that the result of the catastrophe was due to Noah’s Flood. I studied more by reading Dr. John Morris’s book on Geology. Since then, I have been more interested in studying fossils, minerals, rocks and crystals.

In the beginning of this year, my parents received the flyer from Answers in Genesis about the Answers Conference in Old Bridge, New Jersey. We went there on January 29. During the break time, I saw a huge book with two volumes at the bookstore and I started to flip through the pages. The book was called Earth’s Catastrophic Past written by Dr. Andrew Snelling. I like geology and earth science very much so I decided to purchase it. I have finished reading the whole first volume and the part I liked the most was the account of the Noah’s Flood. I learned the precise duration of the Flood was 371 days, and the precise measure of the ark, and the precise number of the animals …

God is wonderful! And when we see the beauty around us, how can it be that it all came by random chance? It is God’s creativity and He made everything. I am thankful that I can learn about these creation facts! I look forward to reading the rest of the book. Here is a photograph of Johann reading this massive work—note the other books in his library behind him: 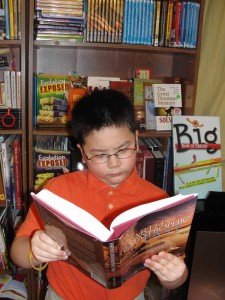 And here is a photograph of Johann and his sister Miriam—both reading creation books: 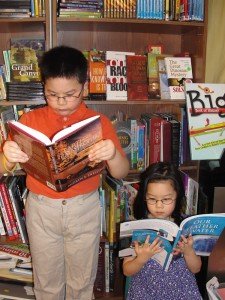 Now here is the story from Johann’s father sent to Dr. Andrew Snelling:

Johann was long fascinated by the resources of you and other AiG scientists. Indeed his entire home library contains mostly AiG publications on creation science. As you know, my wife and I are both musicians. God blessed Johann and Miriam [with] the gift in music (they both made their debut at Carnegie Hall as a result of winning a national competition in violin). They also play piano, but Johann was even more interested in science since he was very little.

My wife and I have been praying for the opportunity that he can learn more about not only the area of creation science, but also how to be a Christian scientist in the secular world. As he was talking to us every day about his new science discoveries, I felt the urge even more. That is why I brought him 4 times to the Creation Museum in the past years and in the end of January when I knew  Ken Ham was doing the Answers Conference at Old Bridge, New Jersey, I brought my family there--and that was how Johann insisted [I] buy your [Dr. Snelling’s] books.

I really appreciate your testimony not only as a distinguished scientist but also as a Christian who has the courage to defend the authority of God's Word and yet was willing to spare time to care about the little home-school children. I am very grateful for you bringing Johann and Miriam for the fossil dig [this was part of a recent conference at the Creation Museum] and I am sure they will not forget this special experience in the rest of their lives. Here is a photo of Johann with Dr. Andrew Snelling on the Creation Museum sponsored fossil dig:

If Johann can read Dr. Snelling’s geology books to learn how to defend the Christian faith and the true account of history in Genesis, then so can each of us! Here is a link on how you can obtain these books from the AiG website.

Previous Article Should We Really Expect Anything Else? Next Article Compare the Billboards: Creationists vs. Atheists