There’s a New Pastor in Town

Over the 18 years that AiG has been in northern Kentucky, we have formed a close relationship with Florence Baptist Church. In fact, our very first offices in 1994 were across the street from the church’s former facility; over the years, I have had the privilege of speaking at Florence Baptist, including at its new beautiful sanctuary right off of I-75 and south of Cincinnati. Unfortunately, the church’s retiring pastor and my friend Tim Alexander has stepped down from his senior leadership position because of health issues, but a dynamic new pastor, Dr. Corey Abney, has accepted the call to the church.

When we noticed that he, his wife, and four children had settled in after moving from Louisville, we gave them a call and asked Pastor Abney to speak at one of our AiG chapel sessions in Legacy Hall. He did so last Thursday and gave a message from 1 Kings. After the message, I was privileged to lead Pastor Abney and his family on a brief tour through the museum (Dr. Abney had not yet visited the museum). Dr. Abney shared with us that he heard me speak at Cedarville University (Ohio) in the 1990s, and then he went on to attend Southern Seminary in Louisville where he earned his doctorate. He became a pastor at a Louisville-area church and then came to northern Kentucky area earlier this year.

We look forward to getting to know this dynamic young pastor even better and are thankful that so many members of his congregation are supportive of AiG, the Creation Museum, and the future Ark Encounter (which is to be built about 25 minutes down I-75 from his church). Find out more about Florence Baptist Church at www.sharingtruth.com. 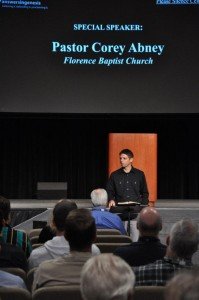