Answers magazine is the most-read creation and apologetics magazine in the world, averaging about 75,000 subscribers. By God’s grace, it’s also one of the most highly awarded publications of the year within the Evangelical Press Association (EPA), picking up the EPA’s top award for excellence and three first-place awards (as well as four other awards). We praise our Creator God!

Last week, two of the magazine’s key staff members, executive editor Doug Rumminger and designer Dan Stelzer, attended workshops and other meetings at the annual EPA conference, held this year in Colorado on the beautiful campus of Focus on the Family in Colorado Springs.

Each year members of the association, which includes publishers from many doctrinal backgrounds representing publications of all types, from denominational newspapers to international glossy magazines, meet to network and learn from each other. Attendees also benefit from expert seminars in the different disciplines of publishing—writing, design, editing, increasing circulation, and so on. Answers sends representatives in order to keep abreast of the latest trends and participate in developing best practices with others on the cutting edge of Christian publishing.

On the final day of this year’s three-day event, the association presented awards for excellence in several categories. Even though Answers is one of the youngest periodicals in the EPA, it has already gained a reputation as one of the premier publications, competing with well-known magazines like Christianity Today and Focus on the Family’s own Thriving Family, among many others.

This year, Answers was recognized for the second year in a row with the “Award of Excellence” in the General Magazine category. The Award of Excellence is considered the “gold medal” of EPA awards. I’ve been told it is unusual to receive this high honor two years running. With the wide range of doctrinal positions represented in the EPA, it’s especially gratifying to see that Answers—a magazine that stands firmly for the absolute authority of God’s Word—has been recognized again and again for its high quality. According to Doug and Dan, a common response among EPA members there at Colorado Springs was a desire to see this magazine that has won so many awards.

In addition to winning the Award of Excellence, Answers picked up several other awards at the “Higher Goals” luncheon on Friday, including three first-place finishes: Best Cover, Best Two-Page Spread, and Best Original Art (Traditional). 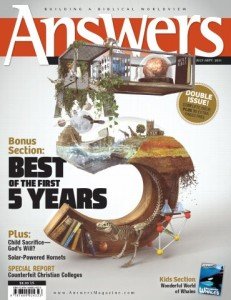 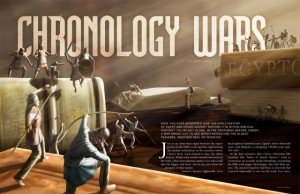 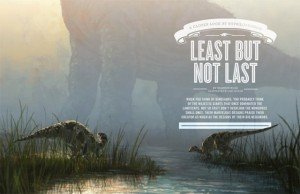 Dan Stelzer and I were sitting at a table with the staff of Focus on the Family’s main magazine, Thriving Family, during the awards luncheon. After Answers had been recognized seven times, including the three first place awards, several at the table wanted a copy to see what it was all about. They couldn’t wait to see for themselves this magazine that was winning so many awards. Through the whole conference, we heard compliments for the magazine’s content and excellent design.

The daily operations of Answers magazine are coordinated by editor-in-chief Mike Matthews, under the leadership of our VP of Media, publisher Dale Mason. Numerous AiG staff, such as PhD scientists like Dr. Andrew Snelling (who takes a very active part in reviewing articles for scientific accuracy) are involved in writing and fact-checking each new issue, and it was great to see the various writers and artists (both internal and external to AiG) recognized for their parts that result in such a great publication.

We were thrilled that AiG also won three first place awards. One was for original art for Jon Taylor’s dinosaur illustrations. (Jon was a main illustrator for our Creation Museum and now is working on some incredible designs for the upcoming Ark Encounter.) The two-page spread design that took first place was the “Chronology Wars” article, which used an illustration by museum sculptor Travis Wilson. Our final first place category was the striking cover, which was art done by an accomplished outside illustrator, Barton Damer, who worked under the direction of Dan Stelzer. That striking cover won two other awards as well!

The EPA is an effective way to get the message of Answers magazine before a larger audience well beyond AiG’s normal reach. Many of its members may not have had much contact with Answers in Genesis, and many would not be inclined to read the magazine because of disagreement with our strong stands on a literal Genesis and biblical authority.

This year’s eight awards are as follows: 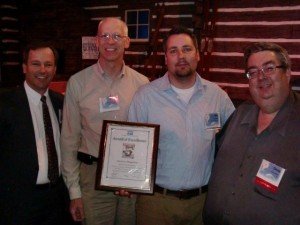 If you have not already subscribed to Answers, I urge you to do so.