Last week on the campus of Butler University in Indianapolis, a lecture was given—actually a diatribe—by two instructors about our Creation Museum, located about a two-hour drive away. (Short but revealing bios about the lecturers are found in the footnote below.*) Two AiG supporters attended the presentation and took careful notes. One of the two indicated to us that his notes “are not tainted in some way and were true to the facts of what was presented.” A second person corroborated what will be summarized below.

The two people who gave the lecture are writing a research paper that will discuss our museum and it will be released in a few weeks, and so as we correct the errors made in their lecture, it will only make their research paper be more accurate. We will expose their research sloppiness here on this blog.

Our two correspondents took issue with the lecturers’ contention that our Creation Museum should not even be called a museum. The lecturers indicated that the Creation Museum does not have a “collection” that is “required” of any museum. We find it amazing that these researchers somehow missed cases upon cases of our fossils, minerals, insects, meteorites, etc. In fact, a reviewer with the New York Times indicated after he toured the new museum in 2007, it was his opinion that we had “extraordinary nautilus shell fossils.”** Also, we have one of the finest mineral collections in the Midwest—though only a portion of it is on display.

Below are just a few of the cases inside the museum—real museum collections. 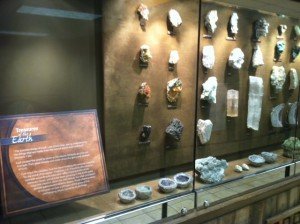 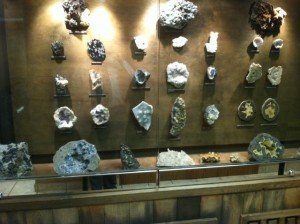 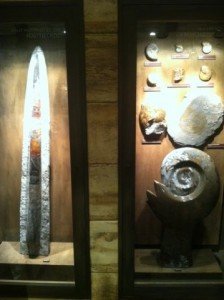 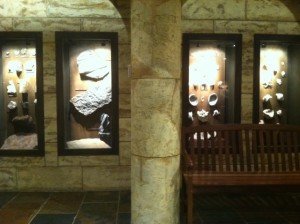 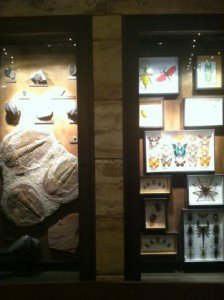 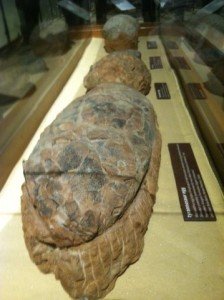 Now, the AiG supporters who took notes told us that the lecturers talked about “replicas” in our museum. And we do have some—our dinosaur models were sculpted, of course. But the photos of the cases above show real fossils, real minerals, real dinosaur eggs and bones, real meteorites, etc. (and we have other cases we did not include above). 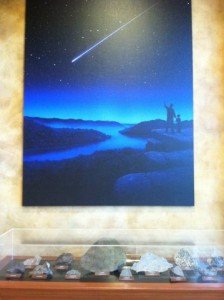 An impressive display of meteorites can be seen near our planetarium.

Whatever academic seriousness the lecturers possessed was undermined by the constant mocking of the creationist position. The lecturers even said that scientists were not consulted in designing the museum exhibits. That is patently false. Not only did AiG have several staff scientists with earned doctorates (PhD degrees in astronomy, genetics, biology, etc.) who oversaw the exhibit constructions, but scientists outside AiG were also consulted. One of the best known consultants was Dr. Kurt Wise, who earned his doctorate in paleontology from Harvard under perhaps the world’s most famous evolutionist at that time, Stephen J. Gould.

The researchers also suggested that whatever fossils and artifacts we had on display were donated. While many items were generously given to us by supporters, there are also items that required payment—including one of the best-known fossils in our collection, a horseshoe crab (where the last minutes of its life are shown). 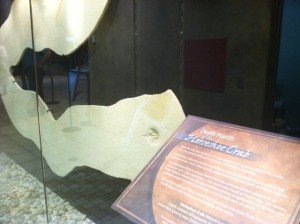 The use of words like “Genesis myth” and the term “disingenuous” further revealed the hostility that these researchers showed about their subject. They also made fun of the motto of the museum, “Prepare to Believe,” and said that guests instead should be “prepared to think.” Actually, we agree to some extent here. As people go through our museum, we encourage them to think critically. In fact, we often present the evolution position side by side with creation, and urge guests to use their critical thinking skills to determine which model, evolution or creation, best interprets the evidence.

The researchers chided our “Lucy” display. For some very compelling evidence that Lucy is not a transitional form between modern humans and an ape-like ancestor, see “Farewell to ‘Lucy.’”

Also, return to this website next month, when we reveal the opening of an enlarged museum exhibit about Lucy.

At the end of the presentation, the Butler instructors implied that the museum is some kind of a danger to society—that it should not be given any credibility. I find it somewhat amusing that with literally hundreds of museums around the United States—and with evolution being presented as virtual fact in our schools and through the media—that one museum poses such a threat!

It is interesting to note that the two presenters do not have degrees in science (see their bios below), and yet a good chunk of their talk discussed the validity of the evolutionary belief system. The instructors are employed in the communications department of Butler U., and while it is certainly fair for them to evaluate how our museum communicates messages through its exhibits, it is another thing entirely for them to communicate so many wrong statements to their audience last week.

Now, our museum declares that all who study the topic of origins have starting points, but that we believe the Bible explains our world around us. These Butler University researchers would probably argue that they are unbiased researchers employed in the communications department of the university, and they are merely giving their straight-forward view. But all of us have presuppositions and biases that color our beliefs about worldview questions, and it’s especially so with the creation/evolution question, for we are ultimately dealing with what’s called historic science, not operational (observational) science.

It’s a pity these two communication lecturers failed to communicate—in so many ways—to their audience.