Another Opportunity for the Ladies

If you missed the wonderful “Evening To Remember” dinner/theater event here at the Creation Museum last week, you'll be  pleased to know that Geri Campbell will be offering an encore performance of  The Story of Gomer—a beautiful love story adapted from the Old Testament book of Hosea. It’s a big part of one of the evening sessions of our national women’s conference “Answers for Women” coming in April. 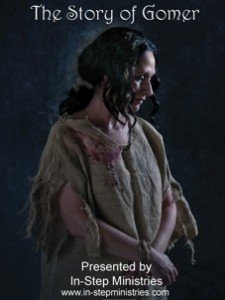 After a day of biblical teaching especially for women by well-known speakers like Dr. Georgia Purdom of AiG and Mary Mohler, conference attendees can relax and enjoy a special evening of Christ-centered theater. Geri shared with me that: "I think women in general really struggle with the issue of forgiveness.  The enemy loves to bring up the past. I have been portraying Gomer, a woman who is forgiven and loved, for eight  years now, and it still brings me to tears when I get to the end where Hosea buys her back.  That is what Christ did for me, even when I didn't deserve His mercy. "

Geri added: “Come and be prepared to experience God's love in a deeply personal way during the Thursday evening session as we present The Story of Gomer.

Register for our early-bird discount by February 29 and you will save 15%. And you will save an additional $10 per person when registering as a group from the same church. Go to www.answersforwomen.org.

Several years ago Doug Phillips and his team at Vision Forum Ministries launched what has now become the premier Christian film festival in the world. Next week in San Antonio, Texas, over 2,500 Christians will converge just blocks from the famous Alamo in central Texas to take part in the “San Antonio Independent Christian Film Festival” (SAICFF).

One of our ministry VPs, Dale Mason, shared with me that: “This exclusively Christian-worldview festival features entries from a wide variety of Christian filmmakers, in wide-ranging areas, including; feature films, documentaries, Creation films, Great Commission films, short films, promotional media, commercial advertisements, and even a very special category exclusively for Young Filmmakers. SAICFF ends with a gala awards ceremony with thousands in attendance at the historic Cockrell Theater on Saturday evening, February 25.”

Answers in Genesis is blessed to have five different productions reach the semi-finalist level. But Dale informs me “the field of competing films is truly stiff! We have already seen several of the dozens of other films which have also made semi-finalist level, and I assure you there are a number that are top-notch—as good as what you would see on PBS and in a few cases even at the movie theater!”

There is still time to plan to attend the film festival, and even the popular three-day film academy that precedes the festival. (The academy itself will be attended by about 500 zealous--amateur and professional—producers, directors, actors and writers.) Dale tells me this is an amazing event for Christians who are looking for contacts, encouragement, and to learn from people who are top-level in the field.

Here is a listing of the AiG productions that are in the running for an award. Check here to see the full list and images of the films that have progressed to semi-finalist status!

I praise the Lord for people like Doug Philips who had the vision for such an important festival for Christians.

I am in Nashville, Tennessee, for the next few days for the National Religious Broadcasters Convention. We are being blessed with a major national award from the NRB (it’s made up of 1,200 media ministries). I will send updates on this to my Facebook, including the kind of special award AiG is receiving.