Upwards of 1000 people attended various sessions at the All-Asian Creation Conference in Malaysia this week. Twenty countries were represented. It was amazing to meet people from Nepal, Italy, India, Indonesia, Japan, Taiwan, Australia, USA, England, the Philippines—and the list goes on.

After the first session Tuesday afternoon, most of the AiG resources were purchased in a matter of minutes. Some people literally ran back to the book tables so they wouldn’t miss out. I must admit, I have never seen such hunger for the resources—it was truly amazing to watch. Many were disappointed they missed out on certain items.

I received many testimonies from people telling me how they are already using AiG resources in their countries. It is amazing how God has taken AiG material around the world. I really have not realized how much God is using AiG and the resources He has enabled us to produce to reach into places I have never heard of before. It is thrilling to hear testimonies of people who have been led to the Lord through them.

But something has stood out to me more than anything else at this conference, and it burdens me so deeply.

After I spoke a person came up to me and said, “Please bring a conference to Indonesia—most of the pastors there believe in evolution.”

Then another person said, “Please come to my country—most of the pastors believe in evolution.”

Then another said, “Please come to my country—most of the pastors there believe in evolution.”

There were 20 countries represented at this conference, and I think I have now heard from people from nearly all of them pleading for a creation conference in their country. They have all have said to me something like, “most of the pastors—Christian leaders—seminary professors—believe in evolution and millions of years.”

Friends, disbelief in the book of Genesis is a worldwide epidemic. Satan has used millions of years and evolution to permeate the church around the world. What a mission field we now have to the church. And in particular, what a mission field we have to reach the “shepherds,” the Christian leaders and pastors around the world to call them out of compromise and back to the authority of the Word of God.

I think this one conference has made me realize even more than ever how the pagan religion of millions of years and evolution has so permeated the church around the world! What a mess! And sadly, countries like the USA and England have sent missionaries around the world teaching this compromise message because they were trained in compromised colleges and seminaries.

This makes me more burdened than ever to challenge these compromising church leaders.

And you know what else this conference in Asia has shown me? There is a real hunger among the people—hunger for the truth. It is a hunger for answers. When people who do have a respect for God’s Word are given answers and taught the importance of not undermining biblical authority in Genesis, they get it. They really get it! And then they are set on fire to go back to their country and be a missionary for creation evangelism.

Here are some photos taken at the All-Asian Creation Conference in Malaysia this week. 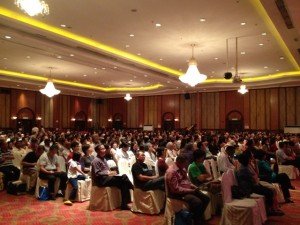 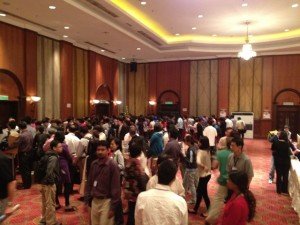 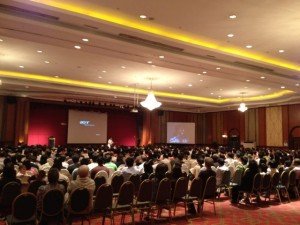 There are also many people talking about establishing creation apologetics ministry in their countries with a close association with AiG. The fascinating thing is that many of the creation organizations already in existence or those wanting to start such are headed by scientists. This is another worldwide phenomenon—scientists telling people the Bible is true in Genesis while many of the theologians are saying it is not!

Please pray for the Lord to open more doors so we can deal with this compromise epidemic that is undermining God’s Word worldwide.

Previous Article We’re off to Nashville—for a Bible Bee! Next Article College Expo 2011