Randall Stephens is an associate professor of history at Eastern Nazarene College. He, along with former professor of physics at the same college (Karl Giberson), wrote an op-ed piece in yesterday’s New York Times to help publicize their new book The Anointed. AiG has written a preliminary response to this book, showing that it is poorly researched and really is an attempt to attack AiG, the Creation Museum, and other Christians who are committed to biblical innerrancy and the proclamation of the gospel in this secularized age. Go to this link to see our article on The Anointed.

In the article linked to below, the authors state the following:

Mr. Ham built his organization, Answers in Genesis, on the premise that biblical truth trumps all other knowledge. His Creation Museum, in Petersburg, Ky., contrasts “God’s Word,” timeless and eternal, with the fleeting notions of “human reason.” This is how he knows that the earth is 10,000 years old, that humans and dinosaurs lived together, and that women are subordinate to men. Evangelicals who disagree, like Francis S. Collins, the director of the National Institutes of Health, are excoriated on the group’s Web site. (In a recent blog post, Mr. Ham called us “wolves” in sheep’s clothing, masquerading as Christians while secretly trying to destroy faith in the Bible.)

Well, I did write a blog post entitled “Beware of Wolves.” In that post I stated the following:

In the Old Testament, over and over again we find that many “shepherds” (leaders) led the people astray. And in the New Testament, we read of many examples of religious leaders who were teaching things that were in error, leading people away from the truth of God’s Word. The apostle Paul mentioned many of them by name. . . .

Yes, as harsh as it might sound, today there are shepherds in the church who are also “wolves”—they have infiltrated the church with their destructive teaching. I then clearly stated,  “Now, I am not saying these wolves are not Christians—I suppose the term can fit Christians as well as non-Christians.”

I also stated the following in the article:

One such example is seen clearly in the writings of Dr. Karl Giberson. Until recently, he was a physics professor at Eastern Nazarene College in Massachusetts—probably leading many students astray about the Bible’s authority with his compromised teaching. He has been involved with the theologically liberal BioLogos Foundation and recently co-authored a book (The Anointed, published by a division of Harvard University Press) with Eastern Nazarene College history professor, Dr. Randall Stephens. (By the way, Dr. Darrel Falk, a Nazarene professor in biology at Point Loma Nazarene University in San Diego, has also similarly written against AiG and the literal creation position.)

Stephens and Giberson have once again misrepresented what I stated with what I would call a “cheap shot.” They claim, “Mr. Ham called us “wolves” in sheep’s clothing, masquerading as Christians while secretly trying to destroy faith in the Bible.”  The Bible certainly states there are “wolves” from without the church and from within. And for those within, only God knows their heart, but I clearly wrote in my blog post that “I am not saying these wolves are not Christians.” We have been totally misrepresented in this Times’ op-ed.

It seems to me that the co-authors have also made another cheap shot with their comment about women (“are subordinate to men”). I have always stated that men and women have different roles, and they need to submit to each other (as the Scripture teaches) in those roles. I think they are implying something else in the way they wrote the commentary. Not only that, but I remind husbands that they are to love their wives to the extent they would be prepared to die for them, and I often cite, “Husbands, love your wives, just as Christ also loved the church and gave Himself for her” (Ephesians 5:25).

And yes, biblical truth does trump the fallible ideas of sinful man who has a heart that is “deceitful above all things and desperately wicked” (Jeremiah 17:9). I make no apology about taking such a stand!

Here is the link to the op-ed.

It is so thrilling to see so many pastors (and their wives), who are committed to standing on the authority of God’s Word in Genesis, attend AiG’s pastors and Christian leaders’ conference this week at our Creation Museum. The following are some photos taken yesterday: 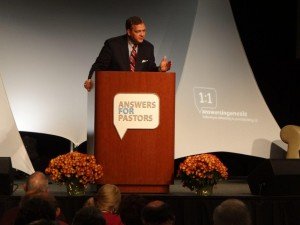 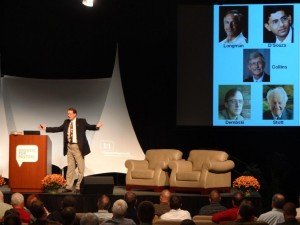 AiG’s Dr. Terry Mortenson as he addressed the conference

Some of the audience in the Creation Museum’s Legacy Hall