International Press on the Ark Encounter

This past Friday, a reporter and a photographer from Stockholm, Sweden, were here at the Creation Museum to write an article about the museum and the future full-size Noah’s Ark at the Ark Encounter attraction south of the museum. The global interest in the Ark project has exceeded our expectations since the Kentucky governor first made the Ark announcement late last year from the state capitol. In fact, below is a list of print editions of international newspapers (in addition to dozens of U.S. papers and websites) that recently ran an Associated Press syndicated news story on our Ark Encounter. The ones below all appeared during the last part of August. (The AP article, as it appeared on the Fox news website, can be read at this link.)

All of these have been added to the special website where Ark-related articles are being cataloged: http://wiki.creation.org/2011_Ark_Encounter_news

Lovebirds Jan and Bob Thompson are longtime Answers in Genesis volunteers who have been married 59 years. Yesterday was their wedding anniversary, and we honored them at our staff chapel. In the photo below, they enjoy sharing some Brusters ice cream (the butter pecan flavor) inside the Creation Museum: 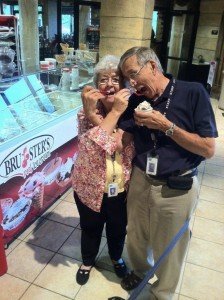