Here is a copy of the Answers magazine press release sent to media this past week by our publicist. Also, note the “super issue” news at the bottom.

PETERSBURG, Ky., May 13, 2011 – At its annual convention in Chicago last week the Evangelical Press Association (EPA) honored “Answers” magazine, produced by Answers in Genesis (AiG), with its Award of Excellence, selected from among 300 other Christian periodicals. The ministry, which started publishing the magazine only five years ago, was also commended in  other categories related to the quality of writing and artwork included in “Answers” magazine.

Known for honoring the best work done by its member publications each calendar year, the EPA includes 12 magazine categories, such as Campus, Denominational, Devotional, Missions, Newsletters and Newspapers. This year, "Answers" was recognized as # 1 overall in the esteemed “General” category. Runners-up in the category were "Books & Culture," "Christianity Today" and "Sojourners."

“EPA’s ‘Awards of Excellence’ competition honors the best work being done in the Christian periodical publishing industry,” said EPA president Doug Trouten. “The judges look at a wide range of factors, including journalistic creativity, writing, design and overall impact. Each year, our judges are impressed by the outstanding quality of the work being done by our members. Best of all, the talented people who create our winning publications are using their gifts to serve God.”

“Answers” magazine, now with over 75,000 subscribers and growing, is the world’s leading creation apologetics and worldview magazine. Other awards it won at the EPA conference include the following “Higher Goals” awards:

In addition to the main magazine and website, each issue includes a special pull-out children’s section, “Kids Answers,” and associated website. A quarterly publication, the magazine includes articles written at both layman and semi-technical levels, and subscribers receive additional exclusive content online.

Answers magazine will feature a “best of” 192-page special issue this July. (Cover is not final, by the way.) Don’t miss out. You may subscribe now on the online store. 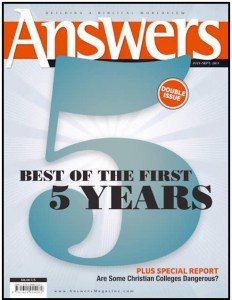