I praise the Lord for the vision of AiG VP Dale Mason in founding this publication, and overseeing it so that every powerful issue greatly impacts people of all ages. Each magazine has a free fold out chart or poster, and there is a mini magazine for young children in the center of each issue.

There are two websites associated with the magazine—one for the magazine itself and one specially for kids.

We were thrilled to find out yesterday that Answers magazine received five awards from the Evangelical Press Association. One of those awards received was the top award (Award of Excellence) for the general category.

The 2011 Awards of Excellence prizes were presented at the Evangelical Press Association’s annual convention, held May 4-6 in Chicago. The contest honors the best work done by EPA publications during the 2010 calendar year.

There are 12 magazine categories, including campus, denominational, devotional, and missions plus newsletters, newspapers, and others. Answers magazine was judged alongside nearly 200 publications, which are members of the EPA. This year, Answers was recognized as the number one overall in the esteemed general category. Runners-up in the category were Books & Culture, Christianity Today, and Sojourers.

Congratulations to Dale, Mike Matthews (lead editor), and all the Answers magazine team. A special congratulations goes to the head graphic designer and art director for the magazine—Dan Stelzer. Without his God-given talents and expertise, the magazine would not be the cutting edge publication it is.

At Answers in Genesis, we praise the Lord for staff who continually produce first-class and highly professional resources, museum exhibits, etc. That characteristic has become a trademark of the AiG ministry.

Here is a photo of Dan as he received the “Award of Excellence.” 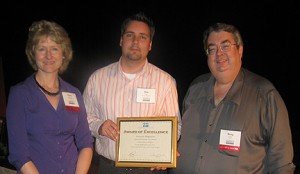 We do have a very special super issue of Answers coming out this year—keep watch for this incredible special edition issue you won't want to miss.

Previous Article Free MP3: Dinosaurs for Kids (of All Ages!) Next Article How Many Christian College Students Are Being Taught This Way?