Yesterday, we had a special guest speaker in our morning staff meeting. Daniel Knudsen is one of six children of Mark and Michelle Knudsen in Michigan, who are long-time friends of AiG. Daniel showed us the paper that AiG’s Buddy Davis drew (a dinosaur) and signed for him at a creation seminar his family attended when Daniel was young boy. He also remembers going to one of my student programs as a young child. He didn’t really want to tell me how old he was then, but it was when he was five or six—does make me feel old!

Here is a photograph taken of me with Daniel after he spoke to the AiG staff: 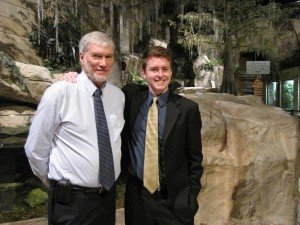 Now 22 years old, Daniel recently graduated with a degree in humanities from Verity Institute in Indianapolis. He has a great passion to produce films for the secular movie theaters that will challenge Christians and non-Christians to think, and also plant seeds that will one day lead many viewers to a saving knowledge of Jesus Christ. Creed of Gold is his first film, which he directed. Made by Crystal Creek Media, a film company started by his family, it will premiere in Indianapolis on May 6, and prayerfully it will be picked up by a major distributor to be released in movie theaters across America later this year. You can see a trailer for the film on the home page of Creed of Gold .

Hopefully you will be able to see this movie in a theater near you sometime this year.

It is thrilling for us to see so many people like Daniel who have been greatly influenced by AiG, and now they are involved in influencing others.