Last week, Pastor Paul Crosson, an associate pastor at Tri-County Baptist Church in Ohio (Cincinnati area), visited the Creation Museum. He related more of the details as to how the Creation Museum obtained the replica of a Gutenberg Press for the biblical authority exhibit area.

Quite a number of years ago, a man named Glen Davis had a burden to build a replica of this famous printing press and use it as a witness at a secular festival. Another man called Bill Miller, a wood worker, built the press for him.  Glen eventually moved out of the area and the press was stored at Tri-County Baptist church for a number of years. Then when Pastor Paul Crosson was on a behind-the-scenes tour of the construction of the Creation Museum, the tour guide said something like, “one day we hope to get a replica of a Gutenberg Press for this area.” Paul then told us about the one sitting at his church. The church then donated this to the Creation Museum. Since then, our talented artists have restored this press, and it is now a very classy exhibit in the biblical authority room.

Here are photographs of Paul Crosson and I standing in front of the press in the exhibit at the Creation Museum: 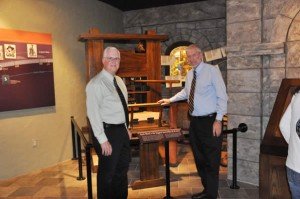 By the way, here is just a little information about such a press:

Johannes Gutenberg, a goldsmith and businessman from the mining town of Mainz in southern Germany, borrowed money to invent a technology that changed the world of printing. Johannes Gutenberg invented the printing press with replaceable/moveable wooden or metal letters in 1436 (completed by 1440). This method of printing can be credited not only for a revolution in the production of books, but also for fostering rapid development in the sciences, arts and religion through the transmission of texts. (http://inventors.about.com/od/gstartinventors/a/Gutenberg.htm)

The Gutenberg Press was used to print Bibles, and was a form of “mass communication” of its day that made the Reformation possible—as God’s Word was spread throughout Europe (and eventually the whole world).

We had a great response to the AiG conference in Georgia.  This evening, Dr. Lisle and I will give the final two presentations of this conference.

Here I am with Pastor Rhys Stenner of New Hope Baptist Church (with two locations) of Fayetteville, where Dr. Jason Lisle (shown in the pulpit) and I spoke this weekend: 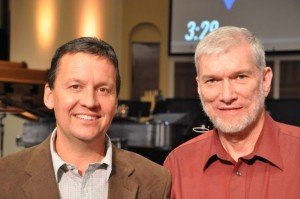 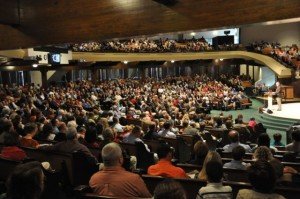 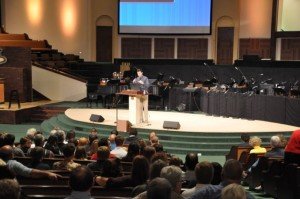